OLIVE oil, parmesan, fusilli and penne pasta, grapes, pomegranate, basil, eggplant and apples elegantly arranged on a large table with autumn leaves and a small Italian flag leave no doubts about the type of cuisine that Roberto Martini and his wife Flavia were about to introduce to their audience. 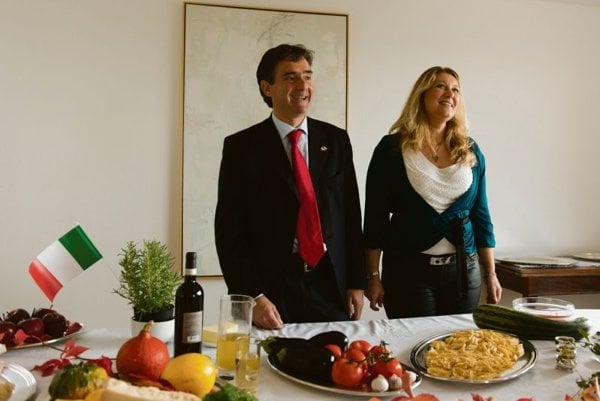 Mediterranean cuisine is very healthy because it is made from simple ingredients, a lot of vegetables and olive oil, while most of these ingredients are easy to find at any local market, the ambassadorial couple explained.

To demonstrate Italy’s culinary diversity, the Martinis picked a risotto dish from the northern part of Italy and a pasta dish with eggplant from the southern part of the country, Sicily, stressing the diversity in the dishes and the ingredients their homeland offers.

“You start with risotto in the north; then you go through Tuscany, where you can have pesto and then Bolognese sauce, going further down to pizza, and then you can have fish in Sicily and Sardinia,” Martini told the Cooking with the Ambassadors programme, prepared by The Slovak Spectator and TV Sme, explaining that the diversity comes from Italy’s long history as well as the time when it was made up of smaller states, such as Florence, Siena, Parma and Naples. “All these states had relations with foreign countries and this gives us such a rich cocktail of cuisine.”

When talking about Italy’s iconic food, pasta, Flavia Martini willingly shared her secret for cooking it ‘al dente’, so that it is firm but not hard.

When the instructions say the pasta needs to be cooked, for example, for 10 minutes, the wife of the Italian ambassador would cook the pasta only for seven minutes in water and then the remaining three minutes in a pan with the sauce: “It is very important that the pasta is not overcooked”.

As for concerns that pasta dishes might be fattening, Flavia Martini suggested that if consumed reasonably it is actually not the pasta which might add some extra kilos to the bodies of the pasta lovers, but rather sauces that are too creamy or contain other fattening ingredients. She recommends sauces made from fresh vegetables, which are easy to make. One can also serve cold pasta with tuna fish, fresh tomatoes, basil, olive oil and some fresh parmesan, which “is better than bread”, Flavia Martini said.

According to Ambassador Martini, food for Italians is not only about the ‘what’ but also about ‘how’, while he explained the philosophy of ‘slow food’, which is intended to counter fast food.

“Take your time to sit around the table and enjoy the food,” Martini said. “Slow food protects biodiversity and zero-distance products, which means that you should eat products which are not transported from distant places, while these products are mixed in a very simple and healthy way.”
When asked about his experience with Slovak food, Martini readily listed the cabbage soup kapustnica as one of his favourites, and cited some similarities between Slovak and Italian cuisine: “you have halušky, which reminds me of Italian gnocchi”.

One difference, however, is the time for dinner, as Italians, who love going out to eat, would normally eat around 21:00, while dinner time in Slovakia is mostly around 18:00 or 19:00.
“The more south you go, the later you eat,” Martini added.

The ambassadorial couple would serve the risotto with white wine or rose, while red wine goes better with the pasta due to its stronger flavour. Martini noted that “Italy has more than 70 top quality wines ranging from the northern part of Italy, like Piemonte Lombardia or Veneto, down to Tuscany, which is the region that we come from, or down to the south”.

Italian cuisine:
Pasta with tomatoes and melanzane
Risotto with squash