How about you slow down and take a look at Bratislava on a more authentic level? You can eat fried fish at sunset on the Danube or swim in a lake in the middle of Petržalka’s tower blocks. You can hang out with Bratislava’s answer to Charles Bukowski, or join the aliens that once landed in the city. You may think you have seen all that this place has to offer, but there is much, much more than meets the eye. 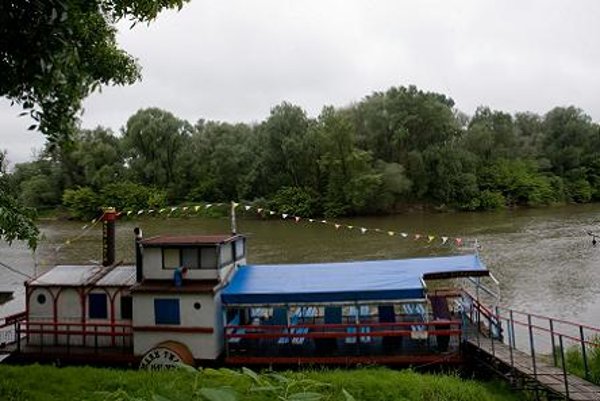 How about you slow down and take a look at Bratislava on a more authentic level? You can eat fried fish at sunset on the Danube or swim in a lake in the middle of Petržalka’s tower blocks. You can hang out with Bratislava’s answer to Charles Bukowski, or join the aliens that once landed in the city. You may think you have seen all that this place has to offer, but there is much, much more than meets the eye.

Bratislava is full of strange little wonders not listed in the tourist guidebooks. Some of them are hard to find, even for locals, but getting lost in Bratislava can be one of the most rewarding things to do. And with a few special recommendations, even vegetarians and those on a gluten-free diet can find places to feast in the city.

Some may call this a guide to “alternative Bratislava”, but for others, this is the page that will keep them sane and alive.

CLOSE TO THE RIVER

Bratislavans love rivers and one of the best places you can go to get close enough to touch the Danube is the Mark Twain Club, a charming old anchored boat, like the one Huckleberry Finn might sail down the Mississippi, which was converted into a pub almost 19 years ago.

The Mark Twain is situated in a small bay near the Canoe Club (Kanoistický Klub Karlova Ves) and provides not only a magical view, but also occasional guitar players picking out the blues as well a barbeque on which you can cook delicacies of your choice. It is well off the beaten track, but as rowers drift by, to the soundtrack of singing birds, it is well worth the trouble to seek it out. “It’s a place out of time,” said Barbara Lamoot, a 41-year-old artist.

There is a slightly different water experience to be next to the shipyard of Lodenica Vlčie hrdlo, where there is a seafood canteen in the quiet, industrial bay, surrounded by retired houseboats and old ferries. Although it may sound unappealing, it is a remarkably popular and unusual place to take a deep breath after a hard working day.

When ordering a food in the canteen, you will be given a number, which will be called by microphone when the food is ready. It is the perfect motivation to learn to count in Slovak, or else you might end up hungry. (To find this place, it’s not the time to be brave: take a taxi.)

Another perfect spot from which to take a moment to admire the surroundings is at Sandberg (literally a sandy hill), at the end of Slovinec Street in Devínska Nová Ves. Years ago, this area, which is now close to the Morava River and the border with Austria, was all under water: fossils have been found here dating from 14 million years ago, as well as fragments of whale bone. Some parts of the area is highly protected and entry is restricted, but it is a charming place surrounded by irises and colourful birds reminiscent of parrots.

WANDERING AROUND THE CITY

It is slightly more urban in the area of Palisády. You are free here to get lost along the streets, discovering its romantic old villas and more functional modern buildings. There is also an old cemetery on Šulekova Street and the famous Kochova záhrada (garden), which however can be admired only through a fence. If you then cross the SNP Bridge on foot, you will be in the middle of Petržalka, the biggest housing project in central Europe and hardly a place renowned for its tourism appeal. But you can swim here in Draždiak lake and know that your experiences from a visit to Bratislava are considerably more than typical.

If, through all this, you still feel a little out of place, then take a moment to hang out with fellow alien beings: there is a statue of a UFO in the middle of Bieloruská Street in Medzijarky. Its somewhat run-down condition suggests what might happen to any poor aliens landing on this predatory planet.

Even aliens have to eat sometimes, however, and vegetarians or gluten-free eaters, behold! It is possible for you to find suitable food in Bratislava. The chef at the Beer Palace on Gorkého Street comes from the famous vegetarian restaurant Vegetka, the only Bratislava restaurant at which people were willing to queue for half an hour just to get lunch. There are two other vegetarian options on Obchodná Street–Govinda and City Vegetarian restaurant–plus Veg Life on nearby Mickiewicova Street.

Various gluten-free choices can be also found in the pizza restaurants O Sole Mio and Pizza Mizza and, in case of emergency, at fast food outlets in Marianska Street. You can also get a buckwheat pancake at Funky Punky pancake house. You can also find a tasty and affordable dinner on the terrace of Prašná bašta and at Verne restaurant, although it’s not necessarily gluten free. If you are lucky you can join a seasonal vegan feast in the Club Intergalaktická Obluda, where people come and share their homemade vegan food.

Alternatively, every Saturday morning you can buy fresh vegetables from local farmers at the marketplace on Žilinská. There is also the seasonal open-air market Dobrý trh (Good fair) in Panenská Street, which offers a mixture of bio food, designer products, antiques and a street art programme. More traditional handmade gifts can be found at Polymorf on Kapucínska Street, a gallery of modern Slovak folk art containing the wares of more than 50 Slovak designers.


After night falls, Bratislava comes alive and few places offer as much diversity as the old YMCA building on the corner of Šancova and Karpatská Streets. According to Peter Wilfling, 34, an advocacy and human rights lawyer: “It contains six pubs and clubs mixing together punks, metallers, hipsters and lost souls…It is Bratislava, Boulevard Montparnasse and Camden Town all in one.”

Similar brave and lonesome hearts–who may find themselves more at home with Charles Bukowski than in posh, soulless bars–can find in Bratislava the kind of retro, low-cost pubs that feel as though they will collapse when their last regular leaves for the night.

According to Wilfling, the Kop saloon pub, on the corner of Kollárovo námestie and Živnostenská street, is: “a small bizzare place with walls covered by old musical instruments, paintings of naked lesbian vampires, communistic icons, the armour of Roman legionnaires and idyllic countryside drawings.”

There is also an anatomically accurate statue of a naked female torso, leaving little to the imagination, and air is thick with clouds of smoke from the old barflies, all behind a sign reading “Módny salón”, or “fashion salon” on the front wall. Maybe also try Bistro Vanesa, which also hosts small exhibitions and occasional improvised musical recitals, all beneath an extraordinary old-fashioned ceiling.

“For me its a piece of old Bratislava,” said Hela Boldišová, 26, a coordinator of a dance group, of Bistro Vanesa. “It is an authentic pub with good quality beer, for a good price, in the centre of the town with a pleasantly severe barmaid and underrated artists as guests.”