SLOVAKIA’s oldest cultural heritage institution, which has repeatedly drawn criticism from Slovak media and intellectuals in the past, re-elected its chairman, despite some in the board deeming him a “dictator”. 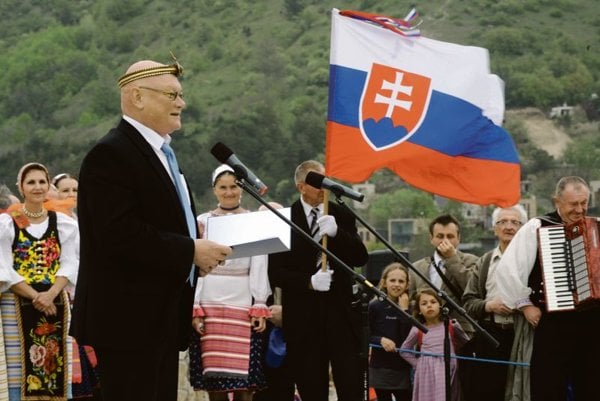 SLOVAKIA’s oldest cultural heritage institution, which has repeatedly drawn criticism from Slovak media and intellectuals in the past, re-elected its chairman, despite some in the board deeming him a “dictator”.

The election took place on October 18 amid conflicts within the organisation. Marián Tkáč, one-time deputy governor of the Slovak central bank, who has led Matica since 2010, was re-elected to the post for another four-year term with the support of 254 of the 440 delegates. He ran for the post against two other candidates: Igor Kovačovič (143 votes), a former deputy head of Matica Slovenská, and Roman Michelko (43 votes), a former member of the Matica Slovenská committee.

Prior to the election, Tkáč followed the example of Kovačovič and pledged to give up his salary. He will thus not be paid for his work for Matica.

“I want to offer peaceful cooperation to all who were against me, but had not crossed a certain border,” Tkáč said, as quoted by the SITA newswire. The media has suggested that a ‘cleansing’ of the institution can be expected in the days to come.

The elections for the posts in the executive committee, which also took place on October 18, have most likely changed the distribution of power within the institution. Until the election, Tkáč faced strong opposition among the committee members, but after the election he might expect the committee to support him, the Sme daily wrote.

Tkáč’s opposition had criticised him for governing the institution as a dictator and repeatedly accused him of economic mishaps and cronyism. His governing style also attracted criticism of some committee members in August 2013, when Matica distributed awards to various Slovak VIPs at the occasion of its 150th anniversary.

The board members at that time complained that Tkáč did not even consult the board when deciding on the laureates of the award, among whom were also Supreme Court President Štefan Harabin and former prime minister Vladimír Mečiar.

The critics also pointed to Tkáč’s past, as his name appeared in the documents of the ŠtB, the communist-era secret service. In the spring, the committee members opposed to Tkáč proposed a new rule for the elections to prevent ŠtB collaborators from running in the election. Matica’s general assembly however did not pass the new rule in a public vote.

Matica Slovenská currently has about 12,000 members. It was founded in 1863, in the time of the Slovak national awakening, as an institution that was expected to protect and spread Slovak culture in the country which at that time was ruled from Budapest.

The emergence of Slovakia as an independent state has however posed some challenges for the institution, with some observers questioning its very existence or saying that its mission needs to be redefined.

Currently, Matica sees its mission in “developing and fostering Slovak patriotism, awakening and strengthening the national awareness of Slovaks and compatriots living abroad, deepening the relationship of the citizens to the Slovak statehood”, its website reads. It goes on to list activities through which Matica aspires to fulfil its mission, among them establishing funds to support the national culture, and encouraging youth to be active in the country’s cultural life.

Slovak media however often point to elements within Matica that defend nationalism, especially when interpreting the history of Slovaks from a nationalist perspective.

Also, Matica, as an institution, has a reputation for attracting far-right extremists. For instance, in 2010 Matica dissolved its local organisation in the central-Slovak town of Púchov after its local head Marián Mišún turned out to be active in the far-right party People’s Party – Our Slovakia, headed by infamous extremist Marian Kotleba. The media at that time reported that Kotleba himself became a member of Matica’s Púchov branch in August 2010.

Nevertheless, Matica Slovenská enjoys the support of the current government, particularly the prime minister, who voiced strong support for Matica in his speech at a conference organised by the institution at the occasion of its 150th anniversary in February 2013, saying that Matica “raised our nation from the dead”. In his speech, PM Robert Fico objected to media criticism of Matica.

On that occasion, however, Fico also voiced some ideas about minorities living in the country that were quickly condemned by local and international minority rights advocates.

“We did not establish our independent state in the first place for minorities, although we do respect them, but mainly for the Slovak state-forming nation,” said Fico, adding that he has detected what he called a “strange tendency to put forward the problems of minorities” to the disadvantage of the Slovak nation “as though Slovak men and women do not live in Slovakia at all”. Fico also said some minorities have been trying to blackmail the state through the issue of minority rights.

Fico later claimed his statements were misinterpreted and taken out of context.

Matica’s head Tkáč however has more than the ideological issues to worry about, as Matica is reportedly also involved in some murky financial transactions.

Tkáč recently filed a criminal complaint against an unknown offender in a case that involves Matica investing money from the so-called Slovak National Treasure with Podielové družstvo Slovenské investície, a non-banking financial institution which went bankrupt and cost the group some €1 million.

The National Treasure was created in 1993 by contributions from firms and people and is dedicated to supporting Slovak culture. Matica Slovenská Foundation administers the treasure, which was valued at some €863,000, not counting art and precious metals, Tkáč told the Hospodárske Noviny economic daily in 2012.

“I am doing everything to wipe the shame caused by the previous management by wasting [money from] the National Treasure,” Tkáč told Sme earlier, “which is the main reason why they want to push me away.”