WITH the onset of economic crisis, popular myths about the burden unemployed Roma families place on the public budget took on epic proportions. Many such rumours suggest that Roma abuse the social benefits system by having many children, refusing to work, and boosting their incomes from state contributions – while making more money than many who are actually working. Statistical data and experts suggest these observations are not only discriminatory, but factually wrong. 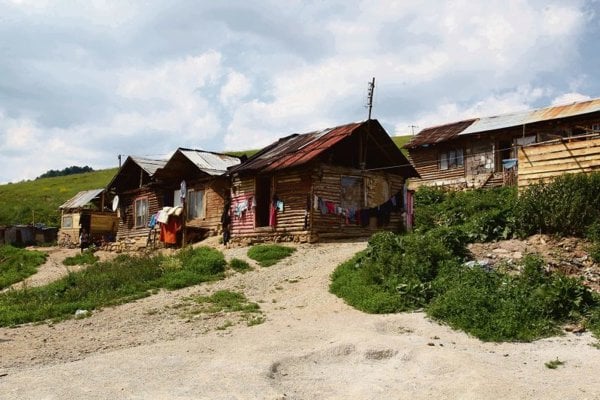 “Social benefits and their receivers are depicted as a burden for public finances and parasites on wounds for [hard-working] tax payers,” Zuzana Kusá, a sociologist with the Slovak Academy of Sciences, told The Slovak Spectator. “People receiving benefits [are depicted] as unwilling to work and adapt to our norms and in general misusing our good-will and kindness.”

Even the most basic examinations of the purported scam by which Roma abuse the welfare system indicate their absurdity. Miroslav Dama is a 30-year-old Roma man living with his wife and three children in Rankovce, eastern Slovakia. Since he participates in work programmes as a labourer and receives child allowance, his household’s income is around €317 per month, Dama told The Slovak Spectator.

“You cannot live on child allowances alone,” he said. “We will receive it just for the next three years and I do not know how my five-member family will survive then.”

There are three main types of protection-oriented social assistance programmes in Slovakia: the Benefit in Material Need programme (BMN) or welfare, family allowances which are tied to children, and disability benefits, which are paid to those who were injured on the job. The state spent around €268.7 million on the BMN welfare programme and €709.2 million on family allowances in 2012, according to the Ministry of Labour, Social Affairs and Family. In total the state’s expenditures on social assistance, €1.37 billion, are a small percent the full budget, spending €15.64 billion in 2012, according to draft of state’s final account.

Breaking down the numbers

Roma do account for a disproportionate amount of social benefits, if only because they are much poorer than other groups. Accounting for an estimated 7.45 percent of the population, they make up about 35 percent of the households on welfare. The average Roma household lives on about €528 per month, compared with €773 for non-Roma neighbours, according to the World Bank. The vast majority of Roma in Slovakia, 87 percent of households, live below the poverty line, according to a joint study by the World Bank, United Nations Development Programme (UNDP) and the European Commission. One-third of Roma children go to bed hungry at least once a month because there is not enough food.

These statistics alone would seemingly be enough to bust any myths about Roma living large on state benefits while low-wage workers suffer. Combined with the low percentage of the total budget spent on such programmes and the idea becomes particularly absurd.

“Roma are objectively poor, face a high unemployment rate and they simply largely receive state social assistance. What else would they live on instead of social assistance?” Laco Oravec, a programme director of the non-governmental Milan Šimečka Foundation, told The Slovak Spectator. “On the other hand, those numbers and facts are not interpreted in the context of the whole Slovak budget. People in Slovakia do not know that we spend just a dash of the total state’s expenditures on social assistance.”

As compared with the €528 per month the Roma minority household lives on, the overall national average of a married couple where both are employed and receiving the median salary with two children aged 10 and 11, has an income of €1,196.39. The sum consists of the parents’ wages, with the father earning €602.79 and the mother €504.58, a tax bonus of €42.82 and children contributions totalling €46.20, according to a Labour Ministry model.

Altogether, an estimated total of 165,000 Slovak Roma of working age are without work. Most Roma without jobs are long-term unemployed or inactive, meaning they have stopped looking for work. In total, there are about 12,000 short-term unemployed Roma and about 53,000 long-term registered unemployed Roma in Slovakia, which means they have been unable to find work for more than 2.5 years, according to the World Bank.

The net monthly wage for a male from the majority with a job is €729, compared with €403 for Roma men. Roma women earn €278 per month with other working women averaging €566. This means that employed Roma men earn salaries that are only 55 percent of the salaries earned by the general male population, while the corresponding figure for women is 49 percent, based on the World Bank report.

Even when Roma want to find work, they have trouble. An estimated 64 percent of Roma men and 78 percent of Roma women who are looking for work are unable to find it, according to the World Bank. Erik Gunár, a 20-year-old Roma student of the University of Prešov, in Prešov, said the income of his family consisting just of him and his parents is around €550. The income is comprised of €280 in the form of welfare and €270 as part of Gunár’s scholarship.

Gunár sought a job as an administrative worker with a pharmaceutical company but during the first phone call he was asked: “Are you Roma or you are not?” After he confirmed his Roma ethnicity the person on the other side of phone started to list reasons why her firm cannot hire him.

“I turned the phone off immediately and did not want to talk with her anymore,” Gunár said.
The increased marginalisation of ethnic minorities during times of economic crisis is common, according to Michal Stuška, a spokeperson for the Labour Ministry.

“For a longer period of time, we are witnessing postings which, in a misleading way, depict the amount of contributions received by Roma families,” Stuška said, “[The myth] spreads via e-mail, well-known social networks or even by tabloid media, and tries to look like trustworthy proof of Roma parasitism.”

One popular online myth comparing the income of a Roma family with the family of a hard-working nurse appears on the fan page for Marian Kotleba, leader of the far-right People’s Party – Our Slovakia, according to People Against Racism, the human rights watchdog webpage.

There are a number of misleading models on how Roma families might abuse state aid, and none hold up to scrutiny. Kusá points out that welfare payments are broken down into separate categories and that recipients must meet a variety of criteria to receive all such payments. In short, not all families meet the criteria for full payments in all categories – though these mythical models almost all assume that they do.

Another false assumption in such conspiracy theories assumes that Roma families receive benefits to finance housing. However, state contributions for housing are only available to people with a legal connection to their houses, while one-third of Roma live in homes that are considered illegal, according to the Atlas of Roma Communities 2004. These families do not receive housing benefits, Kusá said.

Moreover, many myths assume that both Roma parents take part in the activation works system, which connects extra benefits with work programmes. However, activation works are offered to a small number of people and it is very unlikely that both in a married couple will have the opportunity to join this system, Oravec said. Just one in four unemployed people has a chance to get an activation contribution, according to Kusá.

In the end, the statistics point to a Roma community that is much poorer than the rest of society and as such receives more state aid, but nowhere near enough to make them wealthier than most working people. All of this occurs in an environment where welfare benefits comprise just a small portion of the overall state budget. These myths likely persist because nobody stands up to point out they are false.

“In a political debate, there is a lack of voice defending people’s right for unconditional social protection and benefits – a guaranteed minimal income as a state’s obligation towards its citizens,” Kusá said.

While estimates vary, the Atlas of Roma Communities, published in September 2013 by the UNDP Bratislava regional centre, estimated that 402,840 of Slovakia’s 5.4 million people were Roma, about 7.45 percent of the population. Some 187,285 Roma live integrated with other groups while 95,971 Roma live in concentrations on the edge of municipalities and another 68,540 in segregated communities well outside municipalities. The numbers are comprised of people who were identified by neighbours as Roma. There are no official government statistics as the law prohibits gathering ethnic data.

There are three main types of protection-oriented social assistance programmes in Slovakia: the Benefit in Material Need programme (BMN), Family Allowances, and Disability Benefits. BMN is available for households with income lower than the subsistence level, which is €198.09 per month for a single person since July 2013, according to the Labour Ministry. The number is proportional to the amount of household members. Contrary to BMN, family allowances are a universally available form of support usually given without factoring the economic situation of the household.

Roma families constitute about 35 percent of all households receiving BMN, according to the World Bank’s Policy Advice on the Integration of Roma in the Slovak Republic, published in July 2012.