A POWERFUL sound of melancholic violin is echoing within the massive walls and the high vault of a synagogue, offering a breathtaking combination of music and history. Once a common occurrence in Slovakia, such experiences are increasingly rare. 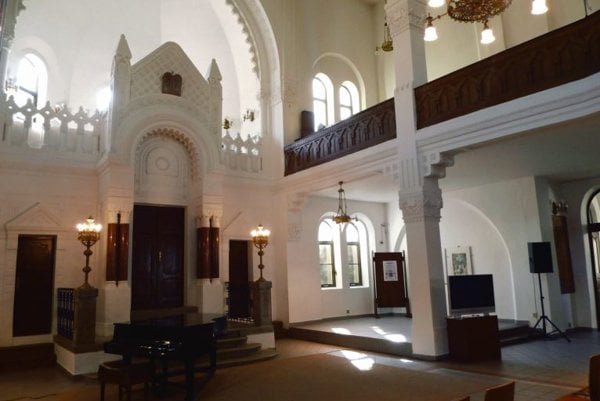 A POWERFUL sound of melancholic violin is echoing within the massive walls and the high vault of a synagogue, offering a breathtaking combination of music and history. Once a common occurrence in Slovakia, such experiences are increasingly rare.

There were around 100 identified synagogues in Slovakia before World War II. Most of those remaining are in very bad condition today. Just seven still serve their original purpose and 10 more have been renovated for use in cultural events.

“There are also cases that the renovated synagogues are used as stores or fitness centers,” said Katarína Potoková, a member of Nitra’s Jewish Community. “It presents an ethical dilemma, whether or not such uses are defilement.”

The wartime Nazi-collaborationist Slovak state deported around 71,000 Jews, with just a few hundred returning after the war. The state not only allowed deportation of its own Jews, but also paid 50 reichsmarks per person. Still more Jewish heritage was lost when more synagogues were destroyed during the communist totalitarian regime.

Viera Kamenická from the Museum of Jewish Culture was delegated to take some pictures Bratislava’s Neologic Synagogue during its demolition.

“It was a terrible scene,” she said. “I saw people crying and saving the pieces of the building, brickwork, tiles, everything that was valuable to them.”

There were around 135,000 Jews in Slovakia before the war. Today there are an estimated 1,600 Jews living in 12 Jewish communities around Slovakia, and another 4,000 who claim the religion on census forms.

“There is no objective information of the number of Jews living in Slovakia today,” Kamenická said. “For example, there were around 400 registered Jews in Bratislava a few years ago and now there are around 1,200 Jews. This is because a lot of Jews didn’t register for various reasons after the war.”
When Jews came back from concentration camps, they didn’t feel safe in Slovakia.

“The Holocaust was also a matter for Slovaks,” Kamenická said. “It was not German, but Slovak guardsmen in the work camp of the Slovak town Sereď. When Jews arrived home and they realised that their neighbour is the guardsman that terrorised people in the camp, they were afraid.”

Many of the Slovak Jews who survived migrated to the United States, the UK, Switzerland or Israel.
“Slovakia wasn’t home for them anymore, because home is where you are accepted,” Kamenická said.

The resulting low number of Jews living in the country, meant that synagogues remained abandoned.
“There was nobody to care for them, to pray there,” said Potoková.

But even among these difficult conditions, some have managed to endure. Bratislava’s only remaining synagogue on Heydukova Street still serves its original purpose, hosting both Jewish marriages and prayers during Jewish festivals. All told there are still seven active Slovak synagogues, two in eastern Slovakia in Košice, three in the south in Nové Zámky, Komárno and Bratislava, and two in the north in Bardejov and Prešov.

“In Nitra there was once a huge community and today it is a problem for 10 adult men to meet up for a valid worship,” Kamenická said.

The rest of Slovakia’s synagogues fall into two categories: dilapidated or used for other purposes. In Trstená, the old synagoge is a shopping centre. Komárno’s synagogue is a squash centre, Zlaté Moravce’s houses a climbing wall, Tvrdošín’s a bar, and in Revúca the building has been converted into a Jehovah’s Witnesses chapel.

“Synagogues should be used for cultural purposes but when there’s no opportunity to use them this way, it’s better to use them for commercial purposes than to let them become abandoned or fall into decay,” said Pavel Frankl, the head of the Jewish community in Žilina. “If there’s no tabernacle with a Torah in the synagogue, it’s not a sacred place anymore.

“The still sacred places for us are old Jewish cemeteries where our ancestors are buried,” he continued. “Even when the gravestones are demolished, it is most important that there are still their bones in the soil.”

Other renovated synagogues are mostly used as museums or art galleries today, such as the synagogue in Nitra. The year 2013 will see the 10th anniversary of the renovation of Nitra’s synagogue, which was completed in four stages.

“I still remember that when I was a girl the synagogue looked like an enchanted castle,” said Veronika Beláňová, a guide in Nitra’s synagogue.

The Neologic Synagogues in Košice, Levice and Liptovský Mikuláš have undergone similar rebirths. In a renovated small synagogue in Trnava is an exhibition of the photographer Jan Saudek. Others serve as Jewish heritage museums or as Holocaust memorials.

Beauty or the beast

Once one of the country’s most beautiful and biggest synagogues, the building in Lučenec is in poor condition today. The synagogue was not the property of a Jewish community, but owned by private firms. The last owner went bankrupt, and lacked the funds to launch a renovation. As of May, it is back in the hands of the town.

“Because it wasn’t possible to pay the renovation from the town’s budget, we were looking for other ways to save this monument,” said Mária Bérešová, spokesperson for Lučenec City Hall. “The town is trying to get finances from the European Union.”

A plan calls for the renovated synagogue to become a multicultural centre, hosting concerts, festivals, exhibitions and balls.

“The synagogue should worthily serve not only for the citizens of Lučenec, but also for foreigners as an attractive place for tourists,” Bérešová said.

Another renovation project is underway in Žilina, under the guidance of the non-governmental organisation Truc Sphérique, which seeks to make a kunsthalle (hall of art). The Jewish community has signed a contract with Truc Sphérique for a 30-year lease at a symbolic €1 per year.

“We are planning to open the synagogue to the visitors starting next year,” said Marek Adamov, the leader of Truc Sphérique. “There will be one small office where visitors can stay, learn something about the building or the renovation, even buy souvenirs there. It will also be possible to walk inside the synagogue.”

While Slovakia’s Jewish community is unlikely to ever return to its early 20th century numbers, its role in the country’s history can remain.

“We must think about what we will leave here for the future generations,” Beláňová said. “We should renovate old buildings instead of building new ones. The cultural value of many cities would be preserved.”