WHILE THE first edition of World of Drums in 2011 proved to be more of a special occasion for insiders, the second edition, in October 2013, presented several top-class international musicians and transformed the Ružinov House of Culture into an exotic place, reverberating with earthy rhythms and attracting audiences of all ages and interest groups. 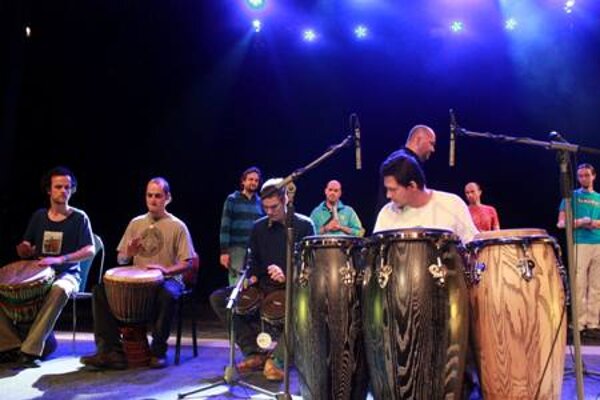 WHILE THE first edition of World of Drums in 2011 proved to be more of a special occasion for insiders, the second edition, in October 2013, presented several top-class international musicians and transformed the Ružinov House of Culture into an exotic place, reverberating with earthy rhythms and attracting audiences of all ages and interest groups.

The festival, on October 11 and 12, offered prominent percussionists on both days, as well as a special jazz performance by Ľudmila Štefániková and Matúš Jakabčic on the previous day, and numerous accompanying events.

On Friday, visitors could watch hearing-impaired children play in the Tortola Drums project, as well as the Gong Keybar Indonesian Gamelan orchestra, combining Indonesian and Slovak musicians with traditional Indonesian dancers from Budapest. Next, the Djakali Kone band from Burkina Faso (currently from Austria) energised its audience, leaving the Polish Amadrums Trio, who experimented with contemporary classical music through improvised instruments, with the difficult task of following them.

Friday evening’s highlight was the performance of legendary Egyptian, UK-based percussionist Hossam Ramzy, who in the past has played with a diverse roster of popular musicians, like Peter Gabriel, Jimmy Page and Robert Plant, Franco Battiato, Chick Corea and Jaz Coleman. Charismatic and unpretentious, he played traditional Oriental instruments, like the doumbek and the riqq, and had the audience dancing and clapping to the music.

“I am very hungry musically,” he said in an interview with The Slovak Spectator. “But the fusion itself has to start with knowledge. A friend of mine told me the other day: ‘Just because you are dressed in an Indian sari and dancing mambo, does not make it fusion’. You have to really understand India, and you have to really understand the Caribbean, and then – whatever you merge between them will come out naturally.”

On Saturday, the Rytmika troupe heated things up with a rhythm workshop in the culture house’s main hall. Next, Taiko Hungary enchanted its audience with traditional Japanese drums. Multi-instrumentalist Vladiswar Nadishana, a southern Siberian native (now living in Germany), presented an assortment of instruments (many made by him) and a special Swiss instrument called a hang.

Pavol Bodnár and his Ecce Jazz band then illustrated the role of drums and percussion in jazz, the timing of which was perhaps not ideal, as the audience was already eager to see the evening’s two main stars: Martin Verdonk and Guem.

Verdonk (born in Curacao, based in the Netherlands) has played with a long list of famous musicians (Carlos Santana, Chaka Khan, Donna Summer, Prince, Steve Winwood) and is known for his popular drum clinics, which Bratislava audiences were able to attend. The packed hall stomped, clapped and danced to the rhythms, and he also chose several people (some professional musicians, some amateurs) to form an improvised percussive ensemble, which he then conducted to play a rather sophisticated tune. In addition to being an excellent musician and improviser, Verdonk is also an outstanding entertainer. After he apologised for “not speaking your language”, an audience member responded, “You do! You speak the language of drums!”

Guem is a different cup of tea, although he also put on a great show and communicated with his audience. His vibrant playing, combined with dance and a witty pantomime, supported by Austrian drummer Peter Gabis, had audience members shouting, clapping and dancing, despite the late hour. Nicknamed ‘the Man with Golden Fingers’, he was born in Algeria and lives in France. He has released more than 30 albums.

The accompanying events, the small makeshift ‘bazaar’ and an Oriental snack stand, as well as brief performances and workshops in the main hall, all helped to create an exciting atmosphere that compelled people to stay longer. Some genres which this year did not make it to the main stage were presented this way, opening the possibility for inclusion in the next festival.

The only real complaint might be that with the overwhelming selection of performances and events, and given that the performers were all so good, with audiences often making standing ovations and begging for encores, both days’ schedules were delayed, ending at midnight on Friday, and well after midnight on Saturday, leaving little time for the after parties.

The host of the festival, Eddy Portella (a drummer and organiser of the Batatimba troupe, which performed at the end of Friday), was probably right when he said that it might be a good idea to divide performers among several stages. He also suggested to organiser Jarka Vlčková to organise the next festival in a year’s time, rather than waiting another two years. The rapturous response from the audiences appeared to prove him right. So, with any luck, perhaps Bratislava can look forward to such an event next autumn.