Fashion outlet is a first for Slovakia 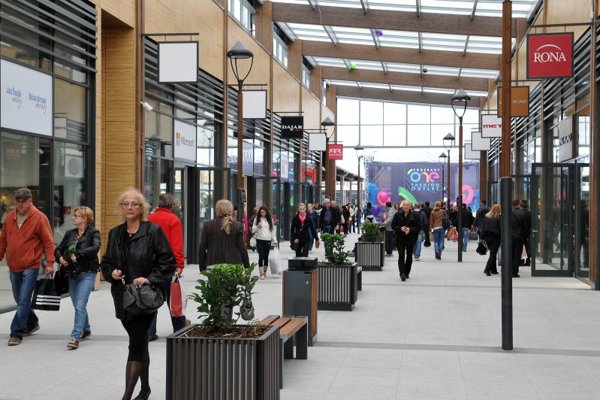 “This is the outlet centre of the fourth generation,” Andrej Brna, the director of the board of directors of Realiz, said at the press conference prior to the opening. He explained that when compared with older outlet centres, Voderady offers a rest zone, including restaurants and cafés, a more sophisticated design and natural construction materials, all of which make it a daytrip destination.

Parndorf, which offers a total of 42,000 square metres of shopping area with over 170 shops, is considered to be Voderady’s biggest competition. The first phase of OFO Voderady offers 15,000 square metres of 70 shops, not all of which managed to be completed in time for the ceremonial opening. The outlet’s developer, Realiz, reports 75 percent occupancy, with 20 percent allotted for name brands, which will arrive only after the centre is completed and open, within six to nine months. Name brands already present include Nike, Adidas, Benetton, Levi’s, Ecco, Mustang and others.

The developer plans to continue building the centre in two more phases. Once completed, it should offer 35,500 square metres of rentable space, 130 shops and parking for 2,500 cars. Total investments are projected at €65 million, €30 million of which went into the first phase.

“When the interest of brands will be as it is now, when we fill 50 percent of the area, then we will start the construction of the second phase,” said Brna.

OFO Voderady is located seven kilometres from Trnava, only one kilometre from the D1 cross-country highway. According to Vladimír Kozár, project director of OFO Voderady, their target group consists anyone aged 15-16 and up who is willing to spend money on fashion and name brand clothes.

“We primarily built the outlet centre for Slovaks, which means a catching area of almost three million Slovaks within a two-hour drive time,” said Kozár, adding that this includes inhabitants of Žilina and Banská Bystrica. He considers Košice inhabitants to be potential shoppers as well, since they are already willing to travel to Parndorf. Since the highway near the centre is used as a transit route by Czechs and Poles, he would like to see them shopping in Voderady, too. He would also like to attract Arab and Russian clients of the nearby Piešťany spa.

OFO Voderady is not the only outlet project to have been repeatedly announcing its arrival; another one, D1 Outlet City by Ján Čarnogurský Junior’s IPEC, is to be located only several kilometres away from OFO Voderady, near Senec. The latest plan is to open the outlet centre as part of a bigger project called D1 Park next summer, the Trend weekly wrote in late October. It plans to focus on Italian brands.

Lukáš Šarközi, consultant at Colliers International, sees the opening of OFO Voderady as good news for shoppers, as the outlet will increase the number of places where this kind of shopping can be done. But from a strategic viewpoint, he points out that Parndorf is the same distance from Bratislava, and that D1 Outlet City is being planned for Senec.

“From a historical point of view, competing for clients in such a small area has not brought the desired effect to any of the involved parties,” Šarközi told The Slovak Spectator.

Outlets differ from more traditional shopping centres in terms of prices, goods, location, as well as the design and layout. Outlets offer collections from previous seasons and goods designed specifically for outlets at prices reduced by 30-70 percent. As a result, shoppers may have difficulty finding clothes in the size or colour they are looking for. Outlets are also located outside city centres and their building designs are less sophisticated.

The media has reported about Slovaks experiencing sticker shock over prices at outlets, which many expected to be lower.

“An outlet should offer brands for a reduced price, but the problem is that the price is still not as low as in the case of non-branded clothes,” said Pavlína Hajnová from Centers Data, a real estate market analyst, as cited by the Trend weekly. She added that Slovaks are price-sensitive and that Bratislavans, who are better off than the rest of the population, might not be able to find in Voderady their favourite luxury brands that they can already find in Austria.

Ľubomír Drahovský, an analyst with the TERNO market research agency, believes that OFO Voderady may serve as one of the local outlet centres in Slovakia.

“It has an advantageous location close to the highway, and opening before Christmas plays into its cards, too,” Drahovský told the Hospodárske Noviny daily.