PRAGUE – Seven parties passed the threshold for entering the Czech Parliament during the October 25-26 elections, and the instability likely to result is giving pause in Slovakia. 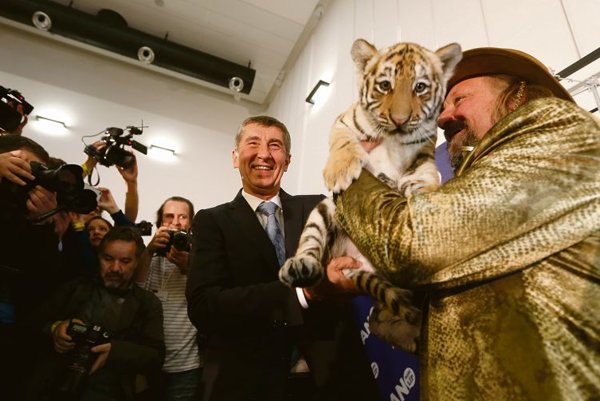 PRAGUE – Seven parties passed the threshold for entering the Czech Parliament during the October 25-26 elections, and the instability likely to result is giving pause in Slovakia.

A strong second-place showing by ANO, a movement led by Slovak-native Andrej Babiš, has thrown an already divided political scene into mass confusion. While the Social Democrats (ČSSD) finished first with 20.45 percent of the vote, this is widely viewed as a disappointing result.

ANO, a political vehicle for Babiš, who is the second richest person in the Czech Republic, followed closely behind with 18.65 percent and the Communists (KSČM) with 14.91 percent. Right-of-centre parties lost votes to ANO as TOP 09 and Civic Democrats (ODS) took 11.99 percent and 7.72 percent respectively. ODS, in particular, suffered a historic collapse. Parliament is rounded out by Úsvit (Dawn), a proto-fascist group, with 6.88 percent and the Christian Democrats (KDU-ČSL) with 6.78 percent.

Voters, angry at years of political corruption scandals, shifted to newly formed parties lacking clear political platforms, including ANO and Úsvit. ČSSD, TOP 09 and ODS all shed votes compared to the previous election. Three parties not part of the last parliament, with KDU-ČSL returning, are now in.

Reactions in Slovakia have been hesitant. Speaking with the TASR newswire, Pavol Frešo, chair of the Slovak Democratic and Christian Union (SDKÚ), noted the emergence of “indecipherable” parties.

“Although no chairman of a stable political party can be happy about the results of the Czech general election, I want to congratulate all the parties that have made it into parliament, and express my hope that they will succeed in creating a stable government,” he said.

Already unstable results have become even more tenuous in the days since the vote, as internal divisions within ČSSD have burst into public view. A temporary truce between two factions, one allied with President Miloš Zeman and the other opposed, means that coalition negotiations will begin. ČSSD Chairman Bohuslav Sobotka has called for a meeting of the party’s executive committee for November 10.

“It is important that ČSSD won,” Slovak Prime Minister Robert Fico told the Sme daily. “Now they have to try to form the government, but I do not envy Sobotka’s position.”

ANO remains the biggest story emerging from the election. Anger at the political establishment, a hefty marketing budget provided by the billionaire Babiš and an ambiguous anti-corruption message drew supporters.

“Through the clear definition of the rules we will be able to deal with corruption,” Babiš said during a pre-election interview. “Our main goal is to guarantee that our children will want to live here.”

Even allegations that Babiš had worked for the communist-era Czechoslovak secret police (ŠtB) did not deter voters, after a pair of archived documents seemed to indicate he did. The Bratislava-based Nation’s Memory Institute, which keeps old ŠtB files, had a file that alleged Babiš first collaborated with and then was an agent for the ŠtB under the codename “Bureš”. Babiš denied the allegations and took the Institute to court. Just days later, however, Sme found a separate file that appeared to corroborate the first.

“I worked in foreign commerce, and during socialism, people who went abroad to do business were stalked by the ŠtB,” he said when asked for an explanation of the file.

Born in Bratislava, Babiš still speaks Czech with a thick Slovak accent. His father was a Czechoslovak diplomat, and Babiš was able to travel to the west, even attending secondary school in Switzerland. In 1974 Babiš graduated from what is today Bratislava’s University of Economics.

Babiš worked for communist-era Czechoslovakia’s state owned foreign trade company Petrimex and was a member of the Communist Party. After the Velvet Revolution he became president of Petrimex and eventually gained control of Agrofert, one of its divisions. Through Agrofert, now a massive agricultural, chemical and food processing operation, he gained his personal wealth. Sceptics draw connections between his alleged ŠtB ties and his rapid success in the post-communist private sector.

“It doesn’t matter if [Babiš] is an angel or a devil, what is worrying is that his party is completely unpredictable,” Jiří Pehe, director of New York University in Prague and a former aide to Václav Havel, said in an interview. “It’s a recipe for disaster.”

Babiš and ANO had hoped to stay in the opposition following the election, but their sudden success means that people are looking for them to become part of the next government. Indeed the only likely coalition that can come from the election results would involve ANO, ČSSD and KDU-ČSL.
“Most of the scenarios are rather gloomy,” Pehe said.