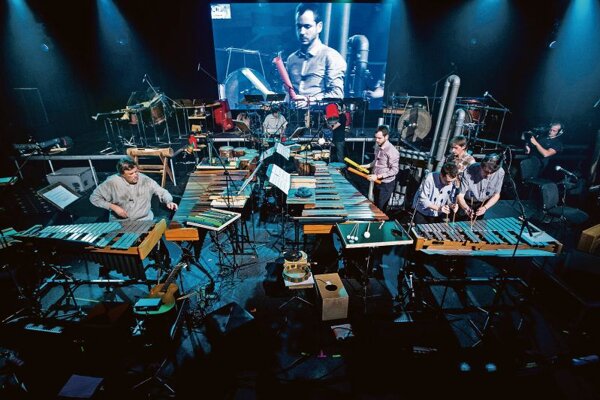 But an intriguing phenomenon was the increasing presence of collaboration between Slovak and foreign (mostly US) musicians. Nikolaj Nikitin (with his Quintet) had already formed a long-term collaboration with Michael “Patches” Stewart, a US trumpeter with whom he also recently recorded the album Music for Boys and Girls Vol. 1, which saw a release launch at the festival.

The Chicago Blues Connection, an intriguing quintet of musicians from the US (Yaahn Hunter Jr on Hammond organ and Terrence Williams on drums) and Slovakia (Roman Mečiar on guitar, Michal Šimko on bass and the initiator, Mário ‘Gapa’ Garbera on saxophone), explored the roots of ‘classic jazz’. The group has been touring Slovakia and a gig in Prešov has been recorded for a live album.

Štefan “Pišta” Bartuš & Jazzbrothers also featured a US musician, saxophonist Andy Middleton (who previously toured together in 2011), as well as Italian pianist Antonio Farao and Vladimir Kostadinovic from Serbia on drums.

Friday’s programme began with a performance by Martin Uherek Quartet, last year’s winner of the Stage of Young Talents competition of the SPP Foundation. They played the melodies of American jazz pianist and composer Thelonious Monk.

Zawinul Legacy Band, consisting of musicians who played with the late jazz composer and musician Joe Zawinul, originally from Austria, played their own energetic compositions, often fused with tribal melodies and instruments.

The tempo did not slacken even with Friday’s next performer, José James, a US jazz singer whose music blends several genres, including hip-hop, soul and drum and bass. The evening concluded with the saxophone mastery of Joshua Redman and his quartet.

Saturday’s line-up featured a combination of more traditional jazz, with Nikolaj Nikitin Quintet, Chicago Blues Connection and The Super Trio HBC, the latter featuring Scott Henderson, Jeff Berlin and Dennis Chambers, and music that pushed at the limits of the genre, like the rocking Guillaume Perret & The Electric Epic from France, or R&B singer Bilal.

Bilal’s mellower, more intimate performance following the wild set of the French act was not well-timed and the overall feeling was that his music, however interesting, would be more appropriate in a smaller venue. The same could be said of Slovak band Hangsome (named after the hang drum, which one of its members plays), Saturday’s entry for the Stage of Young Talents. The Acoustic Travellers from Austria then took the audience on a journey through world music and jazz.

On Sunday, Hungarian percussionists Amadinda opened the evening after three hours of preparation and stage rehearsals, as they brought “a truck-full of various drums, percussions and percussive instruments”, organisers told The Slovak Spectator. Amadinda normally plays at world-music festivals, but also “at places like the Royal Albert Hall, Carnegie Hall or Chiang Kai-shek National Hall in Taipei”.

“Amadinda is a contemporary music group,” Zoltán Rácz told The Slovak Spectator. “We play mostly the original repertoire of the 20th century for percussionists,” he continued, adding “we [also] compose our own music, play from transcriptions of older music, and - which is very important - we play quite a huge amount of traditional music.” Rácz stressed that traditional music is one of the most important aspects of their work because it “is simply the mother tongue of percussion music. A contemporary percussion player has to connect to the mother tongue.” The band, which started in the 1980s, draws inspiration from indigenous music from all corners of the world: “Europe is not very rich in this aspect, but we found this beautiful Basque music,” he said.

Rácz added that it was difficult in communist-era Hungary for the band to find sources for this type of music: “It took a lot of research”. In addition to traditional music, Amadinda (consisting of Rácz, Károly Bojtos, Aurél Holló and Zoltán Vaczi) also performs adapted works of Debussy, Ravel, but also of John Cage (composed for them) and contemporary Hungarian composers. “In mid November we release a new piece composed by Hungarian composer Levente Gyöngyösi for four percussionists and an orchestra,” Rácz concluded.

The most hotly anticipated artist by hardcore jazz fans on Sunday was US tenor-saxophonist Chris Potter, who arrived in Bratislava with his Underground Band. Potter was deemed the best contemporary tenor-sax player by DownBeat Magazine and the Association of Jazz Journalists. He spoke little during his set, and mostly just played and played, resulting in a standing ovation from the audience.

“I remember I have already played at this festival, with Dave Holland Concept, on the day when Barack Obama was elected president for the first time,” he told The Slovak Spectator. “As a musician playing jazz I was fortunate that there are people all over the world who are interested in hearing it, and that’s what we do. We play at festivals, in small clubs, we do all different size venues. And that’s actually nice. And I like to play a bit different things every time. We are also working on a new recording for December, and so we [will today] play some of the older music and some new things that have not been recorded yet.”

Asked what drives him to keep working and touring the world after all that he has achieved, Potter answered, “What makes me get up and rehearse and play is nothing as simple as awards or playing with certain people; it is much more that you can never learn everything about music, especially with jazz music, because so much of it is improvised, so every time you go up there and play, you have to decide what to play - sort of compose while you are standing there. And this is a challenge - mentally, physically, musically - knowing enough about music and harmony because of choosing notes, but most importantly, psychologically and emotionally. What can I play that is going to bring me and the band and the audience into a positive emotional state? It is pretty abstract, but that’s what music is really for,” he concluded.

For the final Sunday performance, the festival’s organisers tend to book bands with a broader appeal, and this year it was UK group the Brand New Heavies, who played acid jazz-funk, turning the auditorium into a disco. Three founding members, Jan Kincaid, Simon Bartholomew and Andre Levy invited singer Dawn Joseph to perform their older hits as well as pieces from their new record.
Perhaps Bratislava Jazz Days may change its name in the future, as it has already expanded to Žilina and Prešov.

The competition of young talents was ultimately won by Banská Bystrica-based Maringotka with their brand of “gypsy jazz”. They will have the honour of opening the 40th year of Bratislava Jazz Days in 2014.