MAKE small holes with a sharp knife to a round piece of steak or beef and fill them with salty pieces of garlic, smoked bacon and five pieces of clove, Jakša Muljačić said while passionately explaining the first steps for making Pašticada, a traditional Croatian dish. The Croatian ambassador to Slovakia placed the meat in a bowl and poured red wine, vinegar and Prošek, a sweet dessert wine from southern Dalmatia, saying that the meat needs to rest in this marinade overnight.

Related: Croatian cuisine I Main dish I Other cuisines 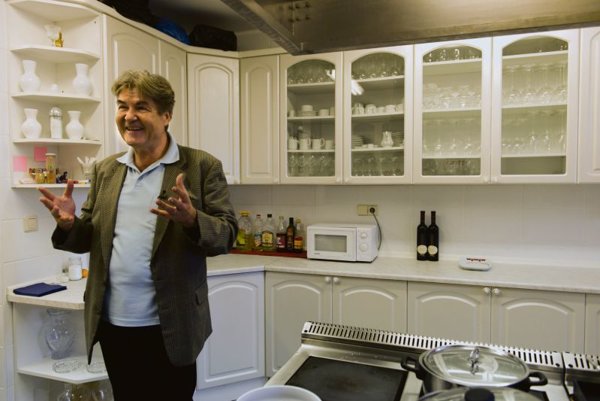 “I learned it from my mother; she learned it from her mother and her grandmother,” Muljačić said, adding that the recipe, which comes from Renaissance times, requires a lot of preparation, but the result is what he called a complete harmony of different flavours.

To achieve this harmony the ambassador chopped carrots, parsnips and apples, to be added to the dish, along with dried plums, nutmeg and various spices.

According to Muljačić, meat, especially pork, but also chicken, duck and goose, is very popular in Croatia, which is one of the many similarities that he has detected between Slovak and Croatian cuisine.

“There are many similarities, especially if we talk about the northern and west-northern parts of Croatia, which for centuries were part of the Austro-Hungarian Empire,” Muljačić said, adding that Croatians, like Slovaks, eat a lot of cabbage.

Thus, Slovak cuisine has not brought any big surprises for the Croatian diplomat, a passionate cook himself, who arrived in Slovakia last October. Muljačić said he likes bryndzové halušky, one of Slovakia’s national dishes, since he likes sheep cheese and bacon, which are especially good in winter time.

As for the cuisine of his homeland,Muljačić explained that over the course of its history, Croatia has absorbed influences from other countries of the region, offering visitors a rather diverse choice of dishes depending on the region they are visiting: in the north-western part there is what he called Austro-Hungarian cuisine; Dalmatia and Istria are influenced by Mediterranean cuisine while a Turkish influence is evident in the central parts of the country.

“Nobody is complaining about Sarma [grape leaves stuffed with minced meat]”, while Pljeskavica [made from a mixture of ground meat] or Cevapcici are not Croatian dishes either, “but we lived in Yugoslavia” and have adopted these dishes, Muljačić said when explaining the regional influences.

Yet, fast food is one of the downsides of globalisation, Muljačić suggested, adding that just like other nations, Croatians are also trying to return to their roots and dine more healthily.

Muljačić however would gladly introduce Slovaks to Kulen, a special kind of spicy pork salami, now protected by the European Union, adding “we also have excellent prosciutto and Paški syr, cheese from the island Pag, where the sheep eat salted grass and thus the milk has a different taste”.

“Especially in Italy they are crazy for this cheese, and they say it is better than parmesan,” Muljačić said.

Since Croatia was part of the Roman Empire and “wherever the boundaries of the Roman Empire reached, there is wine culture”, Muljačić explained that his homeland is not a significant wine exporter since it is a tourist country and much of the wine is consumed by tourists.