A MONUMENT to commemorate Slovak writer, journalist, politician and pastor Martin Rázus was unveiled on the embankment in Bratislava which bears his name, Rázusovo nábrežie, 125 years and 5 days after his birth, on October 24, 2013. 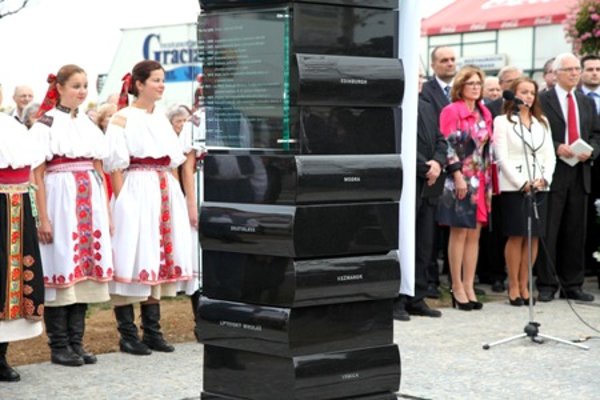 A MONUMENT to commemorate Slovak writer, journalist, politician and pastor Martin Rázus was unveiled on the embankment in Bratislava which bears his name, Rázusovo nábrežie, 125 years and 5 days after his birth, on October 24, 2013.

The monument is dominated by a tall granite pillar consisting of 13 plates, 11 of which represent various places where Rázus lived, studied or worked, including Edinburgh, Scotland, where he studied thanks to a scholarship of the Scottish Church, and also thanks to the support of a big friend to Slovaks and Slovakia, Robert William Seton Watson, the TASR newswire wrote.

On each side of the pillar, glass prisms are attached with a laser-engraved portrait of Rázus, with the quote “I fought with my God, with the world – with myself”, as well as a chronological timeline of his life and a quote from his book of political essays, Arguments. The monument was created by Martin Dzurek and architect Daniel Bartoš, who won a public tender.

The monument’s unveiling was accompanied by a series of events commemorating the 75th anniversary of the death and the 125th anniversary of the birth of Rázus, called Letokruh / Annual Ring of Martin Rázus, which included religious, cultural, educational and sports activities. A concert of the National Youth Choir from Scotland, took place in July in Bratislava, from which proceeds went towards the monument.

Rázus was born in Vrbice, now part of the town Liptovský Mikuláš, and studied theology in Bratislava and Great Britain. He worked as a Protestant chaplain and pastor in Modra, Pribylina, Moravské Lieskové and Brezno. He was active in the Slovak national party (SNS), and even served as one of its chairmen (1929-1937), and was an MP in the Czechoslovak National Assembly in Prague (1929-1937). He wrote anti-World War I poetry and lyrical poems, focusing more on prose after 1918, drawing inspiration from contemporary events and Slovak history. His most popular works, “Maroško” and “Maroško študuje” (Maroško, i.e. his pet name, Studies), are autobiographical. He also wrote a psychological drama, Hana, and a philosophical, dramatic poem, Ahasver. Rázus also wrote a host of political essays, stories and polemics, some of which were published in 1932 in Arguments.

Martin Rázus was a big proponent of Slovak independence, which brought him into the sphere of those pushing for Slovak autonomy, especially as the chair of the SNS. However, Tatiana Rosová, the mayor of Bratislava’s Old Town borough – which supported the erection of the monument – stressed that he was courageous enough to go “against the mainstream”, even in a time when most people were inclined toward an authoritarian regime, and he promoted nationalism without the cheap proclamations and quasi-patriotism, while attributing the feuds among Slovaks only to them, rather than to some foreign conspiracies or outside forces. He became a pastor in Brezno in 1930, where he died on August 8, 1937, aged 48.