CORPORATE taxes might drop if the country’s economy heads in the right direction, Slovak Prime Minister Robert Fico said, shortly after the European Commission (EC) published its autumn prognosis for economic developments in the 28 EU-member states, including Slovakia. Real GDP is projected to increase by 0.9 percent in 2013, “supported by recovering household demand, with net exports driving growth through a strong positive contribution”, said the EC in its prognosis published on November 5. 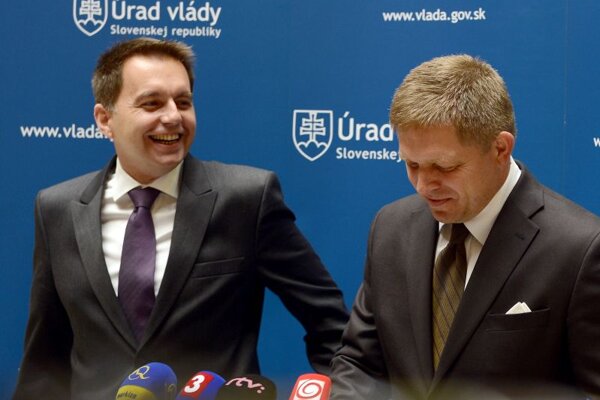 CORPORATE taxes might drop if the country’s economy heads in the right direction, Slovak Prime Minister Robert Fico said, shortly after the European Commission (EC) published its autumn prognosis for economic developments in the 28 EU-member states, including Slovakia. Real GDP is projected to increase by 0.9 percent in 2013, “supported by recovering household demand, with net exports driving growth through a strong positive contribution”, said the EC in its prognosis published on November 5.

While the EC estimate matches the numbers tabled by Slovakia’s central bank, it is slightly more optimistic than the Finance Ministry’s growth forecast, at 0.8 percent.

In 2014 and 2015, the EC expects Slovakia’s economy to walk what it called a “firmer recovery path, with real GDP growing by 2.1 percent and close to 3 percent, respectively” with the Finance Ministry expecting GDP at 2.2 percent.

Fico said he is convinced that these numbers are realistic.

“How much shouting there was at the beginning of the year that these numbers are unrealistic and ridiculous, but when the European Commission is saying it then it is probably all right,” Fico said, as quoted by the TASR newswire when speaking at a press conference on November 5. “Next year we will probably have the third highest economic growth in the eurozone, and still have one of the lowest [levels of] debt.”

While this year the EC estimates the general government deficit to stand at 3 percent of GDP, for 2014 the commission projects the deficit to increase to 3.2 percent “with risks tilted towards a lower deficit outturn”, according to its official release.

Nevertheless, the Slovak government in its draft state budget, which is awaiting parliament’s approval, aspires to trim the public finance deficit in the upcoming years, and for 2014 plans a deficit at 2.83, down from this year’s 2.98 percent. In 2015, the deficit is planned at 2.57 percent, while in 2016 it should be a mere 1.50 percent of the GDP.

If the EC does not change its opinion before spring, Slovakia might be taken off the list of countries with excessive deficit and thus avoid sanctions, the Sme daily wrote on November 7, while quoting Finance Minister Peter Kažimír as saying that “the risk is certainly here but we have a further six months to persuade the commission”.

The EC noted that the draft budget for 2014-16 assumes further improvement in public finances, mainly through additional revenue, which is expected to come from “postponed pay-out of dividends and the extension of the levy on companies operating in a regulated environment, which was supposed to expire in 2013”.

The commission also took notice of the government’s plan to cut the corporate income tax rate from 23 percent to 22 percent, as well as the introduction of tax licenses for trade companies, suggesting that “overall these measures are expected to boost tax revenue”.

While major expenditure savings are planned for health care and reforms in the public sector, the EC however suggests that “information on measures to prevent repeated accumulation of hospitals’ liabilities is not available in detail”.

“There are also implementation risks with regard to the reform of the public sector,” the EC report reads, adding that these measures are not expected to have the full effect on public finances estimated by the government.

Nevertheless, Slovak Interior Minister Robert Kaliňák, in charge of the public administration reform, responded, as quoted by Sme, that “it is a prognosis. A weather forecast. The results are crucial”.

According to the EC, employment in Slovakia will grow at a moderate pace, but it is highly likely that the unemployment rate in 2014 and 2015 will remain above 13 percent.

“Most of the country’s unemployment is long-term, suggesting that unemployment is more of a structural than cyclical nature,” the EC wrote, adding that despite the large pool of jobless workers, “compensation of employees is projected to grow modestly by 2 percent in 2013 and to gather pace in subsequent years”.

Inflation decreased significantly in 2013 and the EC projects it will remain below 2 percent in the next two years “mainly due to decreasing commodity prices and the dampening effect of price regulation in the energy sector on inflation”.