When Bratislava shivered behind the Iron Curtain

For all the massive political progress of the past couple of decades, the city of Bratislava still bears the scars of a turbulent 20th century, when it endured the horrors of two World Wars and then a long period under communist rule. 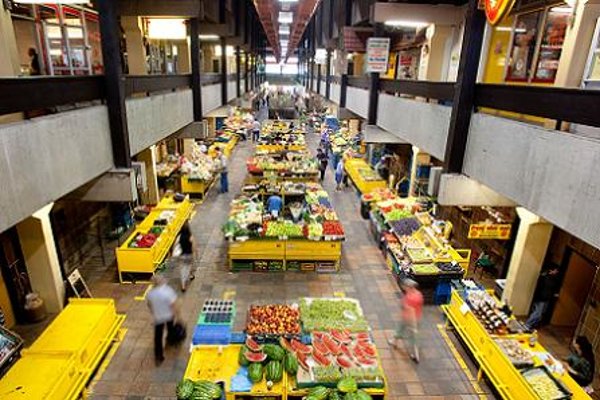 The first modern roofed marketplace ever to open in the city: Tržnica on Trnavské mýto (Source: Gabriel Kuchta)
Font size:A-|A+0

For all the massive political progress of the past couple of decades, the city of Bratislava still bears the scars of a turbulent 20th century, when it endured the horrors of two World Wars and then a long period under communist rule.

In 2013 the city celebrates 20 years since it became the capital of the independent Slovak Republic but it is worth remembering the more difficult times. Several sites across Bratislava offer the chance for visitors to look back on the not-too-distant past, and understand something of the life of Bratislavans from the communist era.

All along the border with Austria are more than 20 bunkers remaining from the Second World War and these days one of them, known as B-S 8 Hřbitov in Petržalka, is a museum containing military uniforms, documents and photographs from the era. But Petržalka itself also stands as a vivid reminder of the communist approach to housing a nation’s population: it is the biggest high-rise housing estate in central Europe, home to more than 150,000 people, packed into in vast “paneláks”, or pre-fabricated concrete blocks of flats.

“Honestly, I have never seen a place before where there are so many similar buildings in such a huge space,” the British architect Jonathan Falkingham told the Sme daily.

Attempts to link Petržalka to the rest of Bratislava via a subway system were abandoned in 1989, leaving today a large, dark hole where the last stop was intended to be. It is located near the final stop of buses 93 and 95.

Another enormous souvenir socialism left in Bratislava is Slavín, the vast monument to soldiers of the Soviet army who died in the battle to liberate the city at the end of the Second World War. The monument sits atop a hill just outside the city and offers one of the best views over Bratislava. But its construction came at a cost.

Slavín is only 500 metres away from the Church of Our Lady of the Snows on Calvary mount, and the communists destroyed the church’s tower in 1960 as they felt it threatened the dominance of their new memorial.

Slavín and the tower-less church are stopping points on a unique tour offered in Bratislava by a man named Branislav Chrenka, who ferries tourists around the various communist-era landmarks in a vintage Škoda car. Other interesting destinations include the famous upside-down pyramid building of the Slovak public service radio on 1 Mýtna Street, the work of the architect Štefan Svetko. He also designed the modernist Hotel Bôrik, which was built in 1974 as luxurious accommodation for visiting diplomats.

Further along Mýtna Street is what is now officially known as Námestie slobody (Freedom Square). Locals may, however, refer to it as “Gottko” recalling its name under the previous regime: Gottwaldovo, after Klement Gottwald, the fifth president of Czechoslovakia. The statue of Gottwald is long gone, leaving the biggest fountain in Bratislava, but which has been out of order since 2007, to dominate the square.

Evidence of the communist regime’s presence in Bratislava can also be less obvious. At 12 Špitálska Street, near the Old Town and Kamenné námestie (square), for example, visitors will notice two majestic lions either side of an impressive entrance. This was one of the first homes of the ŠtB state security service, before the organisation moved to its better-known headquarters Februárka, at 45 Račianska Street (now a police HQ). According to František Neupauer, who is behind an initiative to open a Museum of Crimes and Victims of Communism in Bratislava, many opponents of the previous regime were interrogated in this building.

The socialist atmosphere is still very much present in the marketplace on Miletičova, which is the biggest in Bratislava, and at the first modern roofed market place ever to open in the city: Tržnica on Trnavské mýto.

The construction of SNP Bridge in the 1960-70s had a major impact on the city. A significant part of the historical centre was destroyed during the construction including almost all of the Jewish quarter. Today, what was once a bomb shelter near the bridge houses Subclub nightclub.

It is also possible to recall the previous era at Cvernovka, at Páričkova/Košická Streets, behind the main bus station. This is a former spinning mill, which opened in 1908, and during the 1960s employed 2,500 mostly female workers. These days it houses a number of studios and offices for artists and architects and on May 1 every year hosts a “Day of Open Workshops” festival.

“After we graduated, we needed a space where we could work and create, so we met here without state support and started our own business here,” said Šymon Kliman, a photographer who has his studio in the complex.

A part of the mill on Košická Street has already been renovated, and includes a café (www.cafecverna.sk) and a number of shops selling furniture, clothes, etc. Further plans for reconstruction are currently being thrashed out with the French developer who owns the premises.

Arguably the part of Bratislava in which the communist presence was most keenly felt was Devín, only a stone’s throw across the Morava river into Austria - tantalisingly close to freedom. The area beneath the castle was among the narrowest stretches of the Iron Curtain, the largely impenetrable border between the Soviet nations and the West. It meant that the region became a popular spot for would-be deserters to attempt their escapes.

According to Ľubomír Morbacher, of the Nation’s Memory Institute, more than 100,000 people fled the Eastern Bloc. Some of these people seeking freedom fled through Devín. The number includes departures during times “when leaving the country was still possible”, then “when it was very difficult to depart” as well as the emigration wave in 1968-69, Morbacher said.

It also meant the Devín area was under permanent guard with residents living side-by-side with troops.

Of course, not every escape attempt was successful and a poignant monument, riddled with symbolic bullet holes, sits at the foot of the castle and remembers those killed during their bids for freedom.