Government says no to Pered

THE INTERIOR Ministry received an unusual parcel in early November. 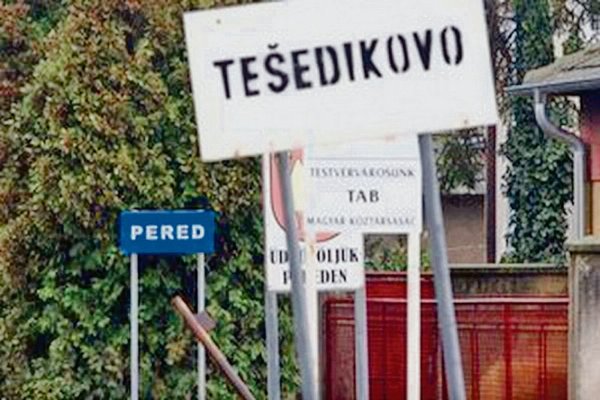 THE INTERIOR Ministry received an unusual parcel in early November.

Activists promoting bilingualism in southern Slovakia sent the interior minister a neatly wrapped signboard for Tešedíkovo, a village whose inhabitants would like to rename Pered, its original historical Hungarian name. The government, which was a decisive voice in the naming of municipalities, denied their request.

In an effort to change their village’s name back to Pered, Tešedíkovo’s inhabitants followed the example of several other municipalities which were forcefully renamed under the communist regime.

The village held a referendum over the matter in March 2012, which took place at the same time as the parliamentary elections that saw the current government of Robert Fico’s Smer party return to power. The referendum was successful, with over 64 percent of all eligible voters casting their vote, two thirds of whom were in favour of changing the name to Pered.

However, in order for a municipality to change its name, it must have the government’s consent, which is where the situation became complicated. The government dismissed the proposal on October 16, 2013, one and a half years after the referendum took place, based on the recommendation of the terminological commission of the Interior Ministry, which opined that the change would violate the law on municipal establishment and state language.

The members of the commission argued that the name Pered sounded too Hungarian, the Sme daily reported.

Interior Minister Robert Kaliňák dismissed accusations that the government was ignoring the valid results of a plebiscite, and stressed that the names of municipalities must be in Slovak, the official state language.

“Pered is an original Hungarian name, which wouldn’t be appropriate to return to, just like Bratislava won’t return to the name Pozsony,” Kaliňák said, as quoted by the Sme daily.

History of the name

With a population of 3,700, Tešedíkovo, in south-west Slovakia, is one of the biggest villages in the country. The majority of the village’s inhabitants, 83 percent, are ethnic Hungarian according to the 2001 census.

Pered is currently listed as the municipality’s Hungarian name, in accordance with a law that requires towns with an ethnic minority of at least 20 percent of the total population to post bilingual signs.

The first written record of the name Pered comes from 1237, and it remained in use until 1948 when communist politicians changed it, along with the names of over 700 other municipalities. Interestingly enough, villages in southern Slovakia inhabited by a majority of ethnic Hungarians were often named after Slovak personalities from the 19th-century national awakening, such as Štúrovo, Hurbanovo, Sládkovičovo and Jesenské.

Pered was thus renamed Tešedíkovo, in honour of Samuel Tešedík, an 18th-century protestant pastor who is recognised as the founder of agricultural schooling in the Kingdom of Hungary and in Europe.

Tešedíkovo’s inhabitants however argue that the association of their village with the scholar was random, and that he never lived or worked there.

After 1989 most of the municipalities whose names were changed 40 years earlier managed to get their old names back, with the exception of 13 villages, including Tešedíkovo, according to the village’s website.

One of the towns required to keep its communist-era name was Štúrovo, where a successful referendum was held in 1991 to revert back to the previous name, Parkan, but the result was much the same as in Tešedíkovo, according to Sme. The government refused to change the name without any specific explanation, saying only that the name of the town is also an issue of the state.

The government’s decision left many of Tešedíkovo’s inhabitants, including the mayor, disappointed.

“It’s a slap to democracy,” Mayor Gyula Borsányi told Sme. “The will of the citizens should have greater force, but unfortunately, the ones with the power can decide however they like.”

He maintains the name is a universal historical name, used in both Slovak and Hungarian.

The issue is no longer just a local matter. Kálmán Petőcz, the head of the Slovak Helsinki Committee for Human Rights, noted that it is not a mere “nationalist” conflict.

“I personally consider the [government’s] failure to recognise the valid referendum, that is the right to vote and participate in the administration of public affairs, without any relevant reason, to be one of the most serious cases recently, undermining the very basis of democracy in Slovakia,” said Petőcz, who worked as a high government official responsible for human rights under the government of Iveta Radičová.

Opposition politicians seized the case as an opportunity to criticise the government. The leaders of Most-Híd, the Slovak Democratic and Christian Union (SDKÚ) and the Christian Democratic Movement (KDH) issued a joint statement in which they claimed that the name Pered is Slavic in origin, and is the shortened version of the name Prěděslav, one of the sons of Svätopluk.

They accused government politicians of arrogance and of negating the basic principles of democracy, and warned that while now the issue only concerns the citizens of Tešedíkovo, in the future it could affect the whole country.

Most-Híd MPs even proposed an amendment that would require the government to respect the results of referendums where citizens vote in favour of changing their municipality’s name, the SITA newswire reported.

On October 27, activists from the Bilingual Southern Slovakia movement, who did not disclose their identities, replaced the village’s signs with ones carrying the name Pered, and mailed the old signs to Minister Kaliňák and to the ombudswoman, Jana Dubovcová.

The ombudswoman confirmed that she received the signboard and plans to respond to the citizens’ complaints.

The parcel was accompanied by an open letter to the government.

“There is no legal requirement for the Slovak origin of names of municipalities in Slovakia,” the letter reads, dismissing the arguments of the ministry’s terminological commission that the name ‘Pered’ cannot be used because it is of Hungarian origin. In fact there are several villages and towns with names of Hungarian or German origin, including Pezinok, Žilina, and Tornaľa, and they are apparently not breaking the law, the letter reads.

They claim that Pered is a Slovak name, as required by law, since the village has been called that in Slovak by the Slovak people living in the area, and noted that the village has never had any other Slovak name and it had even been its official name during the interwar Czechoslovak Republic until 1948, when the communist authorities changed it to Tešedíkovo.

“Pered became Tešedíkovo because the communist state made decisions on the names of villages absolutely wilfully; they would change what they did not like (including the names of some Slovak villages), regardless of what the local citizens wanted,” the letter reads, adding the current government’s decision not to change the name back is “the worst continuation of this tradition of wilful decision making”.

The activists admit they resorted to civil disobedience because the government refused to execute the valid, referendum-based decision of the citizens, and so they executed it instead by changing all the signs.

The letter then calls on the minister to agree to the name change.

Kaliňák, however, is unlikely to be persuaded. On November 4 he claimed that regardless of the origin of the name Pered, it is the official name of the village in the minority language, the SITA newswire reported.

“The name Pered is [listed] under the Slovak name [on the signs] because it is a Hungarian name,” he said, as quoted by SITA. “And now they will suddenly say that it is actually a Slovak name, so why should a village have two Slovak names?”

But the activists claim that there are several municipalities in Slovakia whose names are identical in Slovak and Hungarian, such as Baka, Kalonda, or Zalaba, and nobody is accusing them of breaking the law.