THE FOREIGN Affairs Ministry postponed its national human rights strategy after critics organised a mass spamming of the ministry’s email addresses. Several religious organisations, MPs and supporters of traditional family have slammed it for furthering lesbian, gay, bisexual, transgender and intersexual (LGBTI) rights. The ministry, which now oversees the human rights agenda, has moved the deadline for submitting the human rights strategy to the government from September 30, 2013 to June 2014. 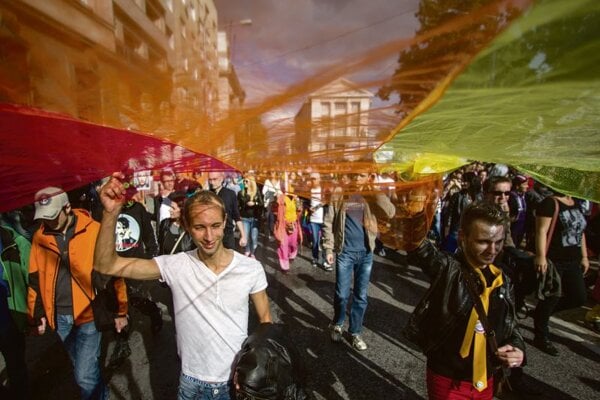 THE FOREIGN Affairs Ministry postponed its national human rights strategy after critics organised a mass spamming of the ministry’s email addresses. Several religious organisations, MPs and supporters of traditional family have slammed it for furthering lesbian, gay, bisexual, transgender and intersexual (LGBTI) rights. The ministry, which now oversees the human rights agenda, has moved the deadline for submitting the human rights strategy to the government from September 30, 2013 to June 2014.

NGOs fighting for human rights have recently expressed support for the strategy, which aims to improve human rights in Slovakia. Yet, they say there has been a void in human rights protection ever since the post of deputy prime minister for human rights and national minorities was abolished in 2012.

“We need a strategy that will clearly point to the mutual interdependence of the principles of democracy, the state of law and the observance of human rights,” Kálmán Petőcz, chair of the Helsinki Committee for Human Rights in Slovakia and former high government official responsible for the human rights agenda under the Iveta Radičová government, told the press on October 24, as quoted by the TASR newswire. He added that the strategy will become a political promise which will define the tools and methods for improving human rights protection in Slovakia.

Forty representatives of NGOs and civil society organisations and 23 individuals signed a declaration to support the human rights strategy. Among them were representatives of the Helsinki Committee for Human Rights, Možnosť Voľby (ProChoice), the Milan Šimečka Foundation, the Centre for the Research of Ethnicity and Culture, the Institute for Public Affairs, People Against Racism, Initiative Otherness, the Slovak Anti-Poverty Network, SOCIA, the Roma Institute, the Slovak UNICEF Committee and Amnesty International Slovakia.

The signatories criticised the campaign against the Foreign Affairs Ministry, saying that the strategy does not only focus on the rights of the LGBTI community, but that it also aims to protect all endangered groups, including children, seniors, minorities, religious communities, women, immigrants, asylum seekers, the disabled and poor people, the SITA newswire reported.

The strategy will be the first full-fledged document on the protection and support of human rights in Slovakia. Though the country has adopted several conceptions and action plans for various endangered groups in the past, “a comprehensive document which would unify and define priorities in these areas, combined with human-rights values and standards, is missing”, Foreign Affairs Minister Miroslav Lajčák told The Slovak Spectator.

NGOs, however, also point to numerous laws and actions approved by the current government that infringe on human rights, from the refusal to allow the village of Tešedíkovo to adopt its historical Hungarian name of Pered in spite of a valid referendum, to the controversial police raid of a Roma settlement in Moldava nad Bodvou in June.

Moreover, Rudolf Chmel, former deputy PM for human rights and national minorities, who currently serves as an MP for the Most-Híd party, agreed that the government and state institutions pass laws and measures which are at odds with human rights principles. He blames the government for marginalising human rights issues and failing to deal with difficult cases, as reported by SITA .

Anti-campaign to derail the strategy

In early September 2013, the Foreign Affairs Ministry revealed that it had become the target of an organised campaign to spam its email addresses with messages delivering “personal invectives, rough offences and hateful blackmail” that “fanatical opponents of human rights in Slovakia” had been sending to the secretary of the government’s Council for Human Rights, National Minorities and Gender Equality.

The hate-fuelled campaign started after the draft strategy was first presented in mid August. Discussions about the document focused especially on support for the rights of sexual minorities. The ministry announced that if the campaign did not stop, it would take appropriate legal steps, including submitting criminal complaints against specific people.

The deadline was eventually postponed. The ministry said it wants to use the extra time to hold substantive, constructive and tolerant discussions about the document, TASR reported on September 5.
According to Petőcz, the strategy was originally supposed to be presented on September 30, 2012 by the previous government. It has since been postponed three more times.

Yet, Petőcz, as well as other NGO representatives addressed by The Slovak Spectator, welcomed the decision, saying there will be more time for a public discussion of all aspects of the strategy. Moreover, if the country wants to have a quality strategy, it also has to invite civic associations, working groups and members of committees within the Government Council for Human Rights, National Minorities and Gender Equality to the discussion, Andrea Mesochoritisová from ProChoice told The Slovak Spectator.

Jarmila Lajčáková, a research fellow at the Centre for the Research of Ethnicity and Culture, added that for some people, the term ‘human rights protection’ is “very abstract”, and they often do not understand that human rights can provide protection against corruption, violence or illegal practices by officials.

Lajčák said that some people have used the draft strategy to support negative sentiments and to spread lies. Contrary to critics’ accusations, the draft strategy does not propose sex education for children, “sexualisation in pre-school facilities”, taking children away from their families or legalising homosexual marriages, he explained.

“It would be appropriate if people first learned about what the strategy seeks and what it should contain in detail, and then respond,” Lajčák said.

The Foreign Affairs Ministry, together with human rights supporters, will set up a series of seminars and workshops focused on various groups in society that need protection, and it plans to invite as many people as possible to allow all affected groups to comment on the proposals, Lajčák said.

He explained that these meetings will start with less controversial sections, and gradually proceed to the most difficult issues, and try to reach a consensus and propose solutions.

Prime Minister Robert Fico said he saw no need to keep the post of deputy prime minister for human rights and national minorities, which was established in 1998, only several days before announcing the final composition of his government in April 2012. The position officially ceased to exist on October 1, 2012, when the amendment to the competence law came into force.

The responsibilities of the deputy prime minister were divided among several ministries, including the Foreign Affairs Ministry, which is now responsible for deciding on subsidies to support human rights and prevent discrimination. Moreover, the foreign affairs minister chairs the Government Council for Human Rights, National Minorities and Gender Equality.

NGOs described the decision as a “very unfortunate step”. It deviated completely from previous efforts to unite the agenda under one institution, Šarlota Pufflerová, head of the Citizen, Democracy and Accountability non-governmental organisation, told The Slovak Spectator.

NGOs also question the decision to transfer the human rights agenda to the Foreign Affairs Ministry, since its main task is to represent Slovakia abroad. Additionally, there was no institution to cover implementation of international documents into legislation, Pufflerová said. This changed on November 1 when another amendment to the competence law, ordering the ministry to coordinate tasks within the human rights agenda, came into effect.

Pufflerová said the ministry lacks enough personnel to deal with the issue, noting that there were dozens of people working on the human rights agenda in the past, but there are currently only three or four people at the ministry who are responsible for it.

“If you abolish one of the few institutions in the executive [branch] that deals with a broad agenda and you vaguely scatter it among several ministries, you de facto eliminate the issue, since nobody is ‘handling’ it properly,” Lajčáková stated.