POOR cooperation between science institutions and the private sector is a long-term problem in Slovakia, but the Education Ministry has contributed nearly €280 million from EU funds and the state budget to create eight science parks at six universities this year in an attempt to change this. 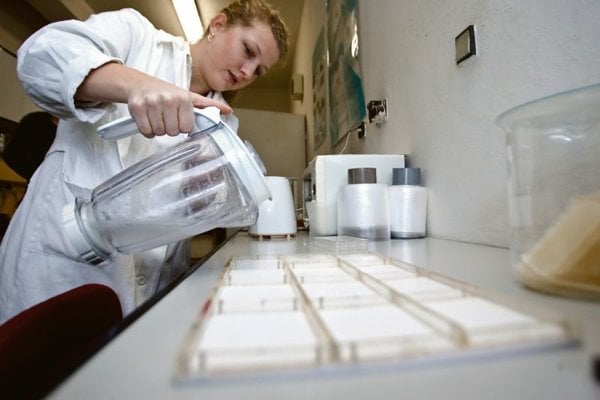 POOR cooperation between science institutions and the private sector is a long-term problem in Slovakia, but the Education Ministry has contributed nearly €280 million from EU funds and the state budget to create eight science parks at six universities this year in an attempt to change this.

It will be up to the universities to make the parks self-sustaining by convincing private sector firms to cooperate and luring professional scientists. Still, university officials are complementing the ministry efforts and point out that neighbouring countries already have similar set-ups.

“This effort came at the eleventh hour,” Stanislav Kmeť, the vice-rector of Technical University in Košice (TUKE), told The Slovak Spectator. “In Slovak territory there are no complexes which could be called science-technology parks. Slovakia needs this type of infrastructure for economic and social development.”

Universities will have to finance some €15 million of these projects on their own. Construction of the first of the parks began in March 2013 and they should be finished in June 2015, according to the Education Ministry press release.

“Therefore, we can consider the year 2013 as revolutionary in the sphere of support of building top technological centres created at our universities,” Čaplovič told the press in July.

Universities, the Slovak Academy of Sciences (SAV) and the Education Ministry believe that universities will be able to run these parks on their own since they plan to apply for various grants and some research will be commercially oriented.

“The obligation of receivers of EU funds is to secure financial sources for the period of five years, which is the period for preserving the science parks project,” Kaliňák said, as quoted by the Pravda daily.

Private firms already cooperate with universities and the SAV, but so far much of that comes in direct relation to students’ education rather than research. Though the private sector has welcomed the science park projects, they have not yet specified how they might cooperate with them.

“It is too early to comment on possible cooperation or supporting of science park construction projects since we [Volkswagen] have not been asked to cooperate yet,” Vladimír Machalík, spokesperson for the Bratislava-based German carmaker Volkswagen Slovakia (VW), told The Slovak Spectator. “Our potential support depends on concrete conditions which were not specified yet.”

Based on the latest available data from the EU statistics authority, Eurostat, in 2010 Slovakia spent just 0.63 percent of its GDP to fund scientific research and development. The EU-wide average is 2 percent. Spending on scientific research and development has grown annually by 10 percent in recent years, and in the past two years it grew by 25 percent on average, reaching €241 million in 2011, Kaliňák said in March. He added that an important part of spending on science is the funding provided by private businesses, which in 2011 reached more than €159 million.

Science parks should be places for higher quality research, enabling universities to participate in more science programmes, which means they would receive more money, according to university representatives.

“Research projects will be one of the most important sources for science park funding,” UK Vice-Rector Ján Turňa told Pravda. “The selling of results and contractual research will be the second main source of funding.”

STU expects that the University Science Parks (UVP) project will create better conditions for research, which will make it even more attractive to partners in foreign countries and improve the STU’s access to finances for research, STU spokesperson Andrea Hajdúchová told the The Slovak Spectator. Since 2000, the STU has tallied 137 patents by its employees and 33 utility models, which are applied in practice and give jobs to people in Slovakia and abroad.

“However, those successes are achieved in bad conditions without proper technology which is compensated by enormous effort,” Hajdúchová said. “The [science parks] project will increase the effectiveness of research; moreover, investments will decrease operating expenses. Therefore sustainability of the UVP STU project will not be a problem.”

Work in the science parks

Another challenge for the university science parks will be to convince top scholars to stay. This is difficult because they demand sufficient salary and a good team that they can work with, said Renáta Králiková Deputy Director of the Slovak Governance Institute (SGI), an NGO, as reported by Pravda.

“Currently, almost all research is done in teams. Experts must enjoy the work with their team, they have to have conditions for publishing, visiting conferences, have money for research and so on,” Králiková told Pravda. “That is why people prefer to stay abroad.”

On the other hand, there are still plenty of extraordinary scientists in Slovakia, Chairman Jaromír Pastorek of the Academy of Sciences (SAV) told The Slovak Spectator, adding that the positive aspect of Slovak scientists working abroad is that they accumulate experiences they can use when they come back.

Thus far, wages at Žilina University’s science park appear sufficiently motivational, according to Zábovský. The ministry will monitor the number of new jobs created by these projects, especially the employment rate of scientists less than 35 years old, Kaliňák said.

The biggest lingering question for the project is how involved private companies will be in collaborative research.

One SPU project involved cooperating with the Indonesian government on researching ways to grow wheat in tropical Asian countries. Statistics show that a growing number of people in Indonesia are consuming wheat-based food, but the country has no history of growing this crop so wheat or wheat flour must be imported there, Harsha E. Joesoef, the former ambassador of the Republic of Indonesia to Slovakia, told the SITA newswire in April 2012.

The SPU provides a study programme for Indonesian students, including hands-on work carried out in cooperation with Osivo Zvolen and Istropol Solary, a company in Horné Mýto that has expertise in cultivating new varieties of field crops.

“They should leave this university with knowledge that probably no student in Indonesia has,” Peter Bielik, rector of the SPU, told The Slovak Spectator in April.

TUKE significantly improved its cooperation with the private sector after it created 17 research centres using EU funds, Kmeť said. Similarly, another three centres of applied research were created which actively cooperate with 20 firms.

“Research and development activities with real results take a long time, therefore we will see real results [of cooperation] in the coming years,” Kaliňák said. “However, we can already say that the level of cooperation between both [science and private] sectors is gradually increasing.”