THIS YEAR’S Bratislava in Movement festival offered yet another programme of Slovak and international performers displaying the latest trends in contemporary dance. While many of this edition’s performances were worthy of praise, two were particularly notable: one creatively explored complicated emotional entanglements, while the other interpreted the experiences of a young Polish Jew separated from his family in the Second World War. 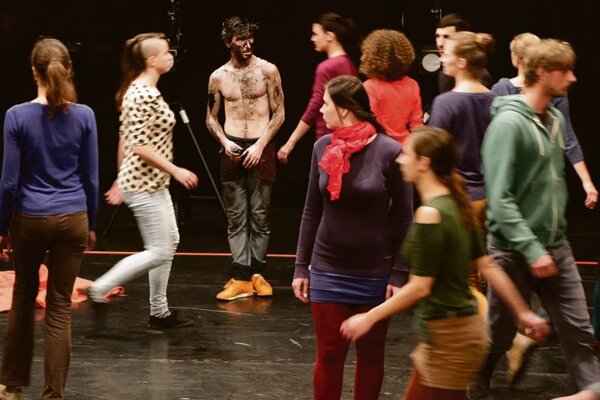 THIS YEAR’S Bratislava in Movement festival offered yet another programme of Slovak and international performers displaying the latest trends in contemporary dance. While many of this edition’s performances were worthy of praise, two were particularly notable: one creatively explored complicated emotional entanglements, while the other interpreted the experiences of a young Polish Jew separated from his family in the Second World War.

Expanded to a full month, from October 3-28, this year’s festival opened with Petí Comité, by Spanish choreographer and dancer Teresa Nieto and her company. That was followed by Wim Vandekeybus’ Ultima Vez dance company and their What The Body Does Not Remember, and other foreign productions, including Ottetto by En-Knap from Slovenia and two Czech performances, one of which was String Quartets by the ProART Company.

Choreographed by Czech Martin Dvořák and Sri Lankan (now living in the Czech Republic) Isira Makuloluwe, String Quartets was inspired by the music, the life and the complicated intimate relationships of Czech composer Leoš Janáček. However, it ventured beyond simple facts and creatively explored the emotional ups and downs of a ‘ménage a quatre’, as opposed to a ‘ménage á trois’.

Refusing to let the theft of their possessions from the dressing room affect their performance, the dancers showed the full potential of Janáček’s ‘violin quartets’. Janáček had an affair with a married woman, and this created a parallel to the musical form of his compositions. This aspect was subtly illustrated by ‘strings’ that kept the dancers locked in passionate though not always happy connections.

The final section of the performance differed from the earlier scenes in terms of both the music (a string quartet by modern composer Miloslav Ištvan played live by Miloslav Ištvan Quartet) and the means of expression and mood. However, the theme of fatally obsessive love, wherein a person is unable to free himself from an emotionally destructive bond despite being driven to unbearable pain, could be observed here, too.

Generally, the piece was interesting but perhaps a little too long, with barely perceptible transitions from one part to the next making it difficult to follow after a while. But the beautiful music and the ever-present theme of love “polygons” and strings that keep people bound together against all odds, kept the audience immersed in the piece.

The festival culminated in The Painted Bird – Bastard by the Palissimo Company. The dance company, founded in the US by Slovak expat Pavol Zuštiak, seeks to “create a dialogue with the public through its performances, research and teaching”, the bulletin states. This was evident at the Bratislava staging, for which they selected nearly enough extras to fill the entire stage, who played an important role in the final part.

“In New York, for example, the group was more heterogeneous as far as different ethnicity, appearance, age, etc., but also here, we strove for diversity,” the performer, Jaro Viňarský, told The Slovak Spectator after the show. Many of the dancers in the crowd scene were amateurs, picked through ads and auditions, and trained only three days before the performance.

The emotionally dark piece, performed to the live music of Christian Frederickson, is the first part of a trilogy called The Painted Bird, inspired by the book by Jerzy Kosinski (born in Poland as Józef Lewinkopf), who wrote of his Second World War experiences when he was sent away “to safety” by his parents, but ended up lost, wandering through eastern Europe. The emotionally moving book was transformed into a more digestible yet still gripping theatrical piece, which incorporated all the elements of dance and physical theatre, and even featured Viňarský singing. This was all achieved with a simple set and costumes, and unobtrusive light, projection and sound design.

In the A4 – Nultý priestor theatre space, the stage was simple and the close proximity of the performers enabled the audience to feel involved with what was happening onstage. Viňarský revealed that in the sequel the audience actually becomes part of the performance, exchanging places with the dancers, only to be allowed to return to their seats in the third part. The music was created spontaneously during rehearsals, both Zuštiak and Viňarský agreed.

When asked by The Slovak Spectator why such a moving book about someone living in a completely different era resonated so strongly with him, Zuštiak said that this resulted from the confluence of two events: his personal questions concerning identity and how the environment we live in defines who we are, and the issue of moving, displacement, or being uprooted.

“And also the desire to belong somewhere and the fact that we are often refused by our own [kin],” Zuštiak added.

“I would not call the performance dark,” Viňarský said, “but would instead say that the issue is not easy. It is not a ‘rosy comedy’ and it can be considered a little depressing, but I recommend anyone who got involved in this piece to read Kosinski’s book.” He added that this production was based, more than any other he has performed in, on interpretation, and that it absorbed him emotionally and even required some actual acting.

The especially high attendance in A4 Nultý Priestor venue was perhaps due to the fact that in the course of the festival, the piece received the prestigious New York Dance and Performance Award (informally called the Bessie, named in honour of choreographer Bessie Schonberg).

“The award delighted me, but we are still waiting for donors or tutors,” Zuštiak said with a smile. “But it is true that media attention intensified and increased.”

As for what the award meant to them and how it has changed their lives, Viňarský said it did not feel like it made a big difference, but admitted that “although I haven’t admitted to myself the importance – an award here, an award there – the truth is that when we were announced and I went to accept the prize to a big applause, [the feeling] was strong, a sort of satisfaction”.

So, perhaps in the future Slovak modern dance fans will get the chance to see the two remaining parts of the Painted Bird trilogy, and also the company’s new piece, Endangered Pieces.