LONG considered to be uneventful, regional elections in Banská Bystrica have delivered a surprising result and brought political extremism into the spotlight. 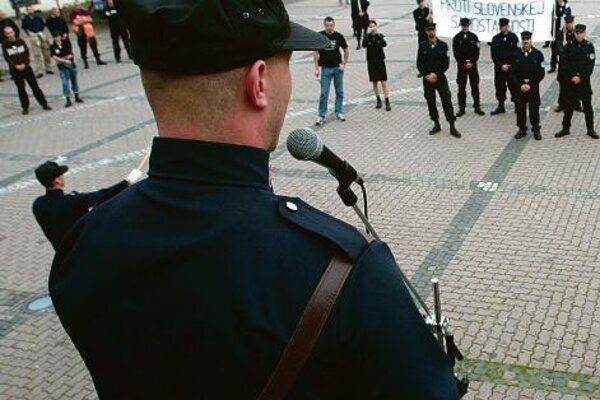 LONG considered to be uneventful, regional elections in Banská Bystrica have delivered a surprising result and brought political extremism into the spotlight.

The leader of the extremist party the People’s Party – Our Slovakia (ĽSNS), Marian Kotleba, who has a history of racist statements and acts, finished as the regional councillor with the single biggest voter support in the whole country in absolute numbers, and also qualified for a second round run-off in the governor’s race in Banská Bystrica Region.

Kotleba altogether received 26,251 votes in the region, with 4,098 of them coming from the city of Banská Bystrica, his hometown.

Kotleba, originally a secondary school teacher, is well-known on the margins of the Slovak political scene. He founded and led the Slovenská Pospolitosť (Slovak Togetherness) far-right political party, which was later banned by the Interior Ministry and existed only as a civic organisation. He frequently organised and participated in anti-Roma demonstrations or marches commemorating the Nazi-allied wartime Slovak state and its president Jozef Tiso. He has been detained and charged repeatedly for crimes including racial defamation.

Kotleba has made several attempts to enter mainstream politics. In addition to his candidacy for the Banská Bystrica regional president in the 2009 regional elections, in which he ended in fourth place with 13,000 votes, he founded ĽSNS, which ran unsuccessfully in the 2012 parliamentary elections and now brought him success in the regional elections.

Where the votes are from

Observers see almost no chance for Kotleba to succeed in the second round against the Smer candidate, but nonetheless find his strong showing disturbing.

Kotleba is an extremist who never refers to Roma as anything other than Gypsies in the pejorative sense, and who proposes fascist solutions to Roma issues, said political analyst Miroslav Kusý, who believes that 20 percent for a candidate like that is really symptomatic for the general attitude toward Roma issues in Slovakia.

Political analyst Juraj Marušiak from the Slovak Academy of Sciences noted that the overall support for Kotleba’s extremist ideas is hard to interpret due to the low voter turnout.

The turnout nationwide was slightly more than 20 percent. Even Banská Bystrica, the region with the highest turnout, just topped 24 percent.

There are several factors behind Kotleba’s high vote-count, namely the economic and social situation in the region and the problems of the Roma in the region, especially in the so-called “hunger valleys” typical for the Bystrica region, Marušiak told The Slovak Spectator.

“Another thing is that Kotleba gets mainly the votes of younger voters, a protesting electorate,” Marušiak said.

Marušiak sees Kotleba’s victory first and foremost as representative of a defeat for Kaník.
“Planting him into the campaign was probably a big mistake of the right, and an indicator of the fact that the right has lost touch with reality,” Marušiak said.

“No right-wing extremism will rule Banská Bystrica Region,” Fico told journalists on election night.
He stressed that Kotleba’s defeat of Kaník in the election is indicative of a crisis within the right.

“It’s a problem of the right wing of the political spectrum that they let people like Kotleba exceed the standard political parties,” Fico said.

Kusý calls that nonsense. Just as the problems of the Roma are the problem of the entire country, or perhaps even beyond, so is Kotleba, he said.

Media: What to do?

Kotleba’s election success has proved particularly problematic for the media who tended to ignore him and his party in the past. As one of the two most successful candidates, Kotleba can no longer be shunned.

However, the Aktualne.sk news portal issued a statement saying they will not report about Kotleba’s campaign before the second round of the election, and the Hospodárske Noviny and Pravda dailies said they wouldn’t address him either. The Sme daily ran an interview with Kotleba the day after the first round of the elections and its editor-in-chief, Matúš Kostolný, wrote in his column that “in this moment it’s not possible to act as if Kotleba did not exist”.

Kotleba will be featured on two election debates: on the public-service RTVS, which broadcasts a debate for each region live on the radio and subsequently also on TV, and on the TA3 news channel, which was also the only one to have Kotleba in its studio before the first round.

TA3 earned criticism from other media and some politicians for that decision. After the elections, the incumbent regional governor Maňka in an interview with Sme blamed Kotleba’s appearance on TA3 for the high percentage of votes he received.

While media, especially the public-service ones, cannot ignore Kotleba anymore, politicians should, political analyst Grigorij Mesežnikov said in an interview with The Slovak Spectator.

“Representatives of parties that are really democratic shouldn’t participate in such debates [that feature Kotleba as a participant],” Mesežnikov said, adding that it would be a strong signal that decent politics have nothing to do with the likes of Kotleba.

The Slovak Association of Fighters Against Fascism, based in Banská Bystrica, also called on Maňka not to accept invitations to any direct debates with Kotleba, the TASR newswire reported on November 13.

Despite the low turnout in the elections and the low political support from rightist parties for Kaník, Kotleba’s victory is not to be underestimated, Mesežnikov said. The trend shows Kotleba’s popularity since the 2010 elections rose fivefold in the city of Banská Bystrica. According to Mesežnikov’s calculations, with the current support Kotleba and his party could even achieve the 5-percent threshold to enter parliament.

This is however not due to some recent strengthening of anti-Roma sentiments. The extremist received his highest number of votes in the governor election in 20 municipalities of the region, many of which have little to no Roma residents.

It is thus a question of opinion, and of values that the people voting for him harbour, Mesežnikov said.

“It has been bubbling in the people,” Mesežnikov said. “But now such opinions are also voiced by other politicians, which makes Kotleba seem less unacceptable to people.”

Mesežnikov blames the nationalist discourse that has been going on in the country for a longer time, when even the ruling parties in the past were promoting various mythologies involving “old Slovaks” and the Great-Moravian ruler Svätopluk.

Svätopluk’s statue, which was erected at Bratislava Castle at the end of the first Fico government in 2010, has become the cult place for supporters of Kotleba, Mesežnikov said.