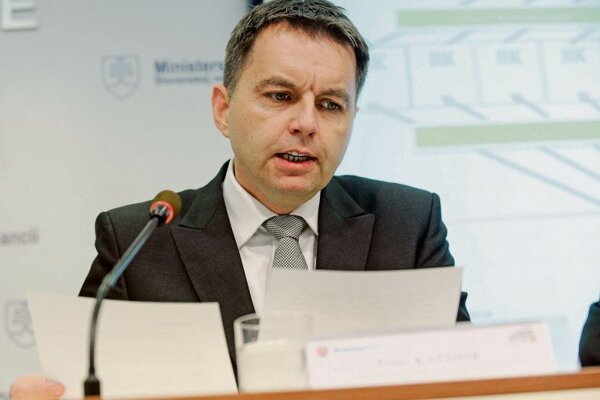 In parallel with the tax licence, which will see some companies pay a flat annual fee to operate, the government plans to cut the corporate income tax from 23 to 22 percent. In the wake of talks between the government and employers, some businesses are coming to grips with the licence plan as a “necessary evil”.

They also argue that the income tax cut is too subtle to have much impact in attracting investments. The tax licensc fees will first be paid in 2015 for the 2014 taxation period.

“In principle we understand it as a necessary evil,” Rastislav Machunka of the Federation of Employers’ Associations (AZZZ), an employer interest organisation, told The Slovak Spectator. “The Finance Ministry conditions the lowering of the rate of corporate income tax by the introduction of the licence.”

The self-employed and newly established companies will be exempt from the tax license during the first year of running their business, said Finance Minister Peter Kažimír, as quoted by the SITA newswire on November 11.

There will be three tax licence rates: companies that are not value added tax (VAT) payers will pay €480; the state will cash in from VAT payers €960 and all companies with revenues higher than €500,000 will pay a licence at €2,880, a compromise the state achieved through negotiations with employers, Kažimír said.

While Prime Minister Robert Fico called the tax licence a preventive measure compensated by the planned reduction of corporate taxes from 23 to 22 percent, some have pointed to his pledge earlier this year that his government will not introduce higher or new taxes.

“Decreasing the corporate tax rate is a move in the right direction, however the proposed rate is still far from the original 19 percent rate,” Ján Dinga, analyst with the Institute of Economic and Social Studies (INESS), told The Slovak Spectator in an earlier interview. “The problem is that the government plans to compensate for this drop through the introduction of tax licences.”

As much as 25 percent of the companies have not paid over the past four years a single euro on taxes, according to the finance minister. Since 2006, the number of firms with zero tax liability has increased by 40,000, from 52,000 to 92,000 companies, the ministry said. The highest number of firms with zero taxes, 79 percent, operate in the accommodation and dining sector, while the fewest “zero tax” firms come from the category of information and communication at 45 percent, according to a ministry statement.

Kažimír expects that the tax licences will also “clean up the business registry” since there are 10,000 entities recorded, which are not responding”. He said the policy would motivate owners of such companies to liquidate the company and erase it from the registry.

The tax licences are one of the worst decisions of the Fico government, said the right-leaning opposition parties, including the Slovak Democratic and Christian Union (SDKÚ), the Christian Democratic Movement (KDH) and Most-Híd, united under the People’s Platform.

“The government repels people from running business, which will be reflected in the employment rate in Slovakia,” KDH deputy chairman Miloš Moravčík said on November 12 after a session of the parliamentary committee for finances and the budget, as quoted by SITA.

Ivan Štefanec of the SDKÚ agreed that the tax licences will negatively impact employment.
“The introduction of this license will only make things worse,” he said, according to SITA. “The fight against tax evasion cannot be fought by new taxes.”

The licences would certainly not worsen the business environment, responded the Finance Ministry, adding that starting or investing businesses will not be affected by the licence because if they are not doing well, they can calculate the licence into their costs for the next three years.

Martin Hošták of the National Union of Employers (RÚZ), another employer interest organisation, said his organisation objected to the fact that the tax was introduced “instead of seeking room for further savings”.

“It is a new tax and we never know whether or not its rate is going to increase in the future,” Hošták told The Slovak Spectator, adding that he nevertheless understands that the ministry’s latest proposal is a “result of compromise”.
Lower corporate income taxes are a key issue for the AZZZ, Machunka said, adding that though cutting the tax by one percentage point is unsatisfactory, it is “still better than nothing”.

The key argument of the Finance Ministry is that approximately 60 percent of corporate entities do not pay taxes.

“I am unable to judge whether the 60 percent figure is correct,” Hošták said. “Reasons for not paying taxes are varied and speculation is not always involved.”

A large share of this number are firms which ended their real business and whose owners have not yet liquidated them, Machunka said.

“They have not done anything wrong but in that moment they did not have suitable activities for [the companies] and they have been waiting for some better prospect and this is perhaps the considerable part of those companies, which did not pay taxes,” Machunka told The Slovak Spectator.

For example real estate development firms might have concluded a project and are waiting for the next chance, said Machunka.
If the ministry also wants this measure to motivate firms to achieve profit, they should also reassess, along with the rate, the practice of paying payroll taxes from dividends, Machunka said.