WHILE it may be a cliché to say that music forms a universal emotional connection between performers and audiences, it can also be said that it creates a literal bond between the performers themselves, as the recent wave of collaboration between Slovak and US jazz musicians illustrates. 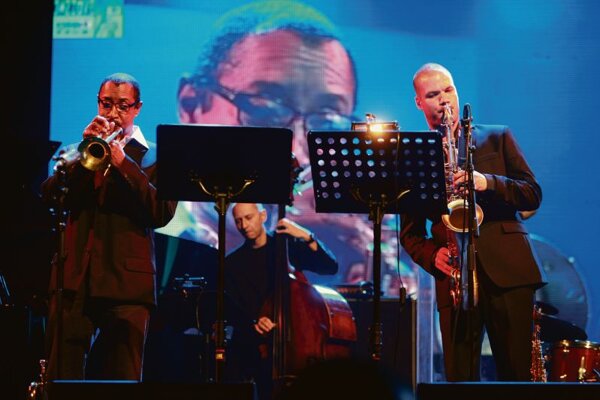 WHILE it may be a cliché to say that music forms a universal emotional connection between performers and audiences, it can also be said that it creates a literal bond between the performers themselves, as the recent wave of collaboration between Slovak and US jazz musicians illustrates.

The Slovak Spectator spoke to several musicians involved in such cross-border collaborations about the origins, success and continued prospects of their projects.

On the evening of October 26, Bratislava Jazz Days 2013 was opened by Nikolaj Nikitin Quintet, featuring American trumpeter Michael “Patches” Stewart, and on stage B, the Chicago Blues Connection, consisting of three Slovak and two US musicians. On October 27, the festival featured Štefan “Pišta” Bartuš with Italian pianist Antonio Farao and American saxophonist Andy Middleton. In mid November, the Slovak AMC Trio toured Poland and Košice with US trumpeter Randy Brecker.

As for how the cooperation started, Martin Marinčák of AMC Trio offered a brief reply: “We addressed Randy, he liked our music and agreed…”

“Three years ago, we did a small tour in the US and Canada,” Mário “Gapa” Garbera of the Chicago Blues Connection said via email. “We wanted to see and hear as much as possible and we went to one of the oldest and most famous clubs in Chicago, the Kingston Mines, twice, and saw drummer Terrence Williams play there. After the concert, I met him, asked for his email and invited him to Slovakia a year later. This is the third time he has accepted, and he enjoys playing electric blues with us. He is an excellent drummer, playing mostly gospel.”

“As for the Hammond organ player, I have wanted to perform with one very much. I wanted an American Hammond player, preferably one who plays gospel, which I finally succeeded in finding. I wrote an email to Yaahn Hunter Jr, sent him some sound samples, explained the conditions and he agreed.”

Slovak saxophonist Nikolaj Nikitin has been playing with “Patches” Stewart for some time already. “After the Poogie Bell Band concert in Bratislava, where Slovak Juraj Griglák and ‘Patches’ also played, I asked the latter to collaborate. We have done about 15 concerts and two CDs together.”

“I met Andy in a Piešťany music club where we had a Christmas concert,” Bartuš explained. “My band with Hanka Gregušová and Andy and his band from Vienna … played together in Piešťany and then I asked him to collaborate on my project with my own music.”

“As for Antonio,” Bartuš continued, “he was lured into a collaboration with my friend (and band mate) Vladimir Kostadinovič [from Serbia], who introduced us.”

Much of the collaboration occurs through the internet. All scores and music samples are sent via email and only one or a few rehearsals are necessary before a concert or a tour.

As for future plans, Marinčák revealed that he wants to continue his collaborations with Randy Brecker, but also to work with Mark Whitfield and Scott Henderson. “Gapa” Garbera spoke of a piece composed with Americans, while Nikitin announced a December tour with Stewart to promote their recent album, Music for Boys and Girls Vol 1. Bartuš recorded his album Collectivity with Andy.

Garbera said that his band had become a regular, live band which has receivd offers for festivals, even abroad. He added that it is crucial for a good connection to work, not just on a musical level, but also on a human level, as during tours musicians spend much more time offstage than onstage.

Fortunately, it seems that this understanding does not require a common language, or a common socio-cultural background. And this is good news for jazz fans everywhere.