THE FOUNDATION stone of a Memorial of Slovak Olympic winners was laid at the National Cemetery in the town of Martin on November 6. Until now, there have been a total of 79 Olympians with Slovak roots, going back to the Austro-Hungarian Empire. Their names will be carved in the monument in gold, silver and bronze cards. 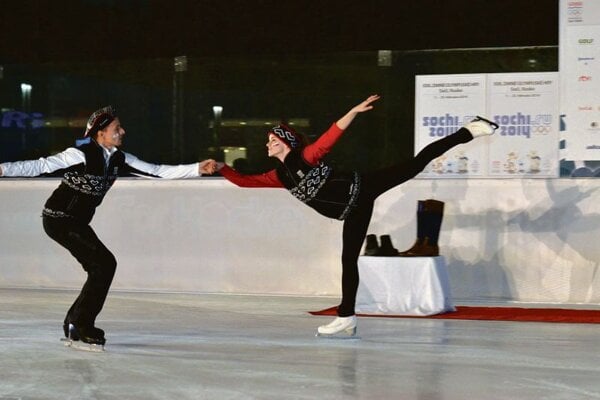 THE FOUNDATION stone of a Memorial of Slovak Olympic winners was laid at the National Cemetery in the town of Martin on November 6. Until now, there have been a total of 79 Olympians with Slovak roots, going back to the Austro-Hungarian Empire. Their names will be carved in the monument in gold, silver and bronze cards.

The stone monument, about 24 square metres in size, is to cost €40,000 to €50,000, to which the town of Martin will contribute €20,000, with the rest paid for by the Slovak Olympic Committee (SOV) and the Olympic champions themselves, the SITA newswire wrote.

“Out of 79 holders of Olympic medals, 24 are no longer with us,” SOV vice-president Vladimír Miller said. “It is necessary to honour Slovak Olympic medallists; not everyone views Slovak international athletes [as being] at the top level. In many countries in the region, successful athletes receive a pension and certain social and material conditions for an easier existence. We, alas, have medallists in sports who are practically struggling with poverty. Thus, I am very happy that this idea could materialise,” Miller added.

The monument’s foundation stone was touched for good luck by canoe slalom racer Michal Martikán, who holds five Olympic medals. “This is a strange site for those of us who still compete actively,” he said. “But I think that it’s really a big honour to acknowledge athletes who inspired not only us, but also many young people,” Martikán said.

“It will depict a landscape scattered with people’s business cards. Some will be inscribed with the names of Olympic winners,” he explained.

“They will be loosely scattered, thus creating a random mosaic on a pedestal. Big round stones from the Tatras will be placed on the pedestal in the form of the Olympic symbol, which will also hint that the Olympic ideals stand above all athletes, above all people,” Vychodil added.

From Austro-Hungarian times until now, a total of 79 Slovaks have managed to win medals at the summer and winter Olympic Games. In the Austro-Hungarian Empire, six Slovak natives won Olympic medals, while in the Czechoslovak era, there were 53. Independent Slovakia has 20 Olympic medallists.

The Slovak Olympic Committee also presented the collection of official attire for the national team at the Olympic Fashion Show on Ice in Bratislava’s Avion Shopping Park.

“Their clothes will include the traditional Čičmany pattern [typical for this central-Slovak village and easy to identify],” SOV President František Chmelár said, adding that the Čičmany pattern is also part of the promotional campaign.