Slovakia’s business environment is not improving in global comparisons. In fact, international rankings measuring the country’s level of competitiveness for investors show the contrary. In September 2013, when Slovakia saw its seventh consecutive drop in the Global Competitiveness Report, government officials blamed entrepreneurs for being political and biased. Prime Minister Robert Fico dismissed the report and showcased the previous year’s result in the World Bank’s Doing Business ranking, which ranked Slovakia as the best in the Visegrad Group region. However, there is little about the results of the recently published 2014 Doing Business to be proud of, as Slovakia’s ratings have dropped in that as well. 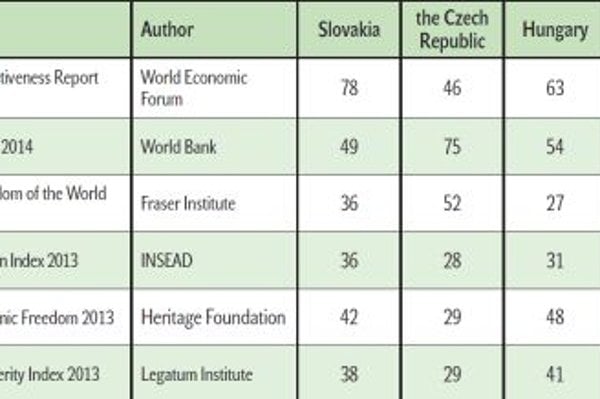 Slovakia’s business environment is not improving in global comparisons. In fact, international rankings measuring the country’s level of competitiveness for investors show the contrary.

In September 2013, when Slovakia saw its seventh consecutive drop in the Global Competitiveness Report, government officials blamed entrepreneurs for being political and biased. Prime Minister Robert Fico dismissed the report and showcased the previous year’s result in the World Bank’s Doing Business ranking, which ranked Slovakia as the best in the Visegrad Group region. However, there is little about the results of the recently published 2014 Doing Business to be proud of, as Slovakia’s ratings have dropped in that as well.

“Times are not very merry for businesses,” Martin Vlachynský, analyst with the non-governmental think tank Institute of Economic and Social Studies (INESS), told The Slovak Spectator. Although there have been some marginal improvements of some administrative processes, “that was unfortunately more than outweighed by the influx of new regulations”, for instance, in the area of paying VAT, he explained.

While economic factors – mainly the government’s tax policy – play a role, Slovakia’s position in the competitiveness rankings really sank in the areas of law enforcement and the judiciary.
Slovakia traditionally receives its worst scores in most rankings in law enforcement, Vlachynský said.

“While in some areas, such as the gradual introduction of some electronic services, there has been an improvement, Slovakia’s neighbours are advancing faster, which then pushes Slovakia down in the rankings,” he added.

The quality of the business environment in Slovakia dropped according to the Doing Business ranking, which placed Slovakia 49th out of 189 countries in its 2014 edition, six spots lower than the previous year.

The results of the ranking, released in late October 2013, show that while in the previous edition Slovakia sat higher than its Visegrad Group neighbours, this year its position worsened even in the regional comparison.

Among the Visegrad Group countries, Poland was the only one to improve, moving up three places to 45th. Hungary fell slightly by two spots to 54th, and the Czech Republic’s position worsened by seven spots to 75th place. The absolute leader in business environment quality according to the World Bank’s ranking was Singapore, followed by Hong Kong and New Zealand.

Slovakia’s worst ranking was in the investors’ protection category, 115th, while Slovakia placed 108th in the category of starting a business, a 28-spot decline and the country’s most significant drop compared to its ranking in the 2013 edition.

“The Slovak Republic made starting a business more difficult by adding a new procedure for establishing a limited liability company,” the ranking report published on the website of the project reads. It also mentions several changes in the area of employing workers, such as the reduced maximum cumulative duration of fixed term contracts, the increased minimum wage and the reintroduction of mandatory severance pay for workers with more than two years of service in the company.

Opposition MP Juraj Miškov blamed the current government for making the process of starting a business more complicated, longer and more expensive. While in New Zealand a company can be started in half a day, in Slovakia it takes 18.5 days and requires seven legal procedures, he told the TASR newswire.

Slovakia also earned a relatively low ranking in the area of paying taxes – 102. Paying taxes is now more costly for companies after the corporate income tax rate was increased and land appraisal values were adjusted, according to the report.

On the other hand, Slovakia placed 11th in the category of registering property, which is by far the country’s best ranking this year. It is, however, two spots lower than in 2013.

GOVERNMENT CLAIMS IT SEES THE PROBLEM

“Yes, it is an unpleasing evaluation, although we are obviously trying to take steps to improve the business environment,” Economy Minister Tomáš Malatinský said in response to Slovakia’s ranking, as quoted by TASR, adding that the worsened ranking is the price Slovakia had to pay for enacting public finance consolidation measures.

Finance Minister Peter Kažimír admitted he was angered by Slovakia’s performance in the ranking, saying that the Doing Business ranking “has its importance and it is to a large extent objectivised”.

Kažimír noted that Doing Business shows that Slovakia is weak in tax administration and tax collection.

“In this area we have never in history gotten better than 100th place,” Kažimír said, adding that it cannot be improved before the UNITAS system is completed and implemented.

The finance minister now believes a set of laws that the parliament recently discussed should help to improve businesses’ experiences in Slovakia.

“In more than 12 laws we improved the business environment by cutting red tape, publishing book closings in one place through the register and lowering the requirements for the number of pages filled out in book closings,” Kažimír said, as quoted by the SITA newswire.

GLOBAL COMPETITIVENESS DOWN TOO

The drop in the Doing Business ranking was preceded by Slovakia’s slip in the Global Competitiveness Report, issued in September 2013. In this ranking, however, Slovakia has been slipping for seven consecutive years and currently stands at 78, a seven-point decline compared to the previous year, and Slovakia’s lowest position ever.

The Global Competitiveness Report, a project of the World Economic Forum (WEF), which evaluates 148 countries by way of a survey conducted among over 13,000 managers, shows Slovakia to be the second least competitive country in the EU, with only Greece placing lower, at 91.

Within the Visegrad Group, Poland led for the first time this year, despite moving down one place to 42nd. The Czech Republic suffered a seven-point drop, down to 46th, and Hungary’s ranking dropped three points to 63rd place.

Opposition parties and businesspeople ascribe the drop in competitiveness to measures adopted by the Robert Fico government.

“The fall of Slovakia in the evaluation of competitiveness is a consequence of pessimism of businesspeople, which stems from barriers to business-making [that remain] unsolved in the long term, and from changes to the income-payroll tax system and labour legislation, which became effective at the beginning of this year,” said Róbert Kičina, executive director of the Business Alliance of Slovakia (PAS), the local partner in the project, as cited in a press release.

With regard to developments in Europe, the WEF wrote that efforts to tackle public debt and avoid a break-up of the euro have taken the focus off addressing deeper competitiveness issues.

Unlike with the Doing Business report, however, the government places little importance on the Global Competitiveness Report.

Prime Minister Robert Fico does not regard Slovakia’s latest ranking by the WEF as trustworthy. He noted that in Slovakia the survey was organised by PAS, whose executive director, Kičina, is politically opposed to the social-democratic government.

“He is a politically motivated man, who from morning until evening does not do anything else but pound away at the social-democratic government,” Fico said at a press conference on September 4, as cited by TASR. “When such a person organises any survey and sends these figures somewhere further, then we cannot trust these figures.”

“It is not true that I am politically motivated,” Kičina told The Slovak Spectator. “I am not a member of any political party and PAS is by principle an apolitical business association, which has requested and will request from each government improvement of conditions for doing business.”

He recalled that not only PAS but also other business associations have criticised the current condition of the business environment in Slovakia. Kičina specified that PAS sent the questionnaire to 250 large and 250 small and medium-sized companies, randomly selected by a computer using WEF methodology.

The opposition believes that laws adopted by the current government played a major role in Slovakia’s worsening competitiveness. According to the opposition, competitiveness decreased due to badly set tax rates, labour legislation, large bureaucracy at offices and a high level of corruption.

“Today unemployment is growing, we have record debt and the worst thing is that the outlook for Slovakia is not better,” said Ivan Štefanec, the deputy chairman of the Slovak Democratic and Christian Union (SDKÚ), as cited by TASR.

HOW TO BE MORE ATTRACTIVE

While the government and the opposition talk about taxes and unemployment, there are other areas of conducting business that need to be taken into consideration where the business environment is concerned.

The basics that make Slovakia, or any country for that matter, an attractive destination for investors, are universal and do not change in space and time, according to analyst Vlachynský.

“A good-quality judiciary, so that investors don’t need to worry about their investments,”
Vlachynský listed. “Stable regulatory environment, so that the rules of the game for investors are not changing during half-time. The least amount of bureaucracy possible so that they can focus on creating value and not on conflicts with bureaucrats; and obviously as low taxes and payroll taxes as possible, so that they have more resources for investment and for wages for their employees.”