As the current budget period of EU funds (2007-2013) comes to an end it becomes increasingly clear how internal bureaucratic changes and other problems have left Slovakia unable to fully tap all the money at its disposal. With a new period ahead, questions about what went wrong need to be answered. Yet, being the first programming period, Slovakia was still learning how to draw EU funding. 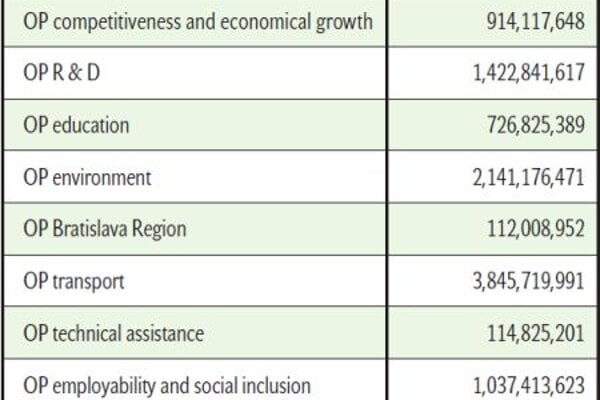 As the current budget period of EU funds (2007-2013) comes to an end it becomes increasingly clear how internal bureaucratic changes and other problems have left Slovakia unable to fully tap all the money at its disposal. With a new period ahead, questions about what went wrong need to be answered. Yet, being the first programming period, Slovakia was still learning how to draw EU funding.

This was Slovakia’s second budget cycle as an EU member state and 558 calls worth nearly €13 billion went out to prospective applicants for this money. At the same time 70 of them were cancelled, leaving 488 calls completed (€11 billion). This high number of cancelled tenders suggests that the system of EU funds distribution in Slovakia still has much room for improvement.

Of the more than €13.5 billion for approved projects, about €6.5 billion has been realised, or just 48 percent. A number of factors appeared to contribute. The programming period started in 2007, but the first calls for applicants were not published until more than a year later. The first government of Prime Minister Robert Fico modified the operational programmes put together by experts of the previous government led by Mikuláš Dzurinda, which caused prolonged negotiations with the EC and more delays.

In July 2010, Fico’s government cancelled the Ministry of Construction and Regional Development as the central coordinating body for Eurofunds and passed its duties to the Government Office. The government of Iveta Radičová transferred the responsibilities to the Ministry of Transport, Construction and Regional Development in January 2011. The early elections in 2012 brought another change and as of April 2013 Eurofund responsibilities were transferred once again to the Government Office.

With such bureaucratic delays, those applying for funds saw their investment plans expire. In some cases the evaluation period for some applications lasted more than a year, as opposed to the standard 100 days. There have been 23 amendments made to the public procurement act during the past seven years. In this unstable legislative environment many calls take too long and many applicants simply decide not to wait for approval, but to go ahead without any grant.

The most problematic areas in the drawing of funds are: education, transport, environment and information technology. These are also areas lacking the resources to solve their long-term problems.

As an example, the Ministry of Education has not been able to find the money to improve the conditions for schools and teachers as well as for the systematic changes in the educational system and now there is a serious risk of not utilising up to 30 percent of their allocated budget. The Ministry of Transport has 30 percent of unused funds allocated for building new highways. Then there is the Ministry of Environment. There are still many small villages which do not have access to quality drinking water or a proper public sewage system. In this area 20 percent of the funds are still unused and there is little chance they will be.

Information technology has probably been the biggest fiasco of all. The state has not been able to implement e-government policies while arguing that this is due to a lack of resources. This is simply not true, and a large proportion of this allocation will undoubtedly be squandered.

While major problems with the process remain, the numbers are not nearly as bad as they look. Some projects are still in the implementation process and will be finalised in the coming months or years, making the proportion of completed projects definitely higher than the current 48 percent. According to a report from the Ministry of Economy on the drawing of structural funds, the level of approved and contracted projects in total was 84.69 percent of the whole budget at the end of August 2013. There are still several calls in the evaluation process, meaning the final numbers of approved as well as implemented projects will still increase.

The European Commission has admitted in its evaluation of the implementation of the programmes of the regional and cohesion policy in all 28 member states of EU, that despite the long-term inflow of billions from Eurofunds, the EU faces a continuous increase of regional disparities even with the €818 billion spent to lessen disparities over the last 25 years.

This reveals that a lot of money has been spent inefficiently while Slovakia is not the only country which spends these funds in a less than optimal manner. The other side of the story suggests that a large portion of Eurofunds has wound up in good projects and optimally fulfilled its purpose.

The Lisbon Strategy was the main strategic document guiding member states up to 2010 and its goal was to change Europe into the most dynamic and competitive knowledge-based economy. Its goals were not fulfilled to satisfaction, which was taken into consideration when preparing the next strategic document, Europe 2020.

This treaty will be the key strategy in the period 2014-2020. The EU set five ambitious goals dealing with employment, innovation, education, social inclusion and climate and energy to be achieved by 2020. European Commission President José Manuel Barroso introduced the strategy, saying: “Europe 2020 is the EU’s growth strategy for the coming decade. In a changing world, we want the EU to become a smart, sustainable and inclusive economy. These three mutually reinforcing priorities should help the EU and the member states deliver high levels of employment, productivity and social cohesion.”

For Slovakia, it is important to begin to prepare now for the coming programming period, lest the country miss out on money, and potential improvements, in a way similar to the funding period now drawing to a close.

Lucia Solomon is the country manager of PNO SK