JANUARY 2013– As many as 927,000 cars were produced in 2012, which was the highest number in the 21-year history of Slovakia. Despite analysts' murky prognoses, the three Slovak carmakers believe that the decline of the European auto market will not slow their production and that they will go on to produce in 2013 even more cars than in the record-breaking year 2012. 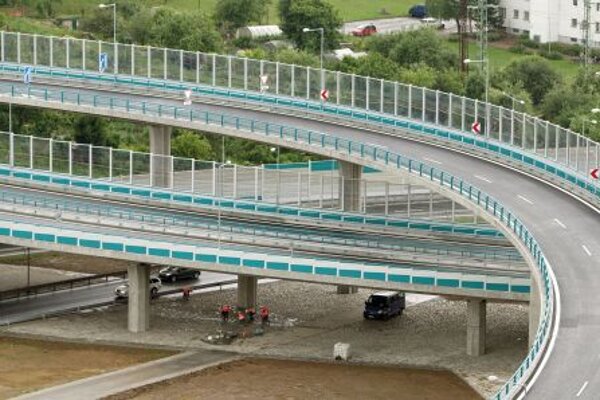 <>JANUARY 2013
– As many as 927,000 cars were produced in 2012, which was the highest number in the 21-year history of Slovakia. Despite analysts' murky prognoses, the three Slovak carmakers believe that the decline of the European auto market will not slow their production and that they will go on to produce in 2013 even more cars than in the record-breaking year 2012.

– A year of higher taxes and levies begins. An increase in taxes and levies came into effect in January. The government of Robert Fico plans to collect some half billion euros more in higher taxes and levies this year. This is one quarter of the consolidation package, the aim of which is to squeeze the deficit below 3 percent of GDP. PM Robert Fico told the Hospodárske Noviny daily that they had no other option, saying that the rightist parties would have chosen to increase prices and VAT. Firms had to prepare for the most radical changes after the ruling Smer party increased their income tax to 23 percent, hiked health insurance levies on income from dividends and increased taxes for high earners from managerial ranks.

– Enel confirms delay of Mochovce. One of the biggest investment projects in Slovakia will be delayed. The remaining two nuclear power units will be completed as late as 2014 and 2015. The state, which co-owns the power producer Slovenské Elektrárne with Enel, which is building the extension of the Mochovce NPP, will thus not see any dividends from the company until after 2015, while revenues from the sale of electricity generated by the new blocks will come later. Moreover, the construction of the new blocks will be more expensive. Slovenské Elektrárne still covers the costs from its own resources, without relying on any government funding or state assistance.

FEBRUARY 2013
– One of the biggest employers in Slovakia, Schaeffler, decides to build an R&D centre in Slovakia and create the Financial Centre of Shared Services for Europe. The group currently employs 8,100 people in its two production plants here. After the investment is completed it will create 200 more jobs. The German firm plans to invest €10-12 million euros.

– The shell of the new body shop for SUVs has already been erected at the Bratislava-based plant of car-manufacturer Volkswagen Slovakia. Worth €600 million, it is the biggest investment in the history of the company and also one of the biggest body shop construction projects in the automotive industry worldwide. It is set to provide jobs for around 550 people when completed.

– PM Fico is planning new public-private partnership projects (PPP) highways. Possible candidates for the two new PPPs are the bypass of Bratislava and the R7 dual carriageway in the south of Slovakia.

– New rules embedded in Slovakia’s revised tax legislation and modified Labour Code have lowered Slovakia’s appeal as an investment location, a survey conducted by seven foreign chambers of commerce in Slovakia suggests. Although Slovakia was not deemed the most attractive destination in central and eastern Europe in 2013, falling behind the Czech Republic, 81 percent of the 187 firms surveyed would still pick Slovakia as a destination for their investments.

MARCH 2013
– New centre of Bratislava Skyscrapers. Two recent projects will see three tall towers erected close to the Eurovea shopping centre: two built by J&T and one as an expansion of Eurovea. J&T Real Estate has already started selling flats in its two buildings, slated to be 108 metres tall. However, one of the Eurovea complex buildings is to be even taller, at 115 metres.

– U.S. Steel Corporation will not sell its U.S. Steel Košice (USSK) subsidiary in eastern Slovakia at present, after the government promised to help cut the firm’s energy and environmental bills. Representatives of the government and the US investor signed a memorandum – after negotiations started in November 2012 – on March 26 in Košice. The signing took place upon the prime minister’s return from a two-day trip to the headquarters of U.S. Steel in Pittsburgh, USA, accompanied by several ministers and local politicians.

– The state announces five highway tenders all at once, totalling €1.2 billion, which will involve the construction of stretches of several highways. The construction sector welcomed the news, but Igor Tóth of the Slovak Association of Consultancy Engineers expects that offering several big orders at the same time will reduce the number of firms participating in the tenders.

– An amendment to the Investment Assistance Act, signed by President Ivan Gašparovič on March 28, stipulates new conditions for companies to receive aid. According to this amendment, investors will have to guarantee the creation of new jobs equaling at least 10 percent of the average staff level over the past 12 months; the number of new employees cannot be lower than 40, and if they want to expand production, they must guarantee a production increase of 15 percent against its average over the past three years. The newly created jobs will also have to last for five years.

– Cars of the future will be made in Bratislava. German automaker Volkswagen will invest tens of millions of euros in the production of hybrid electric cars in Bratislava.

– According to documents approved by the Cabinet in March 2013, Economy Minister Tomáš Malatinský can begin talks about the sale of the state-owned stake in Slovak Telekom (ST).

– Foreign farmers own about 20 percent of Slovak land. The Agriculture Ministry plans to prevent foreign investors from buying land by making changes to the rules of purchasing agricultural land.

APRIL 2013
– The government prepares to make direct cash payments to companies which promise to create new jobs. The government is ready to pay €50 million in return for 13,000 new jobs, which comes in addition to indirect support and tax relief. Besides the state aid awarded to the German tyre-making firm Continental, which plans to generate 600 new jobs in Púchov, the companies Tatravagónka (committing to 350 jobs in Gelnica) will receive money. While Continental will be paid in the form of tax relief, Tatravagónka is set to receive direct cash payments.

MAY 2013
– PM Robert Fico discussed the potential arrival of carmaker Mitsubishi to Slovakia with Japanese Prime Minister Shinzo Abe; however he declined to give specific details before a memorandum is signed.

JUNE 2013
– A week after the Organisation for Economic Cooperation and Development (OECD) reduced its estimate for Slovakia’s gross domestic product (GDP) growth from 2 percent to 0.8 percent in late May, the International Monetary Fund (IMF) announced it was forecasting the country’s economy to grow by just 0.6 percent 2013.

– Slovakia is the best country in eastern Europe for attracting investments, according to Site Selection magazine and its “Global Best to Invest Report”. The list is based on announced projects, invested capital, the total number of established jobs and the number of new jobs per inhabitant.

– Parliament passes a law on major investments that will introduce new rules, including a change in the classification of significant investments. These will encompass a variety of projects in which the investment will reach at least €100 million.

JULY 2013
– The Slovak government approves investment assistance worth around €150 million to be granted to companies. Economy Minister Tomáš Malatinský wants to increase this sum by an additional €14 million, which is to be divided among four firms promising to create around 800 new jobs: IBM committed to hiring 150 IT specialists; Mobis, the supplier of the carmaker Kia, promised 190 new jobs; Dometic Slovakia, agreed to 326 new employees, and Miba Sinter Slovakia from Dolný Kubín, pledged an additional 120 people to their workforce.

– The company ContiTech, which produces technologies for improving the automotive industry, is expanding in Slovakia. The company’s €7.5 million investment will be split between a new production hall, R & S centre and new roads in the Upper Nitra region.

– The Japanese car-industry supplier, Akebono Brake Industry, announces plans to build a manufacturing facility producing automotive components in Trenčín. Based on unofficial reports, the company will invest between €20 million and €30 million and hire over 350 new personnel.

AUGUST 2013
– Auto parts supplier ZF Boge Elastmetall Slovakia sets its sights on Trnava, where it aims to build a new plant worth €3.5 million, creating more than 500 new jobs. The company has sent its project for an environmental impact assessment.

– Slovakia’s economy in Q2 2013 posts 0.9 percent growth year-on-year, thus keeping the country out of recession. Nevertheless, the growth is still too feeble to support the creation of new jobs, indicated by the 1.3 percent drop in employment when compared to Q2 2012.

– Spanish metallurgical company Fundería Condals announces plans to build a production plant near Prešov. Representatives of the city and the potential investor signed a memorandum of cooperation on August 21.

– Slovakia may be set to gain 700 new jobs. The companies Dometic, Miba Sinter, Johnson Controls, Gevorkyan and Michatek would invest a total of €41 million into their operations and with it create 700 new jobs, based on a plan approved by the government on August 28. The five investors will receive state aid worth €15 million, and most of the investment stimuli, €13.4 million, should come in the form of tax relief.

SEPTEMBER 2013
– The government is considering cuts to payroll taxes for employers who hire those registered with the labour offices as jobless for more than one year. The “payroll loan” should help companies cover payroll tax expenses in times of temporary economic hardship so that they are not forced to lay off employees.

– Slovnaft will invest millions in plastic production, as the company begins construction of a new unit for the production of polyethylene. The refinery plans to invest more than €300 million in this project in Bratislava.

OCTOBER 2013
– The government decides to grant investment stimuli worth a total of €6.66 million to two firms. IBM Slovakia is allocated €1.58 million for implementing an investment project, while T-Systems Slovakia is granted €5.08 million for expanding its IT centre in Košice.

– The Czech company Energetický a Průmyslový Holding (EPH) sells its share in the SPP parent company to the state while keeping its share in SPP distribúcia and Eustream.

– The financial group PPF led by Czech billionaire Petr Kellner is finishing the acquisition of the Slovak and Czech branches of the mobile operator Telefónica, which provides telecom services and internet connections under the brand O2.

– The state-run freight carrier Cargo is seeking investors for its subsidiaries. Investors from Germany, Switzerland and Ukraine have already indicated interest.

– One Fashion Outlet, the first of its kind in Slovakia, opens in Voderady near Trnava. It features 50 shops with various brands, while another 20 should open within the next six months.