The function suite of the Hotel Sheraton seemed to be filled with nothing but coffee. Its smell filled the air and it was the subject of every conversation among each of the groups of people, who were holding samples named like “crèma passion” in cardboard, “to-go” cups. 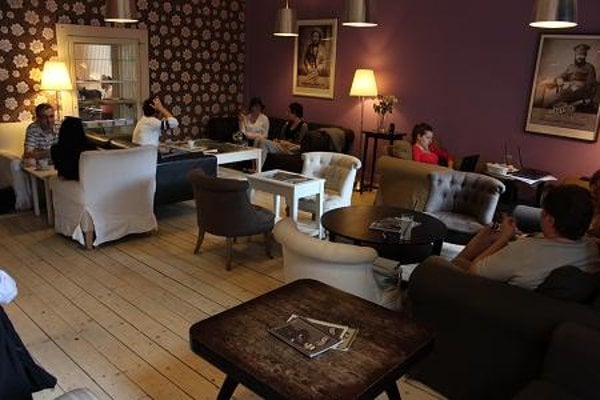 One of the most popular café chains is named after the leader of the Slovak national revival, or rather the English pronunciation of this name: “Shtoor” (Source: Bratislava City Guide)
Font size:A-|A+0

The function suite of the Hotel Sheraton seemed to be filled with nothing but coffee. Its smell filled the air and it was the subject of every conversation among each of the groups of people, who were holding samples named like “crèma passion” in cardboard, “to-go” cups.

This was the first “Coffee Fest” in Bratislava, where organisers had expected a small turnout of coffee afficionados but were instead inundated by hundreds of coffee fans, who came in their droves to enjoy professionally-prepared espresso, cappuccino or latte, and to prove that the global passion for the black stuff has made it to Slovakia.

“Slovaks have cared for the coffee quality much more since they started to travel all around the world,” said Slovakia’s leading coffee expert, Michal Šturc.

They also enjoy it in great quantity, at least if Coffee Fest was anything to go by.

The coffee phenomenon in Bratislava is best represented by the increasing number of coffee shops opening up across the city. But it is not only a modern thing as the city has a long, coffee-centred tradition. By 1918, Bratislava was considered by many to resemble a suburb of Vienna, from where it had acquired a trend for cosy coffee-houses. According to Imrich Sečanský’s book Memories and Professions of a Doctor, after the First World War, coffee houses became the kind of place where business contracts were signed, chess was played, artists and journalists met to gossip and exchange ideas. They moulded the soul of the city.

Only the communists could end the thriving sub-culture, and their fears of the intellectual classes resulted in the forced closure of all the famous coffee houses. Sečanský feared that the tradition would never return, but thanks to the opening of Europe’s borders, coffee started making a comeback in Bratislava.

These days, the city’s coffee shops offer significantly more than just the core product: they sell cakes, confectionery and alcoholic drinks, and are meeting places for students, tourists and office workers.

“Our cakes are some of the highlights of our menu,” said Ján Krekáň, the co-owner of Shtoor, a chain of four coffee shops in Bratislava, which are among the most popular establishments in the city. Inspired by the American coffee shops, Shtoor specialises in homemade cakes, lemonades and sandwiches.

The name “Shtoor” comes from the English pronunciation of Ľudovít Štúr, the leader of the Slovak national revival, and the man who codified the Slovak language. The first branch was located on Štúrova Street and then, owing to its popularity, further outlets opened on Panská Street, Obchodná Street and in Mlynská Dolina. Appropriately given the links to Štúr, the latter two branches are in bookshops owned by the Martinus chain.

“Once the owner of Martinus, Mišo Meško, came with his wife to our coffee house in Štúrova and said that they would like to open a big bookshop in Bratislava following the example of the co-operation between Starbucks and Barnes & Noble,” Krekáň said. “I liked this idea because coffee and books go together.”

La Putika is a similar chain of coffee shops, but with a slightly different character, drawing inspiration from French-style bistros. Two years after opening the first branch in Račianske Square, two more opened in Klobučnícka Street and Panská Street, with customers appreciating that the coffee shop “has soul”, according to the supervisor Gabika Horná.

The owners Patrik Holek and Dušan Novota filled their shops with stylish vintage furniture and decorations connected with coffee from the whole world.

“I like the whole atmosphere at La Putika,” said a 22-year-old customer named Peter. “You don’t have to be ashamed to get a beer or wine even though it’s not a pub.”

Indeed, La Putika is renowned for its selection of Belgian beers and wines from Slovakia and Chile. Its chic interior also appeals to students.

“I meet my schoolmates and friends from drama groups here,” said Dominika, 22, a student at Comenius University. “When people visit Bratislava and have no idea where to go, I definitely take them to Putika.”

For some, the coffee itself is of secondary importance, but for the real connoisseurs, it is all that matters.

Slovak taste-buds are gradually being refined after years of enforced abstinence from the highest quality flavours. During the communist period, Slovak people had no idea of the differences between types of coffee and got used to drinking a strong, dark Turkish-style coffee because it was the only one available in the Eastern Bloc.

According to Coffee Culture Academy, there are two main species of coffee beans: Robusta and Arabica. But most of Bratislava’s coffee shops offer blend coffee, which is a mixture of both. Shtoor also offers their own fair-trade coffee called “1843”, after the year in which Štúr first codified the language. Meanwhile La Putika serves Mauro coffee in two of its branches, and Bristot in another.