A VARIETY of events celebrated the 24th anniversary of the Velvet Revolution on November 17 as leaders in both Slovakia and the neighbouring Czech Republic sought to emphasise the need for passing the affiliated history on to future generations. 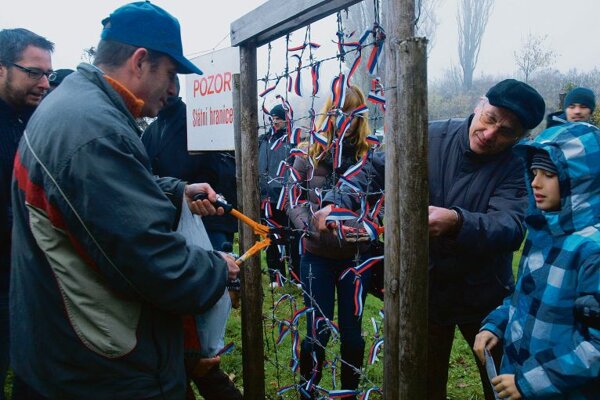 A VARIETY of events celebrated the 24th anniversary of the Velvet Revolution on November 17 as leaders in both Slovakia and the neighbouring Czech Republic sought to emphasise the need for passing the affiliated history on to future generations.

“Freedom and democracy are not the norm, freedom is a responsibility,” President Ivan Gašparovič said as he laid a wreath at a memorial honouring the victims of communism at Bratislava’s Vrakuňa cemetery.

As the holiday is commemorated in two countries, Slovakia and the Czech Republic, it also serves as the anniversary of two key dates in the history of a united Czechoslovakia. The first of these dates back to 1939. In Prague, on October 28 of that year, 100,000 people demonstrated against the Nazi occupation, clashes ensued and two people were killed, including medical student Jan Opletal. His funeral on November 15 saw yet another public expression of anger at the occupation. Two days later Nazi troops raided the Hlávka dormitory where Opletal had lived, arresting and executing students before closing universities. In 1941, the London-based Czechoslovak government in exile was instrumental in having that date declared International Students Day.

Fifty years after the brutal Nazi raid, November 17 would again see a totalitarian regime target students as a march in central Prague was broken up by police – this time from the communist regime. That violence would appal much of the country and lead to additional demonstrations. As they grew in size and scope, while spreading throughout the country in the forthcoming weeks, the movement would spur the peaceful overthrow of the communist regime.

“In 1989 and 1939 students played an indispensable role,” Prime Minister Robert Fico said, speaking at a lunch he hosted with university students on November 17.

While many used the anniversary as a day of reflection, opposition parties that have grouped themselves under the People’s Platform umbrella organised their own commemoration events at the National Theatre and some sought to use it as opportunity to score political points.

“[Fico’s government] is bringing back to public and private lives a feeling from which society was liberated on November 17, 1989,” the TASR newswire quoted from a statement put out by the Freedom and Solidarity party. “It’s a feeling of fear of freedom and fear of expressing one’s opinions freely.”

Across the border in Prague, dignitaries laid wreaths and flowers at a memorial on Národní Street in central Prague, near where the worst of the police-on-student violence took place in 1989. A separate event took place at the Hlávka dormitory, where Czech caretaker Prime Minister Jiří Rusnok spoke on behalf of President Miloš Zeman, who is recovering from a knee injury.

“Our duty is to transmit the message on and also to the generations that were born in what was already freedom and did not endure the tough tests of the past,” he said. “Only in this way can we preserve our own freedom.”

Back in Bratislava the message was similar.

“The revolution did not come all by itself,” Defence Minister Martin Glváč told the Hospodárske Noviny daily. “It’s good that November 17 is a public holiday, so that the future generations know what happened, what life was like here and appreciate more what we have here today.”