WHILE SLOVAKIA had adopted a three-pillar pension scheme in 2005, including a second pillar based on private pension funds, there has been a lack of details on how those private pillar pensions will pay out beginning in 2015 – until now. 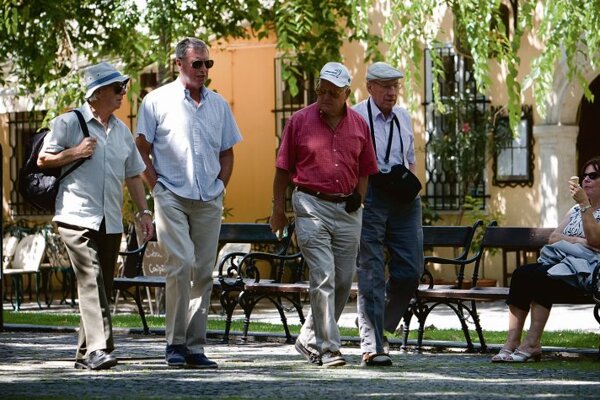 Payment of pensions from the second pillar is closer. (Source: SITA)
Font size:A-|A+0

WHILE SLOVAKIA had adopted a three-pillar pension scheme in 2005, including a second pillar based on private pension funds, there has been a lack of details on how those private pillar pensions will pay out beginning in 2015 – until now.

“When an [eligible] person applies for the old-age pension, they will come to a specific pension fund management company and apply for the pension from the second pillar,” Jozef Burian, the state secretary of the Labour Ministry, said when introducing the draft legislation. “The company will send this information into the central electronic offer system to be administered by the social security provider Sociálna Poisťovňa. The latter will submit the sum, which the applicant has saved in the second pillar, to commercial insurance companies, which will then submit their concrete offers [of the life-long pension].”

The shift to a privatised second pillar came in an attempt to minimise the effects of an aging population, and thus the need to pay out more pensions with fewer workers contributing to it, on the state budget.

The currently valid law on old-age pension savings does not solve or only partially solves issues of the process for applying for pensions from the second pillar and submitting offers for payment by pension fund management companies and insurance companies. Other issues which are not fully addressed are the relationship between the provider of the pension and the saver as well as some technical issues. Moreover, the current legal norm is in some aspects outdone and thus it actually cannot be fulfilled, Veronika Husárová from Labour Ministry told The Slovak Spectator.

The condition for the payment of saved funds via programme withdrawal is that the pensioner is entitled to receive the old-age pension from the first, pay-as-you-go, pillar exceeding four-fold of subsistence minimum or to receive a combined pension from the first and second pillar exceeding this level. For now, that amounts to about €800. Such a pensioner will be able to ask for the monthly payment up to the subsistence level or agree upon the period during which the saved money would be paid out to him or her, with the shortest payment period at 10 years.

Pensioners who are unable to obtain a life-long pension from any insurer due to insufficient savings can buy a temporary pension or receive money paid out under the programme withdrawal.

Husárová explained that while life-long and temporary pensions are insurance products, the programme withdrawal is not, as the money saved will continue to be administered by the pension fund management companies and thus can also be inherited should the pensioner die.

The Slovak Insurance Association (SLASPO) views the proposed scheme as standard and one which is also used in countries where a private pillar already exists, including Chile, the UK and Estonia.

However, it views the proposal as rather complicated. Miroslav Čamek, life insurance manager with SLASPO, told The Slovak Spectator that in the case of the life-long pension there will be six variants of this product, as well as three variants for the temporary pension and three variants for programme withdrawal. Thus the whole system will be administratively demanding. Moreover, the effectiveness during the first five to 10 years is questionable with respect to the small volume of money thus far saved in the private pillar.

“On the other hand, we understand that we are in the sphere of social security, that life situations of individual savers may be significantly different and thus it is not possible to find one regime which would suit each situation,” said Čamek.

Reactions from the industry

Pension fund management companies see the draft of the annuity revision as a sensible compromise under the current circumstances, while Stanislav Žofčák, chairman of the board of the Association of Pension Funds Management Companies (ADSS), told The Slovak Spectator that “of course, it would be possible to polemicise some parameters, but in the end it is the ministry which is submitting this draft bill”.

Žofčák sees the troubling parameters as technical in character and hopes that they will be ironed out during the legislative approval process. But he expects that the four-fold of the subsistence minimum, the level at which it is possible to ask for the programme withdrawal, would invoke a strong discussion, which has actually started.

“The possibility of the programme withdrawal was a strong motivation [for people] to enter the second pillar,” said Žofčák. “Savers should not be left disappointed. On the other hand it is necessary to say that the main motive of saving in the second pillar is savings for the retirement paid out in as long of a period of time as possible.”

With respect to the change of the condition for the programme withdrawal, Čamek said that it is not true that the draft revision significantly changes the rules of the game. He specified that the current version of the law also enables only people who acquire a minimal life-long pension of 0.6 times the subsistence minimum, about €120 per month, to ask for payment of a portion of money they had saved in the second pillar. This means that based on the rules so far, only people who have saved €20,000-€25,000 in their accounts in the second pillar would be eligible for withdrawing saved money and could withdraw only money exceeding this level. According to the new proposal, all those whose life-long pensions from both pillars exceed the four-fold subsistence level can apply for programme withdrawal.

“At first sight this means tightening [of the conditions], but in practice significantly more people will get this possibility [to withdraw saved money]; also those who have saved about €10,000 or even less, given they have a pension from the first pillar [that is] high enough,” said Čamek. “Moreover, a portion of these people would be able to use for the programme withdrawal their whole savings and not only a portion, as it was so far.”

He agrees that most savers would have only one option - to buy a life-long pension - but he sees nothing strange in using money saved for tens of years for retirement for purchasing the pension and not for one-off spending.

Radovan Ďurana, an analyst with the Institute of Economic and Social Studies (INESS), considers adoption of the annuity revision to be necessary as it clarifies many important aspects of the payment scheme of pensions, but is critical about some changes that the new legislation brings, citing limitations on how people are free to manage their own money.

“The bill enables savers to get to their savings only when their pension is €200 higher than the current gross average wage, and only gradually and in small amounts,” Ďurana told The Slovak Spectator, adding that when deciding whether a saver is entitled to withdraw saved money, any other saving schemes, like private savings or a pension from the third, supplementary pillar, are not taken into consideration.

Ďurana sees the level of €800 as discriminatory toward people with higher incomes.

“They have to pay a lot [within the social insurance scheme], their old-age pensions from the first pillar are being cut and they can get to savings only via life-long pensions,” said Ďurana.
Other changes

However, since to the short time since the launch of the second pillar, the first pensions will be low. The average monthly pension will be €23.40 as the average sum people saved in the second pillar during the first 10 years will be €4,000, the daily Hospodárske noviny wrote. Those, who saved in the second pillar for the full 10 years, will receive a monthly pension payment from the private pillar of about €45.90, while also likely receiving a pension from the savings they also paid into the traditional public scheme. The current average old-age pension is €390 per month.