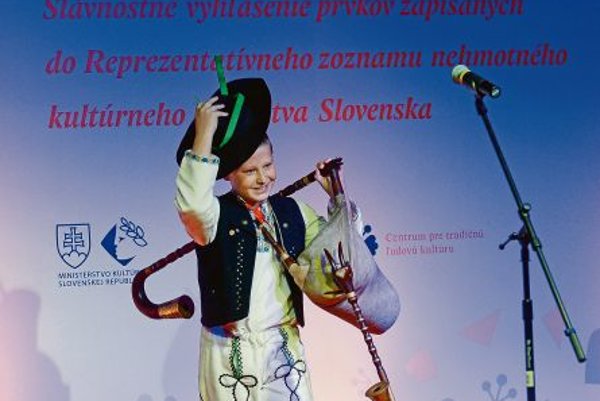 SLOVAK bagpipes, puppet theatre, ornaments on wooden houses in Čičmany village and traditional Salamander parade in Banská Štiavnica have all been added to a list of key national cultural treasures, even as the administration of the list itself remains a political battleground.

The Culture Ministry added all four to the Representative List of the Intangible Cultural Heritage of Slovakia on October 24. The list already includes Terchová village folk music; the musical instrument fujara, which is a shepherd’s long pipe; Radvaň fairs taking place since 1655 in Radvaň village which is now part of Banská Bystrica and the Aušus services of the Špania Valley, the ceremony of local miners.

“This intangible [heritage] is fading away since it is often unseen,” Culture Minister Marek Maďarič said, as quoted by public broadcaster RTVS. “Therefore it is very important to reflect it and the best things put in such list.”

The contract for digitalisation of that list has led to a war of words between the government and the political opposition. Former Culture Minister Daniel Krajcer of New Majority - Agreement - NOVA party and current Culture Minister Marek Maďarič of now ruling Smer party have clashed over the issue. The €217 million project, funded by the EU through 2015, focuses on preserving Slovakia’s cultural heritage, including historical books, paintings and statues.

The day before parliamentary elections in 2010, Maďarič, who was also culture minister at the time, signed a €170 million contract with Tender Media Group (TMG). After a centre-right coalition won elections Krajcer became minister and cancelled the contract claiming he wants to divide the offer into several smaller parts. However, Smer then won next elections in 2012 and Maďarič renewed the contract, Sme daily reported in July.

Krajcer with Jozef Viskupič from Ordinary People and Independent Personalities (OĽaNO) party filed a criminal complaint against Maďarič in April.

“The whole project of culture heritage digitalisation is endangered not just because of delay,” Krajcer told to Pravda daily in April, “but because of scandalous renewing of a lawfully cancelled contract with a private consortium.”

However, cancelling of contract was unlawful since notice of cancellation should be delivered to TMG managing director who has not received it, TMG spokeswoman Sylivia Majerníková said, as quoted by Pravda. Maďarič said he has no copy of any such document, but Krajcer showed what he says was a cancellation order to the media. Maďarič then filed a criminal complaint against unknown person who stolen the original notice in April, according to Pravda.

Joining the list is a bottom up effort and is designed to recognise the most active keepers of traditions in Slovakia, Culture Ministry spokesman Jozef Bednár told The Slovak Spectator. Being on the list is one of the conditions for entering the Representative List of the Intangible Cultural Heritage of Humanity managed by UNESCO. Terchová folk music and the Radvaň fairs are waiting for UNESCO’s approval to be on that list.

“Entry of [culture] element on Representative List of the Intangible Cultural Heritage of Humanity means approving of its uniqueness and importance by world class professional community,” Bednár said. “It means the important form of culture representation abroad for every country.”

It takes time, work and enthusiastic people to make it in Representative List of the Intangible Cultural Heritage of Slovakia, Juraj Dufek, the second guild master of Guild of Slovak Bagpipers (CSG) told The Slovak Spectator. Bagpipe culture has been vanishing in Slovakia but during the last 30 years it has gained a new life as young people took an increased interest, he said.

“When you say bagpipes, the most people’s first question is whether those are Scottish bagpipes,” Dufek said. “Few people realise that we have several types of Slovak bagpipes and related music; there are even specific dances related to them.”

Most of songs for bagpipes are cheerful and dedicated to dancing, Dufek said. Bagpipes in Slovak folklore do not have military function as they have in other countries, but are more celebratory.

“Slovak bagpipe culture is very rich and interesting therefore it deserves to be appraised in such way,” Dufek said.

More than 250 years ago, locals in Čičmany village began decorating the exteriors of their wooden homes with various artworks. First lime varnish was applied to protect the wooden beams from humidity and natural decay; later, villagers started to add various motifs to them. Those decorations remain preserved until the present and since there are no similar ornaments in Slovakia or Central Europe, this part of the village was in 1977 declared a historic architecture reservation, Čičmany Major Natália Dubnicayová told The Slovak Spectator.

The inspiration for the designs comes from patterns embroidered into local folk costume. Even sportsmen participating on the 2012 Summer Olympics in London and 2014 Winter Olympics in Sochi had those ornaments on their uniforms, Dubnicayová said.

“Entry of Čičmany ornaments [on the cultural heritage list] is a matter of huge prestige for Čičmany,” Dubnicayová said, “but at the same time it is the commitment to preserve purity and uniqueness of our ornaments for next generations so everybody will know what Čičmany ornaments are.”

Banská Štiavnica’s Salamander Days has grown from a low key festival marking the beginning of the school year for students at the mining academy, to a big town festival including music, theatre, programmes for children, exhibitions, traditional markets, a festive mass and – the culmination – a parade through the town, featuring the salamander, the town symbol.

From 400 to 450 people participate on the parade playing various historical situations and characters including a mythological shepherd with the salamander. Usually, from between 5,000 and 7,000 people attend every year, Banská Štiavnica Mayor Nadežda Babiaková told The Slovak Spectator.

“It is a sort of celebration of the city and its mining history, academic traditions and spiritual heritage,” Babiaková said.

Since the 1993 Salamander Days takes place annually in the second September week at various sites in Banská Štiavnica. Some events are free to the public and others are invitation only.

Puppetry at the art of nomads

Traditional puppet theatre also gained recognition for its contribution to Slovak cultural heritage. The first historical documents mentioning puppetry in Slovakia come from 17th and 18th century. Thanks to nomadic life of actors the puppetry spread around the whole Slovak territory until the end of 19th century. Naturally, with rising popularity of puppet theatre the number of workshops focused on puppet-making increased as well, according to the webpage of Centre for Traditional Folk Culture, the state-based culture organisation which nominated puppetry to the list.

Puppetry came from other European countries, however was adapted for Slovak linguistic and thematic features. Slovak culture affected typology of characters and their visual appearance.

Thanks to the political decisions in 1950s traditional puppetry almost disappeared, however several puppetry families have preserved it, Puppet Theatre on Cross-Road Director Iveta Škripková told The Slovak Spectator.

“Original puppets and marionette theatres are perfectly invented with deep knowledge therefore traditional puppetry deserves to be in that list for sure,” Škripková said. “Finally, it is getting its deserved attention.”

FIVE Slovak cultural landmarks and two natural places have entered the UNESCO World Heritage List thus far. That list includes 981 properties forming part of the cultural and natural heritage, which the World Heritage Committee considers as having outstanding universal value. These include 759 cultural, 193 natural and 29 mixed properties in 160 countries.

Historic Town Banská Štiavnica and the Technical Monuments in its Vicinity - Banská Štiavnica is the oldest mining town in Slovakia. The old medieval mining centre grew into a town with Renaissance palaces, 16th-century churches, elegant squares and castles. The urban centre blends into the surrounding landscape, which contains vital relics of the mining and metallurgical activities of the past.

Levoča, Spišský Hrad and the Associated Cultural Monuments - Spišský Hrad has one of the largest ensembles of 13th and 14th century military, political and religious buildings in eastern Europe. The extended site features the addition of the historic town-centre of Levoča founded in the 13th and 14th centuries within fortifications. The site includes the 14th century church of St James with its 10 altars from the 15th and 16th centuries including an 18.6-metre high altar-piece completed around 1510 by Master Paul.

Vlkolínec - Vlkolínec, situated in the centre of Slovakia, is a remarkably intact settlement of 45 buildings with the traditional features of a central European village. It is the region’s most complete group of these kinds of traditional log houses, often found in mountainous areas.

Bardejov Town Conservation Reserve - Bardejov is a small but exceptionally complete and well-preserved example of a fortified medieval town, which typifies the urbanisation in this region.
Wooden Churches of the Slovak part of the Carpathian Mountain Area - The churches consist of two Roman Catholic, three Protestant and three Greek Orthodox churches built between the 16th and 18th centuries. The property presents good examples of a rich local tradition of religious architecture, marked by the meeting of Latin and Byzantine cultures.

Caves of Aggtelek Karst and Slovak Karst - The variety of formations and the fact that they are concentrated in a restricted area means that the 712 caves make up a typical temperate-zone karstic system. Because they display an extremely rare combination of tropical and glacial climatic effects, they make it possible to study geological history over tens of millions of years.