Enjoy a winter in Slovakia

The winter season is approaching and ski resorts have been busy preparing for it ever since the last one ended. The most intense work was seen in Slovakia’s biggest and most visited skiing destinations in Jasná and the High Tatras. In Jasná, work to connect the northern and southern part of the Chopok peak continues. 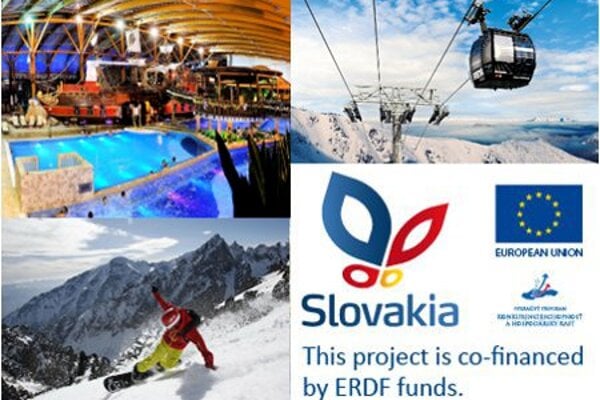 The winter season is approaching and ski resorts have been busy preparing for it ever since the last one ended. The most intense work was seen in Slovakia’s biggest and most visited skiing destinations in Jasná and the High Tatras. In Jasná, work to connect the northern and southern part of the Chopok peak continues.

The regions of Liptov and Upper Hron (Horehronie) were already connected by funiculars and cable cars last year. However, other construction projects are underway this year, and the roofed cross-connection of both cable cars has been added. At the top station at Chopok, work on the Rotunda café is wrapping up. After it is completed, visitors will find a restaurant there with space to accommodate 100 diners, as wella as a café and a unique, sunny terrace with 200 places on the roof. One innovation is the possibility of accommodation. In Jasná, a new cable car to the blue ski-slope Turistická is also being prepared for this season. The resort’s visitors can also use a new service enabling them to buy a ski pass via the internet, which can reduce waiting times at the ski slopes.

Busy construction activity was also observed this summer in Tatranská Lomnica. In mid October, the operation of the cable car from the Štart station to Skalnaté Pleso ceased. In its place, a high-capacity 15-seat cable car capable of operating in higher wind speeds will start transporting skiers as of the beginning of this season. New ski runs will be added, too: a red one for more advanced skiers, called Esíčko, and a blue one with artificial snow, called Buková hora Západ. In total, the skiing terrain will be enhanced with two kilometres of ski runs in Tatranská Lomnica.

At Štrbské Pleso a 2km blue ski run will be added for skiers in winter, called Turistická. This season, skiers in the High Tatras can enjoy a total of 24 kilometres of ski trails. Also, the joint Slovakia Super Ski pass - valid in the resorts of Jasná, the High Tatras, Donovaly, Veľká Rača, Malinô Brdo, Vrátna as well as the Tatralandia water park – will make skiing easier.

The Roháče-Spálená ski resort has prepared a new park for snowboarders. Accessibility will be improved by single-line traffic. In addition to snow, the resort will also be covered by a Wi-Fi signal, allowing visitors to plan their evenings directly on the slopes, or to find good restaurants or relaxation sites in the vicinity.

At Donovaly, ski passes were also prepared for beginners. They have a time credit for 8 hours and it is up to the skiers when they use it. One hour is deducted from the credit for the first entry through the turnstile, leaving seven hours for the rest of the season. Joint contactless ski passes have also been prepared by the ski resorts at Pezinská Baba and Zochova Chata; and at Pezinská Baba you can park for free this winter.

Visitors can replenish their energy at several water parks in close proximity to the ski resorts. High Tatras skiers with the Tatra Card will be transported between ski resorts for free by a ski bus, which will also take them to the Poprad-based water park. Liptov winter resorts and water parks will be connected via the Ski & Aqua Bus, which will shuttle all owners of valid ski passes and of the Liptov regional card for free between December 26 and April 21. Bus lines will connect the water park near Liptovský Mikuláš with the ski resort in Jasná, as well as Lúčky spa with Hrabov, and Lúčky with Jasná. The newly added ski bus between Demänová and Jasná will simplify transport to the ski resort. In addition to this, skiers can also relax in Liptov and refresh their energy in the Bešeňová water park. Visitors of ski resorts in Orava will be welcomed at the Oravice water park.

Slovakia offers an interesting combination of sub-Alpine skiing with the possibility of perfect relaxation. You do not have to spend a long time travelling from the slopes to relax in the water parks, which is another advantage. Winter innovations can also be found, with continuous updates, on the website www.slovakia.travel.