THE UNEXPECTED became reality when inhabitants of Banská Bystrica Region, in the heart of Slovakia, elected a far-right extremist to be their regional governor. 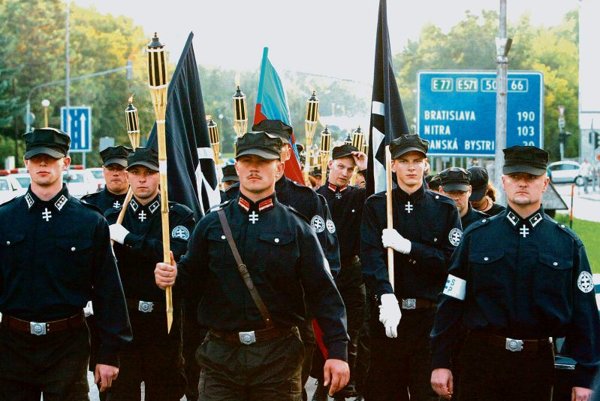 THE UNEXPECTED became reality when inhabitants of Banská Bystrica Region, in the heart of Slovakia, elected a far-right extremist to be their regional governor.

That does not automatically mean Marian Kotleba has won the hearts of most of those who live in the region, given that less than one quarter of all eligible voters turned up to vote on November 23. But the fact remains that Kotleba received over 70,000 votes in the run-off against the incumbent governor, Smer deputy chairman and MEP Vladimír Maňka, compared with the approximately 26,000 votes he garnered two weeks earlier in the first round.

Observers, most of whom were quite certain that Kotleba stood no chance of getting elected, see several reasons as to why their predictions were wrong. Among them is the inability of the governments to tackle the problems of Roma settlements, the continuous failure of the authorities to deal with serious hate crimes, and a tendency among mainstream politicians to support nationalism.

Mainstream political parties were quick to blame each other for Kotleba’s victory. Observers agree that it is not individuals and parties, but all politicians across the Slovak political scene, who carry some share of responsibility for this development.

In the past 20 years mainstream politicians have not shied away from views, especially towards the Roma, which conflict with human rights standards, Elena Gallová Kriglerová, from the Centre for the Research of Ethnicity and Culture (CVEK), told The Slovak Spectator.

“The measures they proposed or passed were often very radical, trying to punish people for their situation rather than trying to solve their problems in a participative way,” she explained.
All politicians have underestimated the situation, said Kálmán Petőcz, head of the Helsinki Committee for Human Rights and former government’s high official.

“Many politicians don’t realise that extremism starts where a politician suggests that not all people are equal,” Petőcz told The Slovak Spectator. “And many Slovak politicians do suggest this, so they are to be blamed. Mr prime minister is also to be blamed, since he does this very often, too.”

Petőcz also mentioned the absence of systematic education about human rights in Slovakia, despite the fact that Slovakia has committed itself to providing such education in numerous international treaties.

“Young people, students, are often confused about many issues and a big part of the youth tends to lean toward intolerant attitudes,” Petőcz said.

State not tough enough on extremism

Experts who have been studying extremism agree that in Slovakia there is potential for the support of extremist ideas and groups. Two thirds of the country’s population agree with some ideas presented by representatives of extremist groups, a 2012 CVEK study on political extremism in public opinion showed.

“At that time we said that in the event that social tension starts rising, or the situation of the people deteriorates too much, these people will tend to lean toward rightist extremists in elections too,” Gallová Kriglerová told The Slovak Spectator. “And that is what happened now. The number might not be too high, but previously Kotleba had very low support, around 1 percent, in parliamentary elections, but the potential of rightist extremism in Slovakia proves to be rather strong. So what happened now is that the time has come when it surfaced.”

Wider support for extremist ideas is also due to the state’s continuous failure in fighting extremism.

“The state has not stopped viewing extremism as neo-Nazism,” Irena Bihariová, the head of the NGO People Against Racism, told The Slovak Spectator. The police have boasted of crime statistics showing that a higher number of extremist crimes have been identified, but the identified crimes are merely related to the support and promotion of extremist movements, such as people wearing T-shirts with banned symbols.

“The police are focusing on expressions of extremism that we had here in the 1990s, and meanwhile some groups [have since become] cautious about not being associated with such symbols,” Bihariová told The Slovak Spectator, adding that extremists are now trying to cultivate an image that will appeal to the broader public, as their political ambitions have grown. The police do not take these groups into consideration, according to Bihariová, and that is where they have failed in tackling extremism.

Political future for Kotleba ahead?

Observers agree that for Kotleba and his party, his newly won position signifies more than just an election success.

Political analyst Miroslav Kusý believes it is dangerous because Kotleba will be at the centre of media attention and “negative promotion is still promotion”.

“He will be getting it for free now all through his election term, with the media focusing on him and reporting about him,” Kusý told The Slovak Spectator.

Gallová Kriglerová noted that Kotleba’s position will open the public discourse up to him and his party allies.

Oľga Gyárfášová, a senior research fellow with the Institute for Public Affairs (IVO), calls it a big boost for Kotleba for the future. The formations that Kotleba’s party were founded on in the past were banned due to their promotion of extremism, intolerance and fascism.

“Now they are becoming part of the political map of Slovakia, although only at the regional level for now,” Gyarfášová told The Slovak Spectator. Kotleba now finds himself in a completely new situation and he might still disappoint his voters, as it is always easier to “solve” problems with rhetoric and slogans rather than actions.

The response of the mainstream

Observers have unanimously called on politicians to start taking seriously the problems of Roma in socially excluded communities, and to come up with effective solutions rather than the repressive measures that have been in fashion over the past 20 years.

Kusý expressed some optimism that politicians will start paying more attention to Roma issues.
“It is a challenge not only for the ruling Smer, but also for the opposition parties,” Kusý said, adding that the opposition could take it as an opportunity to compete with the ruling politicians in proposing more effective solutions.

But Gallová Kriglerová is less optimistic about how mainstream politicians will react.

“This is a big concern, and it is not only mine,” she said. “It might be the case that politicians will see this is something that voters respond to, and it might be that they will start using this rhetoric to win over voters. They were doing this in the past, after all, but not so openly.”