Rising extremism not exclusive to Slovakia

AN EXTREMIST with a history of leading an openly neo-Nazi group in a high public office is an unprecedented event in Slovakia’s post-1993 history. The election victory of Marian Kotleba has caused an outcry among politicians, observers of the Slovak political scene, human rights advocates and even ordinary folks. Yet, his success can be seen as part of a growing trend beyond Slovakia’s borders. 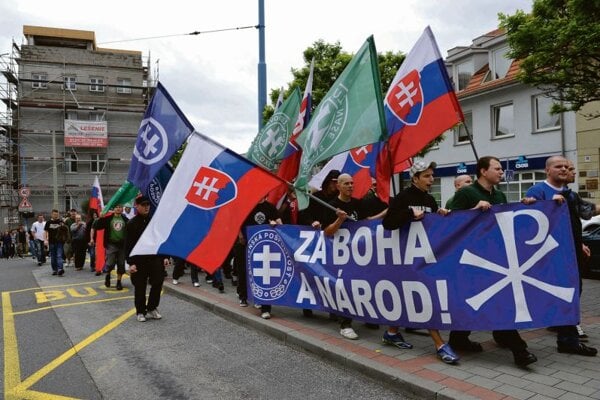 AN EXTREMIST with a history of leading an openly neo-Nazi group in a high public office is an unprecedented event in Slovakia’s post-1993 history. The election victory of Marian Kotleba has caused an outcry among politicians, observers of the Slovak political scene, human rights advocates and even ordinary folks. Yet, his success can be seen as part of a growing trend beyond Slovakia’s borders.

Support for extremist ideas and movements is on the rise in Europe. Parties with extremist views that have made it into mainstream politics can be found in Hungary, Austria, Greece, the UK, the Scandinavian countries, France, Italy and even the traditionally liberal Netherlands.

France’s Front National of Marine Le Pen, which is set to gain over 20 percent of the vote in the 2014 European elections, is now working with Austria’s Freedom Party, the Sweden Democrats, the Vlaams Belang in Belgium and the Party of Freedom of Geert Wilders in the Netherlands, to create an anti-European Union bloc in the new EU parliament in 2014, according to Bloomberg.com.

While in western Europe most of these forces are campaigning on negative views towards immigration, Islam and the EU, in Slovakia (and neighbouring Hungary and the Czech Republic), extremists are navigating the tide of anti-Roma sentiment.

Observers agree this has been caused in part by the economic crisis. As for Slovakia’s neighbours, in the Czech Republic extremism has yet to make much of a presence in politics, but it has emerged in various public gatherings, marches and demonstrations. In Hungary extremism has made considerable headway compared to Slovakia, since the far-right extremist party Jobbik has had seats in parliament since April 2010, noted Elena Gallová Kriglerová from the Centre of Research of Ethnicity and Culture (CVEK).

In fact, Jobbik, much like Kotleba, first gained power at the municipal and regional level, only to go further and succeed in the national and even European elections.

While this seemed a rather far-fetched parallel only weeks ago, now observers admit there are concerns that Slovakia might go the way of Hungary as well.

“Before this happened I was rather cautious because I did not think it could have gone this far,” Gallová Kriglerová told The Slovak Spectator. “But in this moment I think that the potential is really strong. It is a strong precedent even for Marian Kotleba and his party.”

Kálmán Petőcz of the Helsinki Committee for Human Rights draws comparisons with Jobbik too. They are alike not just in their racist views, but also in the way they built up their whole message on absolute populism in the totalitarian sense.

Kotleba rejects the entire political establishment, accusing all political parties for the bad things that have happened in the country over the last 20 years, including poverty, a lack of perspective, the problematic coexistence with Roma, Petőcz said.

“These are all things that Jobbik talks about as well,” he told The Slovak Spectator.
The parallels with Jobbik can also be found in the way that Kotleba has somewhat toned down his speeches so as to appear more mainstream.

While for the moment Kotleba has power only in Banská Bystrica Region, Gallová Kriglerová sees potential for extremists to gain support in the whole country, and across society, even among people with higher education, people with decent jobs, people who do not find themselves in a serious social situation.