THE ČADCA District Court has upheld the original verdict for Ján Slota, former chair of the Slovak National Party (SNS), punishing him with a €5,000 fine and a 16-month ban from driving. If Slota fails to pay the sum, he could spend three months in prison. 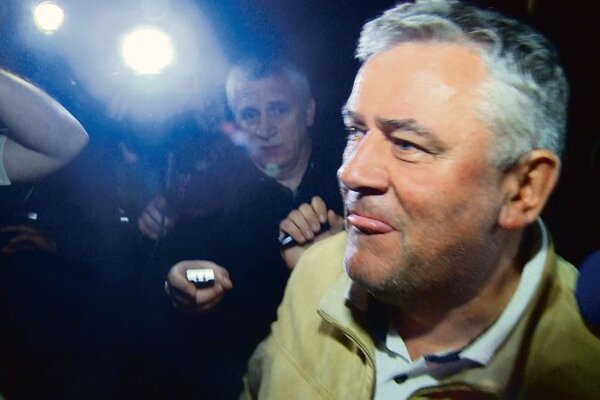 THE ČADCA District Court has upheld the original verdict for Ján Slota, former chair of the Slovak National Party (SNS), punishing him with a €5,000 fine and a 16-month ban from driving. If Slota fails to pay the sum, he could spend three months in prison.

The verdict is not yet valid, as either of the two sides can appeal, the SITA newswire reported on November 26.

In mid-September, the court sentenced Slota to a fine of €5,000 and a ban on driving for 16 months, avoiding a more serious sentence. Yet, the prosecutor appealed the original verdict, asking for a €5,000 fine and 24-month ban from driving.

The prosecutor argued that Slota is not a disciplined driver, since only recently he committed six minor offences on the roads, all involving speeding.

The police detained Slota on May 9 in Čadca after attempting to flee traffic officers. After refusing to submit to a breathalyser test or provide a blood sample, he was automatically deemed to have a blood-alcohol level above 1 part per thousand (and thus liable for criminal prosecution), and was placed in custody, the Sme daily wrote.

“[Slota] displayed evident indications of drunkenness,” a police officer who preferred to remain anonymous told Sme after Slota was detained.

However, for reasons that remain unclear, Slota was released only a few hours after his arrest and as a result avoided the super-fast-tracked proceeding typically used in such cases, Sme reported on its website on May 10.

According to the Slovak Criminal Code, this proceeding can be used if the police catch a suspect while engaged in a criminal act and the potential punishment does not exceed five years in prison. The process usually lasts 48 hours from the time the police start investigating to the time charges are laid. Officers can subsequently organise a hearing and secure evidence necessary for the prosecutor to pursue a criminal case.

Slota was first spotted by police officers, who believed him to be drunk and called the state police after seeing him get into a car. He was detained, but released soon after. The officers who released him were reprimanded by the regional police head.

Slota’s attorney Tatiana Polková claimed that Slota first wanted to take the breathalyser test, but refused it after he noticed that the police officers were recording it on a video, and was worried that they could sell the video, Sme reported. Polková also claimed the state did not prove that taking a blood sample would not harm Slota’s health.

The judge partially acknowledged her arguments, according to Sme, and suggested Slota might sue the police if he feels his honour suffered from the way the police treated him.

When delivering the verdict, the judge said that Slota obviously was not sober and that he is not an ideal driver, Sme reported.

Slota, whose behaviour while intoxicated has been widely reported on in the past, chaired the SNS when the party was a member of the first government of Robert Fico in 2006-2010 and served that term as an MP. He was stripped of his party membership in April 2013 due to alleged misuse of party property.