AS CHRISTMAS approaches, many Slovaks experience an adrenaline rush as they fret over what to buy for their families and friends and how to pay for it. The Christmas rush has become an inevitable part of the pre-holiday period in Slovakia, and even though the season starts in November for brick-and-mortar stores, many Slovaks leave their shopping - increasingly done online - until the last minute. 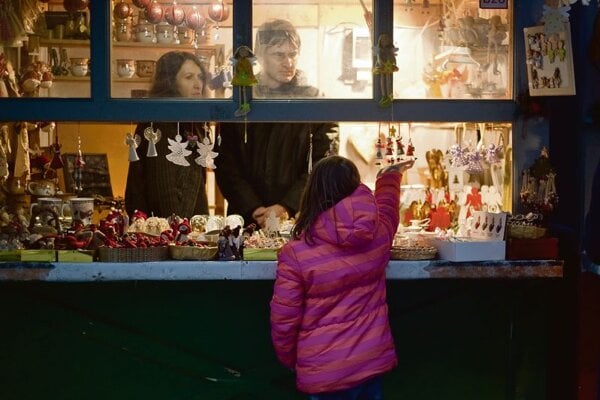 This year consumers are expected to behave much as they did in 2012. (Source: SME)
Font size:A-|A+0

AS CHRISTMAS approaches, many Slovaks experience an adrenaline rush as they fret over what to buy for their families and friends and how to pay for it. The Christmas rush has become an inevitable part of the pre-holiday period in Slovakia, and even though the season starts in November for brick-and-mortar stores, many Slovaks leave their shopping - increasingly done online - until the last minute.

Market watchers and professionals expect that this year’s Christmas season will be similar to the previous one.

“Compared to 2012 actually nothing has changed,” Ľubomír Drahovský, an analyst with the Terno market research agency, told The Slovak Spectator. “This means that unemployment has not decreased, the purchasing power of households has not increased, prices grew only slightly and thus one can assume that the consumer will behave quite similarly to the previous year.”

Drahovský estimates that active Slovaks, i.e. working adults, will spend €250 on Christmas shopping this year, which includes food, beverages and other related expenses for Christmas and New Year festivities and gifts. This is close to his estimate for the previous year, between €230 and €250.

The Association of Trade and Tourism of the Slovak Republic (ZOCR) estimated for The Slovak Spectator that this year’s Christmas season will be weaker than last year in terms of retail sales. As for household consumption ZOCR is careful in making estimates, as retail sales decreased during the August-September period compared with the same period last year. Thus, according to ZOCR, it is possible to assume that this year’s total retail turnover will fall below the level seen last year, while the most optimistic estimates mirror last year’s level.

Eva Sadovská, analyst with Poštová Banka, expects only a slight increase in prices, as so far this year retail sales have developed in waves, i.e. periods of moderate increases followed by periods of moderate decreases, and thus she described the first three quarters of 2013 as stagnant.

“We do not expect that the last quarter will be different and we expect sales to be comparable with those of December 2012,” said Sadovská.

Nevertheless, Christmas will still be a bit more expensive this year, though prices have grown much slower than the previous two years. While in December 2011 the prices of goods and services were 4.4 percent higher year-on-year, and in December 2012 they were 3.2 percent higher y/y, Sadovská estimates the increase for this December to be less than 1 percent y/y.

The shopping behaviour of Slovaks has been an ongoing topic since the start of the crisis, according to Sadovská, attributing the declining or stagnant retail sales over the last few years to cautious consumers, strapped by persistently high unemployment.

However, even the crisis has had no impact on merchants’ love of December. Retail sales in December are usually 10-30 percent higher than other months, according to Sadovská. This means December makes up as much as one tenth of the annual volume of retail sales.

This is because Christmas shopping involves buying not just gifts, but food for the table, and the holiday is followed by sales in the final days of the month.

December, however, is not the strongest month in terms of motor fuel, said Sadovská. But in other retail sectors the month dominates, especially for sellers of food and beverages, telephones and PCs, sporting goods, electric appliances, CDs and DVDs, toys, clothes, cosmetics and jewellery, all of which exceed their average sales.

“Sellers at markets and in stands register higher sales in December than during other months of the year and online shops get their piece of the cake, too,” said Sadovská.

Sadovská warned that even though December is the strongest month in terms of sales, this December will not necessarily bring higher sales than last year. This was seen last year when December’s retail sales lagged 4 percent compared to December 2011. In 2012 only merchants selling goods at markets and stands increased their sales - by almost 7 percent y/y.

Some Slovaks opt for loans to finance their Christmas shopping. According to Drahovský, Slovakia is no different from other countries in this regard, while this period is a kind of a ‘harvest’ season for instalment payment and other similar companies.

“People [in Slovakia] are still prone to borrowing money to buy what they want and what they want to give as presents [instead of saving],” said Drahovský. “Alas, not all can calculate their financial possibilities properly and afterwards, when the [post-Christmas] reality and the time to settle the debts arrive, they realise that their instalments and costs of living far exceed their monthly income.”

According to Drahovský, this phenomenon is not exclusive to Slovakia and people must learn to calculate what is financially feasible for them.

According to Sadovská, the strongest periods for providing consumer loans are the second and fourth quarters. People tend to reconstruct their homes in the spring, but they do refurbishments in the pre-Christmas period too, in addition to purchasing appliances or furniture to a bigger extent than other periods of the year. Moreover, during the pre-Christmas period many banks come up with attractive offers, like forgiving a portion of their interest rates.

While banks leant €288 million in the form of new consumer loans to Slovaks in the first quarter of 2012, this was the weakest quarter in terms of the total number of consumer loans provided, which during the final quarter was almost €100 million more, i.e. nearly €387 million. Banks expect interest on consumer loans to increase until the end of this year.

While the Christmas season started in early November for brick-and-mortar stores, online shops in Slovakia are still waiting for the main shopping season to begin, but expectations are positive.

“The key period is just ahead of us,” Jozef Dvorský, the executive director of the Slovak Association of Electronic Commerce (SAEC), told The Slovak Spectator. He expects the upcoming season to mimic previous seasons, with a continued increase in the proportion of those who shop online. He believes that the share of online shopping will increase this Christmas regardless of how the season looks in general.

“It is increasingly obvious that the share of online shopping out of the total amount of shopping is growing and that this is happening to the detriment of shopping in brick-and-mortar shops,” said Dvorský. “I expect that this trend will be confirmed.”

Dvorský recalled that so far online shops have been satisfied with their Christmas seasons despite the economic crisis, which also hit the Slovak population.

“Internet shops benefit from the fact that most customers lack time [for shopping] or that they want to use this time for themselves and not for shopping … and prefer more and more to shop online when the character of the goods purchased enables this,” said Dvorský.

Drahovský of Terno confirmed the growing popularity of online shopping in Slovakia. He ascribes this to a change in how online shops communicate with their clients, as well as the creation of places where people can collect goods ordered online. Thus, they do not need to wait until the package is delivered to their home.

“Compared with the previous year, services have advanced to a higher level and, which is pleasant to add, they improved in quality,” said Drahovský.

But he warned that while a lot of Slovaks leave their Christmas shopping to the very last minute, this could end in disappointment for online shoppers as e-shops may not be able to deliver orders in time.

“People must learn … that it is necessary to organise things earlier,” said Drahovský.