FINE as the films might be, each year the themes of the One World (Jeden svet) documentary film festival overwhelm the films themselves. It is good that there are so many accompanying events to catch some of the overflow. 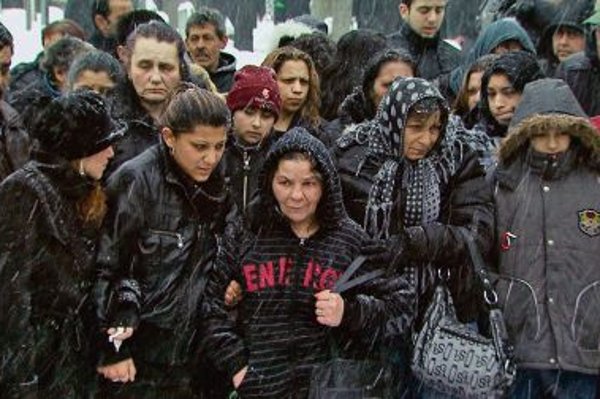 Life and Death in Tanvald. (Source: Courtesy of One World)
Font size:A-|A+0

FINE as the films might be, each year the themes of the One World (Jeden svet) documentary film festival overwhelm the films themselves. It is good that there are so many accompanying events to catch some of the overflow.

The People in Peril (Človek v Ohrození) non-profit group organises the documentary film festival focused on human rights and politics. This year’s edition included films on civil wars, natural disasters and humankind’s role in them, as well as on the way we use or abuse the Earth. The films pose important questions but also strive to find answers. Along with the films there are debates. This year’s guests included bloggers living in many of the authoritarian countries featured in the films, and anonymous “hacktivists” who protest online in their own, non-traditional way. Six days of screenings and debates (between November 21 and 26) took place in various venues in the Slovak capital.

One issue which has resonated in recent years is the Arab Spring and its aftermath. In the American documentary A Whisper to a Roar, Ben Moses explores the fundamentals of democracy as reflected in the elections in five countries: Egypt, Malaysia, Venezuela, Zimbabwe and – the only European representative – Ukraine. All five country stories evolve around the underlying fairy tale about a hero who was sent to beat the dragon plaguing his people. However, such heroes later learn that the power they gain often turns them into their own sort of dragon.

The documentary ended on an optimistic note, but the ensuing debate “Democracy for all?” explored what has since occurred; and the result did not feel particularly optimistic. In almost all of the five countries involved, the situation has either worsened since the film was completed, or has stayed the same (even though Venezuela’s tyrant Hugo Chavez died, his system of power lives on). But the debate focused mostly on Egypt, where the president brought to power after the revolution, Mohamed Morsi, was toppled in July. In addition to Egyptian economist and activist Michael Moawed Shafiq Basta, political analyst and arabist Tomáš Michaľák and political analyst Lucia Najšlová from the Europeum Institute for European Policy and editor-in-chief of V4 revue (who has been engaged in Egypt, trying to offer Czecho-Slovak experience of political transformation to countries shaken by the Arabian Spring), offered their views on how the situation in Egypt has developed.

Shafiq Basta summed up that what happened in the Arab Spring was only a beginning and that the country is not in the place where it hoped to be, but the direction is good and it is crucial to persevere and show patience. Najšlová pointed out to what was lacking in Egypt after the revolution – and what was seen in Czechoslovakia – a discussion between the nation and the politicians. She agreed with Shafiq Basta that perhaps the Egyptian election took place too soon after the revolution. They opined that maybe the money spent on the new constitution and the election should have been given to the education system to eradicate illiteracy.

One question remained unanswered: what will come next? Najšlová suggested that it seems that there is no real political power now in the country that could please the whole population. Shafiq Basta explained that the general stance of Egyptians is “everyone is the owner of the right opinion and the right side all the time” and people do not listen to each other. But he added that the economic situation will push Egyptians to seek a solution; expressing belief and hope that it will be the young people who are able to find a way out of the situation.

Another film, the Czech documentary Life and Death in Tanvald, explored an incident in a Czech town in which a senior citizen killed a young Roma boy. The producers, directors and cameramen, Filip Remunda and Vít Klusák, filmed in Tanvald for one year, arriving shortly after the New Year’s 2012 killing.

They managed to talk to a host of locals, including non-Roma youths, Roma inhabitants, the family of the deceased man (including an unexpected encounter with his widow and two children), local authorities and the man who was accused and eventually acquitted in the case.

Remunda and Klusák expressed their shock at the amount of both open and hidden racism that they encountered, but admitted that they also had some moral dilemmas when shooting the film, which is evident when they present their own conflict surrounding the son and the family of the late Roma man.

If their film draws any conclusions – and it raises more questions than it answers – it is the fact that the investigation (that ended with the finding that the man who killed the Roma acted in appropriate self defence) ignored some facts, that evidence was manipulated or mixed up, and not all of the witnesses were heard. Remunda and Klusák point out these discrepancies, but they also depict the overall mood in Tanvald.

They made the documentary as part of the “Czech Short” (Český Žurnál) cycle for public broadcaster Czech Television, and their approach was quite different from how most of the national media covered the case in early 2012 when it happened. Asked by The Slovak Spectator about the role and methods of the media, Klusák said: “I fear that when reporting on right wing extremism, the media do not play a very noble role. They resort to something that could be called ‘30 seconds for Mr Hitler and 30 seconds for Mr Jew’. The effort to give balanced reporting can be unfortunate in the end, as – in my opinion – they thus legitimise the anti-Roma sentiments. The media should also educate, dissolve the stereotypes, help meet and get to know the two groups.” He specified he would welcome the media showing the daily life of a “normal”, average Roma family – which non-Roma rarely get to see – rather than focusing only on the “troublesome” cases from police statistics.

“The subject is now very topical, in the Czech Republic and the whole of Europe, as Roma are very discriminated against – which is supported by general moods in the public, but also the specific behaviour of some politicians, not only the extremist ones, but unfortunately also some mainstream politicians,” Remunda said. “This would not be possible in some western-European countries.”

“What changed us was the fact that by tackling this issue, we suddenly faced the racism directly and we witnessed some shocking statements and also got some threatening reactions after the film was broadcast,” Remunda added. “I was really shocked that someone can talk and think in this way – in the 21st century.”