THE OLDEST “patient” to be examined so far at the Trnava policlinic is a dinosaur egg, about 70 million years old. 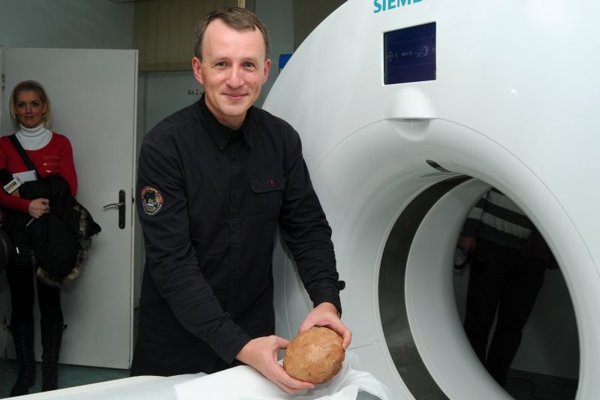 THE OLDEST “patient” to be examined so far at the Trnava policlinic is a dinosaur egg, about 70 million years old.

Palaeontologist Martin Kundrát brought it to the Institute of Depictive Diagnostics (IZD) in Trnava to confirm its flexible structure through computer tomography (CT). The egg was examined as an ordinary patient, and it took only a few seconds to scan the fossil, weighing about 2 kilograms.

The egg comes from the Gobi desert in Mongolia, and is owned by the Slovak National Museum. Thanks to a three-dimensional (3D) output from the most up-to-date CT device in the central and eastern European region, which is installed in the IZD, Kundrát wants to study the deformities of the petrified eggshell and discover its original features. The research could offer proof that eggs of some dinosaurs had a softer structure than many of today’s eggs.

Thus, Kundrát can confirm the earlier hypothesis of US expert Jack Horner, who advised director Steven Spielberg on his film Jurassic Park.

“So far, we don’t know which dinosaurs had such eggs; there are several of them in the world,” Kundrát, who researches for the centre of Evolutional Biology at the Uppsala University and in other research facilities worldwide, told the TASR newswire.

The examined egg has a visible gap on its surface. Kundrát believes that the small dinosaur pecked its way out of it. Sediment got in through the hole, but in spite of this, the shell did not break and shows no serious signs of damage.

The results of this research should be ready within a year. “Then, I will be happy to present them in Slovakia,” Kundrát said. The scientist plans to calculate the probable shape of the egg before the baby dinosaur hatched thanks to a 3D model.