Drowning in wine since the 7th century BC

There’s a certain irony in the fact that Slovakia is considered among the so-called “new” wine-producing countries of the world. Winemaking in these parts has a proven history dating from the 6th–7th century BC. Yet the comparatively low awareness of Slovak wines abroad is largely owing to patterns of its consumption: almost none makes it beyond the keen wine-drinkers of Slovakia itself. It means that if you want to try Slovak wine – and you should –you’ll need to come here to do so. 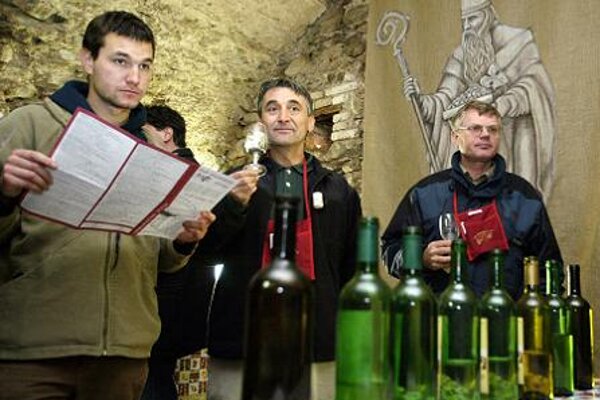 There’s a certain irony in the fact that Slovakia is considered among the so-called “new” wine-producing countries of the world. Winemaking in these parts has a proven history dating from the 6th–7th century BC. Yet the comparatively low awareness of Slovak wines abroad is largely owing to patterns of its consumption: almost none makes it beyond the keen wine-drinkers of Slovakia itself. It means that if you want to try Slovak wine – and you should –you’ll need to come here to do so.

The quality of Slovak wines has been improving rapidly in recent years, as proven by recent results in international competitions. Slovak wines won nine gold and 38 silver medals at the Viniales Internationales Paris 2013 competition, for example, outperforming even the wines of the host country France. In mid May Slovakia had another chance to boost its image as a wine-producing country when Bratislava hosted the 20th Concours Mondial de Bruxelles (CMB) 2013, one of the world’s most prestigious international wine competitions.

According to the CMB president Baudouin Havaux, the tasters discovered a region “which is maybe less known but has [a lot] to offer”.

He added as he introduced the competition: “I’m very happy that I’m here, because this is not an accident: one of the goals of the Concours Mondial de Bruxelles is to watch the development of the wine market as well as new trends, and it is obvious that in central Europe, and especially in Slovakia, this development is very interesting.”

Havaux lists Slovakia alongside places like Chile, New Zealand and South Africa as the emerging nations, separate from countries with a tradition of wine production such as Italy, Spain and France.

“I think that the time for a new wave, which will balance these two tendencies between traditional countries and the so-called new countries, has arrived,” said Havaux. “We see this development also in central Europe. And Slovakia is a notable example of this development, where the quality of wine is really on a high level and keeps rising.”

“We here in Slovakia cannot afford to produce cheap, low-quality wines,” said Jaroslava Pátková, executive director of the Grape and Wine Producers of Slovakia (ZVHV). “In this [area], bulk producers beat us.”

Pátková highlights the importance of new varieties among Slovak wine producers, which are specifically cultivated to exploit the full potential of Slovakia’s climate and soil. The result is a selection of wines that cannot be made anywhere else.

“You can taste Chardonnay almost everywhere in the world, but the Devín, Dunaj, and Mília varieties you can taste only here in Slovakia,” said Pátková. “This is how we can establish ourselves in the world. Devín and Dunaj are wines that are also harvesting success in world competitions.”

White Devín and blue Dunaj are the most popular Slovak grape varieties among Slovak winegrowers.

“These two varieties occur in the portfolio of almost every Slovak winemaker,” Ľudmila Miškovičová from the Slovak National Collection of Wine told The Slovak Spectator. She estimates that in total Slovak grape varieties make up about 3 percent of the area cultivated as vineyards in Slovakia, but that the use of Slovak varieties has been growing significantly in recent years.

Miškovičová specified that the white Devín grape, a cross between the Tramín červený (Gewürztraminer) and Veltlínske červenobiele varieties, produces a green-yellow wine with a moderate spicy aroma, leaning towards Muscat. This variety, crossed by Dorota Pospíšilová and Ondrej Korpás in 1958 in the Wine Research Institute in Bratislava, produces dry wines as well as naturally sweet wines.

“They enthral with spiciness, fullness and perfect harmony,” Miškovičová said, adding that Devín, within its aroma and taste, conceals hints of dried apricot, dandelion honey and bread.

The Dunaj variety was created by Pospíšilová in 1958, when she first crossed Muškát Bouchet with Oporto and then with Svätovavrinecké (St. Laurent). With its early ripening it is a very suitable variety for Slovak climatic conditions. It also has good resistance to frost.

As the capital of the country, it is only fitting that Bratislava’s vineyards also made the city the first significant viticultural and wine-making town in what is now Slovakia. However, the commercial prosperity of the modern city, and pressure from developers, has meant the acreage of vineyards in Bratislava has decreased over the years.

Bratislava and its surroundings belong to the Small Carpathian wine-growing area and the region’s changing terrains mean that each of its wine-growing districts is known for a different variety. In Rača it is Blaufränkisch or Frankovka modrá; in Vajnory it is the white Leanka; and Devín is best known for its currant wine, according to Pátková.

Frankovka has a royal seal of approval, bestowed by Empress Maria Theresa in 1767. She was reputedly enchanted by its taste and quality and deemed it suitable to be served at the imperial table. Two centuries later, scientists were able to give her opinion some additional credence when they discovered resveratrol, an ingredient believed to have benefits to the heart, in Frankovka.

According to Pátková, the sunny location of the vineyards in Rača accounts for the quality of Frankovka, a belief echoed by Miloš Máťuš, a grape grower and wine maker from the region, who added that the area also enjoys specific soil conditions. Máťuš, who is also one of the organisers of the annual festival of Frankovka in Bratislava, describes Frankovka modrá wine as soft, full of concentrated bouquets of fruit and berries, with a harmonic and round taste.

Many Slovak wine experts insist that wine should be tasted where it is produced, and a lot of wine makers have thrown open their cellars to allow visitors the opportunity to do just that. Numerous ancient cellars or brand new premises are open throughout the year, many clustered along the so-called “wine roads” that snake the country.

The Small Carpathian Wine Route (MVC) is the oldest example in Slovakia and it hosts several popular events through the year, including the annual autumn Day of Open Wine Cellars and the annual spring St Urban’s Day of Open Cellars. On both occasions, many of the top wine producers open up for visitors to taste young and vintage wines. Meanwhile, the Slovak National Collection of Wine in Pezinok offers a collection of the 100 best wines from Slovakia to taste or buy year-round.

From June 2013, it will also be possible to sample a wide selection of Slovak wines at the Museum of Viticulture in Apponyi’s Palace on Bratislava’s Main Square, which will house a branch of the Slovak National Collection of Wine.