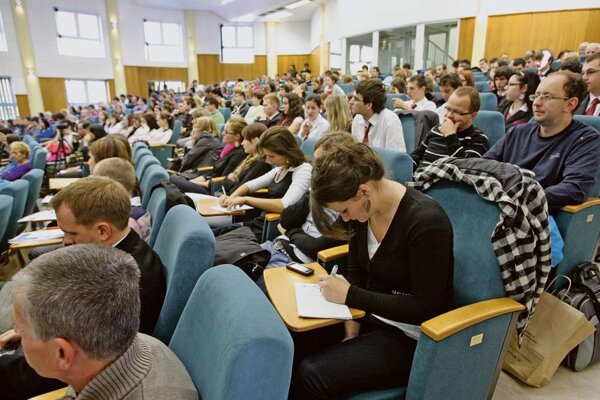 The Academic Ranking and Rating Agency (ARRA) released its findings on November 27. The ranking evaluates the quality of education and research at 109 faculties of Slovak universities, divided into 11 categories based on the fields of study. It has not seen big changes compared to previous years, but revealed important trends, which might lead to bigger differentiation between schools in the future, observers say.

This drop in interest in studies is less marked in better-quality faculties, and the stable leaders in their groups in the ranking have actually recorded an increase in the number of applicants, Ostrovský said, as reported by TASR.

ARRA also revealed that growth in the number of PhD students has halted and for the first time in the nine years that ARRA has been publishing its ranking, the number of doctoral students dropped year-on-year. This is again not true for the faculties that rank among the best in the long run, according to Ostrovský.

“On the other hand, this drop was seen to a much higher extent in weaker faculties, which might be a sign of the starting differentiation of schools between those doing research and those doing education,” Ostrovský said, as quoted by TASR.

One of the positives revealed by ARRA is that although Slovakia still lags behind other countries, it saw an increase in the number of publications and citations of Slovak scientific works in foreign databases during the past two years, especially at economic and social science faculties. Moreover, the number of top researchers and research teams increased, the study shows.

“This means that the schools will have to fight for students with proven quality, which is also partly seen today,” the ARRA report reads.

Another factor might be the saturation of the market, adds Renáta Králiková from the Slovak Governance Institute. After 1989 there were few students with university education, but later both Slovak and European laws started to require university degrees for some jobs.

“It would be ideal if the universities could use this situation to support quality,” Králiková told The Slovak Spectator.

While last year ARRA reported a 4-percent increase in the number of doctoral students, this year it dropped by 8 percent, with top ranked schools being an exception.

This might be the result of changes to financing the PhD studies adopted last year. Schools do not receive the money per doctoral student, as was the case in the past, but the money is part of the package for scientific activities. The changes came in response to the so-called “doctoral paradox”, which means that the number of PhD students was increasing at schools with low research activities, the ARRA report reads.

Králiková agrees that the increase in the number of doctoral students in past years was unhealthy, especially at schools that do not focus on research. During 1998-2006 Slovakia even had one of the highest increase in PhD students in the world, she added.

Several schools in Slovakia are not affected by the trends described by ARRA. STU, for example, says that despite the decreasing number of graduates from secondary schools, the number of applicants for studies and even the number of enrolled students remains stable. The school also reports a stable number of doctoral students, according to the press release provided to The Slovak Spectator.

STU Rector Robert Redhammer says that they support students participating in research and try to connect education with practice.

“Our priority is to bring up a graduate who will be flexible, and will be able to choose the most interesting of job offers,” Redhammer said.

Karol Mičieta, rector of UK, pointed to the high number of foreign students interested in studying at the university’s medical schools and the low number of jobless graduates from PhD degree. UK supports the connection between studies and practical experience so the students “will naturally become a competitive element in the labour market”, Mičieta told The Slovak Spectator.

Both schools say they want to continue supporting research through new research parks they are building.

During the November 27 press conference Ostrovský said that the Bologna Process, which in fact divided university studies into three parts (bachelor, master/engineer and doctoral), has failed, since the schools still understand the bachelor programme as some kind of preparation for their master’s or engineer studies. More than 80 percent of bachelors continue in their university studies.

“Too many overeducated people leave the schools, for whom the labour market cannot offer jobs, so they work in lower positions,” Ostrovský said, as quoted by the Sme daily.

Since the employers do not distinguish between secondary school leaving exams and bachelor diploma, this title is degraded, Ostrovský added.

To solve the problem he proposes to introduce one, universal kind of bachelor programme that will focus on practical experience. Moreover, all graduates from a bachelor programme will have to go through obligatory one-year work experience before continuing at next degree, as reported by TASR.

Králiková agrees that the whole bachelor degree is oriented incorrectly. The students often do not learn things which they need, like academic writing, critical reading or how to work in multidisciplinary teams.

She however considers the idea of obligatory practice problematic, saying she is not sure whether there will be enough jobs for students. A better solution would be the participation of students in projects that focus on solving a specific problem, like the problem based learning programme used in the United States, she said.

“It is also necessary to focus on defining quality tertiary education and include it into evaluation of the accreditation committee,” Králiková added.

The Education Ministry is leaning toward the professionally oriented bachelor programmes. This will enable better connection between studies and requirements of employers and it is possible that some graduates will opt not to return to university, but will directly start to work, ministry spokesman Michal Kaliňák told The Slovak Spectator.

“It will be necessary to deal with the motivation of employers and specific conditions, but we see it as more systemic and more sustainable solution,” Kaliňák said.