SHORTLY after the Smer-controlled parliament passed a tax licence law obliging limited liability or joint stock companies to pay annually into the state coffers regardless of whether or not they make a profit, some were quick to remind Prime Minister Robert Fico of his promise not to raise taxes. In response Fico has pointed to another law passed in parliament on December 3, which cuts corporate income tax rates from 23 to 22 percent, and suggested there may be more tax cuts to come. 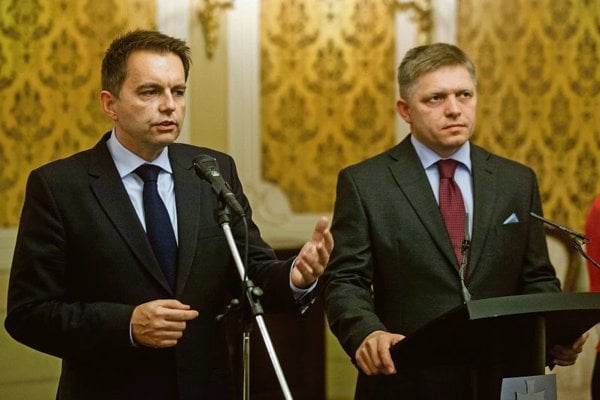 SHORTLY after the Smer-controlled parliament passed a tax licence law obliging limited liability or joint stock companies to pay annually into the state coffers regardless of whether or not they make a profit, some were quick to remind Prime Minister Robert Fico of his promise not to raise taxes. In response Fico has pointed to another law passed in parliament on December 3, which cuts corporate income tax rates from 23 to 22 percent, and suggested there may be more tax cuts to come.

“I do not want to go into tax hikes, quite the contrary, we have cut the corporate income tax and we want to go further,” Fico told the HN Club, a discussion facilitated by the Hospodárske Noviny daily, on December 3. “Next year if the economy and the financial situation develop well, we will go from 22 percent to 21 percent. Maybe the optimum will be somewhere at 20 percent.”

Opposition parties are less than enthusiastic about the tax licence and are making plans to challenge the legislation with the Constitutional Court. While businesses welcome the tax cut, they consider its scale too little to compensate for the death of the 19-percent flat tax in early 2013.
“I view the one-percentage-point cut only as a quarter correction of the tax hike from the beginning of 2013, when the tax grew from 19 to 23 percent,” Róbert Kičina, the executive director of the Business Alliance of Slovakia (PAS), told The Slovak Spectator, adding that more cuts are unavoidable “if we want to preserve our competitive position in the fight for new investments”.

While the government argues that its so-called tax licences will help rein in tax evaders, the opposition argues the policy amounts to little more than a new tax by another name. The state has the ambition to collect €112 million annually on the tax licences.

The self-employed and newly established companies will be exempt from the tax licence during the first year of running their business. Companies under bankruptcy proceedings or liquidation will not pay the licence either. There will be three tax licence rates: companies that are not value added tax (VAT) payers will pay €480; the state will collect €960 from VAT payers and all companies with revenues greater than €500,000 will pay an annual licence of €2,880.

It will be possible to contribute 2 percent of the tax licence payment to a non-profit organisation while companies which employ physically disabled people will be eligible for lower rates, the TASR newswire reported.

Kičina of PAS assesses the tax licence negatively, “since it does not fight the reasons for tax evasion, due to tax laws being full of loopholes, but instead punishes the whole sector flatly, including those who are not tricking the law and are in loss for objective reasons”.

“Though statistically it is possible to find out how many firms do not pay taxes, we do not know how many of these abuse the soft laws and are in losses not due to speculation but due to a lack of orders or worsening of the business environment,” Kičina told The Slovak Spectator on December 4.
Kičina added that before introducing any solution there should have been more analysis of why so many firms were reporting losses each year. An estimated 60 percent of registered Slovak firms do not pay income taxes.

“I assume that a more targeted fight against tax evasion would involve an analysis of tax-accounting imperfections in the laws,” Kičina said.

Finance Minister Peter Kažimír expects that the tax licences will also “clean up the business registry, since there are 10,000 entities recorded which are not responding”. He said earlier this year that the policy would motivate owners of such companies to liquidate the company and erase it from the registry.

The opposition, meanwhile, criticises not only the merit of the law, but also the way the ruling party has been introducing these changes, suggesting that the government of Fico avoided a standard legislative process by submitting a relatively brief draft law to parliament and then attaching a number of changing proposals.

The leader of the NOVA movement, Daniel Lipšic, claims that the revision goes against the constitution as it is retroactive and with other opposition parties he plans to challenge the legislation with the Constitutional Court. Slovak Democratic and Christian Union (SDKÚ) Deputy Chairman Ivan Štefanec and Most-Híd Deputy Chairman Ivan Švejna have supported Lipšic’s initiative.

Most-Híd for example also argues that “there cannot be a tax from something that has not been created yet” and thus the tax licence is at odds with the constitution, the SITA newswire reported.
Kažimír on November 29 during the parliamentary debate argued that what he sees behind the criticism is the political aspect and the effort to mark the whole revision as bad: “I am not identifying myself with condemning the business community, I came from it”, SITA reported.

Smer deputy Ladislav Kamenický joined the parliamentary dispute, suggesting he does not understand how some people are doing business if they are unable to pay a couple hundred euros in taxes.

“In principle we understand it as a necessary evil,” Rastislav Machunka of the Federation of Employers’ Associations (AZZZ), an employer interest organisation, told The Slovak Spectator. “The Finance Ministry conditions the lowering of the rate of corporate income tax with the introduction of the licence.”

According to Fico, businesses might object to some of the measures the government has passed in an effort to curb evasion from income taxes, but exactly these measures should create room for cutting taxes for firms.

“We need to seek money where it is,” Fico told participants of the HN Club.

The prime minister avoided being more specific about when the taxes might be cut further in the future, adding that the current rate corresponds with the country’s present economic condition. He does not see room for easing the payroll tax burden for now, according to SITA.