CHRISTIAN Konigsfeldt often uses his bicycle in Bratislava and he is confident that Slovakia could find inspiration from Denmark’s bicycle-friendliness, as the Danish ambassador to Slovakia sees here “an evident potential to expand the possibilities for using bicycles, for pleasure as well as a means of transport”. The Slovak Spectator spoke to Ambassador Konigsfeldt about the energy policies of his homeland, which tops the World Happiness ranking, as well as its knowledge-based economy and the business and tourism potential between the countries. 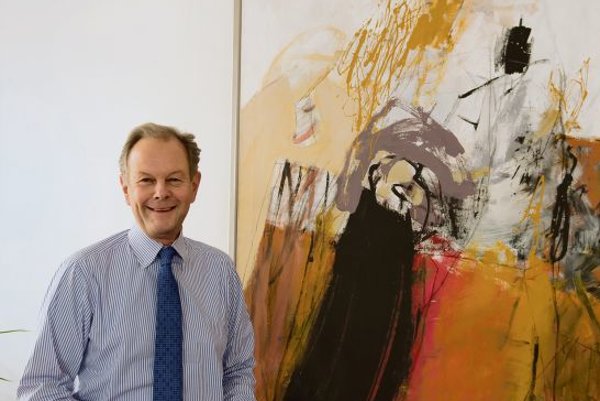 CHRISTIAN Konigsfeldt often uses his bicycle in Bratislava and he is confident that Slovakia could find inspiration from Denmark’s bicycle-friendliness, as the Danish ambassador to Slovakia sees here “an evident potential to expand the possibilities for using bicycles, for pleasure as well as a means of transport”. The Slovak Spectator spoke to Ambassador Konigsfeldt about the energy policies of his homeland, which tops the World Happiness ranking, as well as its knowledge-based economy and the business and tourism potential between the countries.

The Slovak Spectator (TSS): Based on a 156-nation survey, the World Happiness Report, Denmark ranked at the top in 2013. What factors are, in your opinion, behind this ranking?
Christian Konigsfeldt (CK): Denmark traditionally ranks at the top of a number of international surveys, all contributing to the term “Happy Danes”. Several factors contribute to this positive phenomenon. Denmark has a vibrant democracy, with traditions for a coalition government, in cases even with a coalition minority government; the country respects the principle of separation of the legislative, executive and judicial powers, as well as a free and independent press. Furthermore, the rule of law prevails, the welfare system takes care of the citizens and a dynamic economy is doing relatively well even in these difficult times. Danes are the happiest people despite the very high tax rate on personal income. I trust this is because Danes get a lot in return for their taxes in the form of health services, education, etc.

TSS: Denmark is a cycling nation while Copenhagen is world famous for its cycling culture. Why is cycling so popular in your homeland? Does Slovakia, in your opinion, have the potential to become more bicycle-friendly?
CK: Approximately 30 percent of Copenhageners use the bicycle as a means of transport to work and school every day. Comfort, speed, health and safety motivate people to prefer the bicycle over other means of transport. City planners therefore pay a lot of attention to the bicycle culture and a network of bicycle paths are found all over the country. I have often used my bicycle to and from the embassy in Bratislava. I think that Slovakia could find inspiration from the experience in Denmark because Slovakia certainly has an evident potential to expand the possibilities for using bicycles, for pleasure as well as a means of transport.

TSS: The global conservation WWF praised Denmark’s ambitious climate plan to achieve 100 percent renewable energy across the economy by 2050. How does Denmark plan to achieve this goal?
CK: The Danish government’s Energy Strategy 2050, by which Denmark is to become independent of fossil fuels by 2050, contains clearly defined steps and phases towards this ambitious goal. The change will be gradual and it will not be a magical one-step transformation. For example, already in 2020, 33 percent of Denmark’s energy is to be produced by renewable energy sources and more than 60 percent of the electricity consumption will be powered by renewable energy.

Onshore and offshore wind power will be the main focus, but bio-energy, biogas, geothermal and solar energy will also play a significant role. All these goals will result in complete independence from fossil fuels in 2050. Nuclear energy is not part of the strategy.

TSS: Denmark puts emphasis on a knowledge-based economy. For example, back in 2011 Denmark led the list of the top 10 most innovative countries. What is the history of this development and what factors are behind it?
CK: Denmark, like Slovakia, is a small country with an open economy. In order to remain competitive in an ever more globalising world, Denmark has gradually changed its economy from being based on agriculture and industry to a knowledge-based economy. A fundamental prerequisite for this is the high quality of education, which for a number of years has been a priority in Denmark. Through a combined effort, universities and the private sector have paid a lot of attention to research and development and graduates are qualified for work opportunities. For this reason, foreign enterprises depending on innovation, like pharmaceutical companies, have found it attractive to establish themselves in Denmark in order to benefit from the favourable research environment.

TSS: Denmark is not a member of the eurozone. Is there any discussion within society on membership in the euro area? What are the drawbacks of not being a eurozone member and what are the benefits?
CK: In September 2000, Denmark had a referendum on whether to join the eurozone. The result was that a majority of the population, 53.2 percent, voted against it. Since then, no further referenda have taken place. Recent polls show that a majority of the Danish population is sceptical about participating in the eurozone. It seems unrealistic that Denmark will be joining the eurozone within the near future. However, the question still figures on the current Danish political agenda. The Danish currency, the krone, is pegged to the euro. This gives us many advantages in terms of the credibility of our exchange rate and economy. However, we have less influence on the decision-making process in the European Central Bank in Frankfurt.

TSS: There are Danish investors who have already invested in agricultural production. What factors lure Danish farmers to Slovakia?
CK: Denmark was originally an agricultural country and it maintains strong roots in agriculture. Today, Danish farmers are among the best in the world in terms of efficiency and quality of production. When the markets in central Europe opened after 1989, the Danish government decided to stimulate reforms in eastern European countries to advance economic and industrial growth and boost closer economic cooperation between Denmark and those countries. A venture capital fund was established providing loans, share subscriptions etc., on normal commercial market conditions. Slovakia benefited from this. Several Danish farmers as well as industrial enterprises utilised the venture capital fund to invest in Slovakia. Today, Danish farmers contribute to Slovak economic growth, they create employment, they pay Slovak taxes and they ensure a transfer of know-how and new technology.

TSS: What areas of Slovakia’s economy, in your opinion, offer potential for further cooperation or prospects for Danish investors in Slovakia?
CK: Today, more than 50 Danish-owned companies are active in Slovakia. I am happy to see that most of them have been successful and that they are able to compete in the global market. Approximately 13,000 jobs in Slovakia are due to Danish investments. I do not wish to single out a specific sector which could attract Danish investors. I see big potential in various areas, but it is up to the Danish companies and investors to decide. Slovakia has a good market position in the centre of Europe with a cost competitive and qualified labour force in many areas. However, Danish companies will only invest in Slovakia if it is commercially viable and beneficial for them, and thereby also for Slovakia. I will do my best to further enhance the bilateral commercial cooperation during my term in Slovakia.

TSS: You started your diplomatic mission in Slovakia earlier this year. What are the major areas you plan to focus on while serving here? What surprised you the most after your arrival in Slovakia, something you did not expect?
CK: My aim is generally to enhance and expand the political, economic, commercial and cultural relations between our two small – but great – countries. Specific focus will be on promoting and enhancing the possibilities of bilateral trade and investment, assisting Danes in distress efficiently and at any time, and analysing and reporting on Slovak internal political and economic development, as well as the major foreign policy issues affecting our countries and the region.
I have been able to do some travelling outside of Bratislava, and I have noticed that Slovakia is a beautiful country with some amazing landscapes and cultural heritage sites. The friendliness and warm welcome by people wherever I have been has made a profound and positive impression on me.

TSS: Culture is one of the best vehicles for communicating values and building bridges between countries. What aspects of Slovak culture are or could be of interest to a Danish audience and vice versa? Danish cinematography is quite popular in Slovakia.
CK: The embassy generally strives to strengthen the knowledge of Danish culture in the broad sense of the term. Among other things, I have been pleased to experience how well Danish cinematography has been received in Slovakia. A good and recent example of this was the International Film Festival Bratislava, IFF, at the beginning of November, where the Danish film director Bille August received an award for his artistic excellence.
I think that Slovakia with its castles, historical cities and sites, several of them even figuring on UNESCO’s World Heritage List, has a lot of cultural heritage to offer. This, combined with a cosy atmosphere, could be attractive for many Danes.

TSS: Has the tourism potential between Slovakia and Denmark been fully explored? In your opinion, do Slovaks and Danes know enough about each other?
CK: As mentioned before, Slovakia has a lot to offer Danish tourists, and more and more Danes visit Bratislava and Slovakia. Direct flights between Copenhagen and Bratislava during the summer season undoubtedly contribute to this. Considering that Slovakia has no access to the sea, I think Slovaks would find the beautiful sandy beaches in Denmark attractive. Cottages along the beaches can be rented the whole year and offer endless possibilities for swimming, sailing and relaxation. For those who like an active holiday, there are more than 12,000 kilometres of children-friendly biking routes across Denmark. The many different theme and amusement parks are attractive for families with children. Legoland is an example of this.