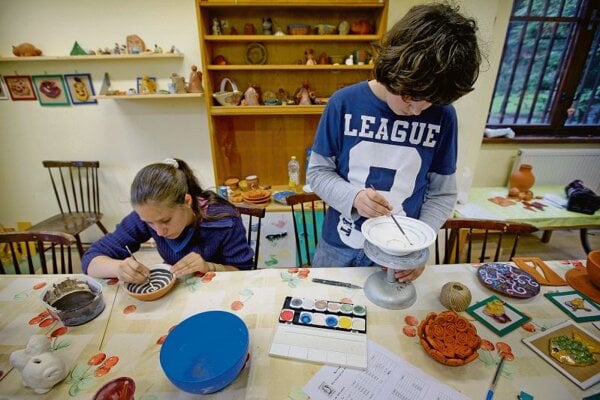 PUBLICLY funded youth recreation centres have been laying off employees, cancelling courses and even declaring bankruptcy ever since the new Education Ministry funding rule became effective on January 1, 2013. Since then 30 centres have closed as state support was funnelled to municipalities, which have a free hand in what is done with the money.

“The revision is very bad. In the past, centres had contributions of around €190 per member; currently it is €60, which does not even come, and if it does it is a sum less [than €60],” Ľudmila Chodelková, the director of the Žirafa recreation centre in Žilina, told The Slovak Spectator, adding that €60 is not sufficient for running courses in the way they had done before.

According to the new rules, municipalities receive funds for a child attending a course at a recreation centre with permanent residence in their town. Before the changes became effective, money went directly to those centres. Municipalities are required to finance centres in their territory but do not have to send money to centres in other villages or towns. Moreover, funds are not dedicated just for the centres, and municipalities can make decisions on their future use, according to the RTVS public-service broadcaster.

Another change is that children between five and 15 are supported, while in the past state funds could be used for even older children, the SITA newswire reported.

The reason for the change was due to the fact that the previous system of funding recreation centres in schools and elsewhere was complicated and indirect, Education Ministry spokesman Michal Kaliňák told The Slovak Spectator. The changes are supposed to prevent fraud involving state contributions when centres asked for money for children not attending programmes. Moreover, Kaliňák claimed that instead of closing 30 centres, 40 were opened.

“We evaluate the impact of the law revision positively because the [official] number of children attending courses in recreational centres is currently more accurate,” Kaliňák said, “and municipalities spend their finances more effectively.”

The Association of Towns and Villages of Slovakia (ZMOS) also supports the change because it prevents centres from drawing money without being controlled by authorities. It also ended discrimination against people who wanted to attend courses run by kindergartens and elsewhere, which have not been receiving such funds, ZMOS spokeswoman Marta Bujňáková told The Slovak Spectator.

However, the current system of state funding negatively affects activities of recreation centres, particularly those which are located in small villages where there is just one centre, the Leisure Time Centres Association (ACVČ) chairwoman Marta Hanečáková said, as quoted by SITA. Hanečáková added the association had 120 centres in 2012 and this number has decreased to the current 70.
Since the revision there have been reports of fewer children attending such courses due to higher prices.

For example, the Centre of Leisure Time Activities in Spišský Hrhov noted that from 3,000 children that once attended, just 217 children continue to attend courses. Moreover, all external employees were fired because “municipalities are not willing to fund our activities”, said Miloslav Repaský, the centre’s director, as quoted by the Sme daily.

Another centre in Klčov village providing services for around 500 children had to be closed after three years, Sme reported.

“The creation of the centre demanded a lot of paper work and now we are forced to close it,” Klčov Mayor Miroslav Fabián said, as quoted by Sme. “We wanted to show that even [people] in villages can take care of their children. Even children from neighbouring villages were attending [the centre].”

Kaliňák admitted that new legislation may be the reason for the closure of some centres, but stressed that it is because their funding is now more effective. On the other hand, the ministry noted that some villages want to create their own centres so their children will not be forced to go to centres in other villages.

In the case of Žirafa’s recreation centre, the Education Ministry stopped making contributions to organisations that once had 8,000 members. The Žilina municipality decided to merge its centre with another one in the city, but this is not possible according to the current legislation. Žirafa has since transformed itself into a private centre, according to the Hospodárske noviny economic daily. Chodelková claims this was done in revenge for her previous criticism of the new rules.

“Currently, we see that many children, particularly those older than 15, are without organised recreational activities and nobody takes care of them because the contribution is [either] low or nothing,” Chodelková said.

Municipalities refuse to fund recreation centres because they lacked transparency in the past and due to their inadequate demands, Bujňáková said. Municipalities receive €60 per child while centres demand two or three times more.

REGULAR recreational activities usually help the children of foreigners in Slovakia to overcome language and social barriers, according to IUVENTA, the state-run Slovak Youth Institute study.
“I can judge it from the point of view of sports activities,” said a primary school teacher in an interview for the study. “It does not matter where that boy comes from; if he scores, others respect him.”

The survey combines the government’s official data about foreigners with information from 67 questionnaires filled out by professionals working with youth, as well as 15 personal interviews and 20 interviews with foreign children and their parents. The data was gathered in 2012.

Around 0.2 percent of schoolchildren had foreign born parents in 2012, according to the IUVENTA study.

Approximately 80 percent of professionals in the study said that they rarely meet with the child of a foreigner in their work. However, nearly 47 percent of them say recreational activities help significantly with their integration process. They noted that the impact of recreational activities on foreigners’ children depends on their knowledge of Slovak language and their personalities.

Besides the language barrier, professionals in the study mentioned a lack of interest in recreational activities, problems with meeting deadlines, unpredictable behaviour and fulfilling new rules as the biggest complications of working with the children of foreigners. Sometimes, cultural differences also cause problems.

“They [children] went to swim and Slovak girls changed into swimsuits that were a problem for [Muslim] girls,” said an NGO worker quoted in the study.

However, around 80 percent of those who work with foreigners have not experienced any cultural difference that would negatively affect recreational activities.

On the other hand, many teachers participating in the study said the presentation of foreign cultures, traditions or gastronomic specialities comprise a significant step for improving tolerance between Slovaks and foreigners. Foreigners’ children bring to their groups new games and activities, and may present their talents resulting from a different culture.