THE MOST precious historical artwork of the Bojnice Castle, 10 panel paintings by medieval Florentine maestro Nardo Di Cione, known as the Bojnice Altar, has been returned to the castle chapel after 80 years – as was long wished by the castle’s last owner, Count Ján Pálffy (1829-1908). 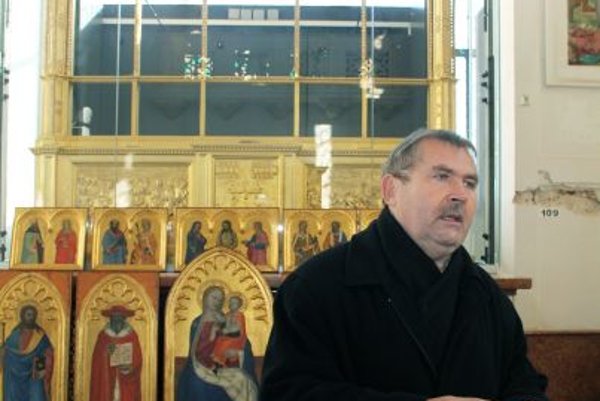 THE MOST precious historical artwork of the Bojnice Castle, 10 panel paintings by medieval Florentine maestro Nardo Di Cione, known as the Bojnice Altar, has been returned to the castle chapel after 80 years – as was long wished by the castle’s last owner, Count Ján Pálffy (1829-1908).

Until now, only replicas of the panel paintings could be seen in the chapel on the gilded altar. The originals were exhibited in the Pentagonal Tower of the castle because of the more suitable climate. A vast reconstruction of these rooms began in summer 2013, and the Bojnice Altar was installed in a big exhibition of Italian painting at the Slovak National Gallery in Bratislava. On November 27, it was transported in special wooden cases to the castle, where it was carefully unpacked and gradually set into the space of the altar. A special air-conditioning unit – one of the most up-to-date devices of its kind in Europe – had to be custom built for the chapel.

“The reason is that otherwise it would be impossible to create an appropriate climate in the chapel that is necessary to protect the precious paintings,” Bojnice Museum head Ján Papco told the TASR newswire.

“The history of the Bojnice Altar is very turbulent. This polyptych was painted in the 14th century by Nardo di Cione, probably for the Augustinian monastery in Pisa. It is not known when and why they were removed from the chapel, but it is certain that Pálffy discovered them in an antiquity shop by the mid 19th century. He was famous in Europe as a big fan and connoisseur of art. However, we don’t know when or where he bought them. But he had a chapel built for it and installed there a new, gilded, carved altar. He himself designed the skeleton of the altar. He didn’t live to see the paintings set up [in the altar],” Papco added.

In 1993, three thieves stole the five biggest paintings with the goal of selling them. They pretended to be ordinary visitors and allowed themselves to be locked in the chapel balcony, unbeknownst to the custodian. Then they rappelled into the chapel, took the paintings and smuggled them out through tiny windows, into the castle park. Police offered a reward, but for more than a year no trace of the paintings was found. Later, one of the thieves, serving a sentence for another crime, disclosed his participation in the theft, hoping to get a milder sentence. Thus the paintings were saved, found hidden in Zlín.

The paintings were partially damaged, however, and thus they were brought to Prague – together with the remaining ones, which remained in the castle – to be restored. From there, they became part of the Italian collection of the Czech National Gallery in Prague. Several requests were sent to return them, and a wide media campaign, as well as demonstrations asking for recovery of these precious works, put pressure on Prague. But it took the intervention of both Czech and Slovak prime ministers to return the altar to Bojnice in exchange for other rare Slovak artworks.

“The altar was moved to Bojnice on December 15, 1995, under tough security precautions and placed in the Pentagonal Tower where a temperature of around 18°C with 60-percent humidity had to be secured. Due to this, the artworks remained in good shape,” Papco said.

Visitors are able to see the re-installed altar as of December 6, when the Magic Christmas event starts at the Bojnice Castle.