THERE was little drama as the state budget for 2014 sailed through a parliament dominated by the ruling Smer party on December 12, with all the 81 Smer deputies present voting in its favour and nearly all members of the opposition opposed. However, the government’s commitment to deficit targets, along with the means through which it plans to achieve these goals, will test how waterproof the coffer plan, tailored by the department of Finance Minister Peter Kažimír, is. 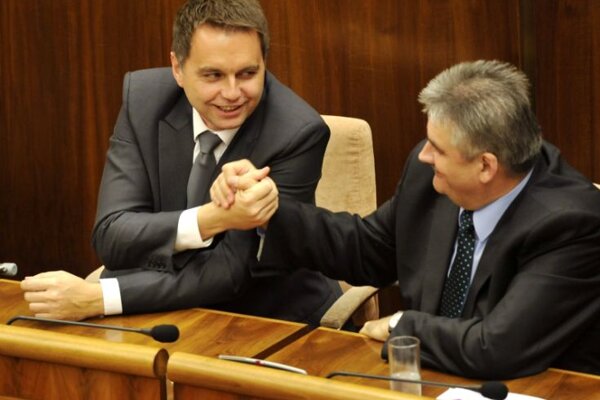 THERE was little drama as the state budget for 2014 sailed through a parliament dominated by the ruling Smer party on December 12, with all the 81 Smer deputies present voting in its favour and nearly all members of the opposition opposed. However, the government’s commitment to deficit targets, along with the means through which it plans to achieve these goals, will test how waterproof the coffer plan, tailored by the department of Finance Minister Peter Kažimír, is.

During four days of debate, the opposition parties slammed the government for what they insisted would be less dedication to health care, education and social affairs while spending more on its own operations. Kažimír dismissed the criticisms and accused the opposition of calling for saving public funds without ever specifying where or how.

“The budget for the years 2014 and 2016 creates a ground that on one hand we reduce the deficit and on the other hand support economic growth, the growth of employment and improve the living standards of people in Slovakia,” Kažimír said in an official statement released just after the budget passed.

The budget plans for a public finance deficit of 2.64 percent of GDP next year. The plan relies on what the Finance Ministry says will be an additional €375 million in taxes collected next year compared to estimates made as recently as September.

The ministry introduced its new tax collection forecast on December 2, which boosted the ministry’s planned revenues to €14.108 billion, after which it adjusted spending to €17.392 billion, with the budget deficit being lower by €102 million compared to the previous draft at €3.283 billion, according to the ministry’s release.

The ministry said that to curb the public finance deficit to 2.64 percent, a successful fight against tax evasion will be key.

Shortly after the vote, Kažimír nevertheless added that economic growth will still be tenuous next year, but insisted he was confident that the pressures on the growth of state debt will be weak, the SITA newswire reported.

Chairman of the Slovak Chamber of Trade and Industry (SOPK) Peter Mihók said he was positive about what he called “the government’s intention to gradually decrease the tax burden of the businesses, mainly the corporate income tax, with an effort to get to pre-crisis levels”, TASR reported.

“The budget is an image of the government’s inactivity this year, which has missed out on yet another year for the preparation of reforms with the goal of reducing ineffective spending,” said Radovan Ďurana, an analyst with the think-tank INESS, when asked by the Sme daily.

The parliamentary debate over the state budget lasted almost 24 hours in real time with opposition parties criticising the draft state budget for introducing new taxes and easing public finance consolidation efforts. Slovak Democratic and Christian Union (SDKÚ) deputy and former Finance Minister Ivan Mikloš on December 5 stressed that the government does not know how to be thrifty and he sees the main problem in the structure of consolidation the government has chosen: “The government does not know how to save on itself; it only knows to hike taxes for people”.

Mikloš criticised what he called the road of one-time measures, which do not lead to the long-term sustainability of public finances. He pointed to the level of structural deficit, cleaned of cyclic influences and one-time effects, SITA reported.

Juraj Miškov, former economy minister and now an independent deputy, slammed the tax license plan, which Prime Minister Robert Fico’s government introduced earlier, requiring limited liability or joint stock companies to pay an annual fee regardless of whether or not they make a profit.

Miškov argued that the government, by similar steps, is making the life of honest businesses more complicated while doing nothing to improve the business environment. “You are suffocating our small Slovak firms, which barely survive, but at the same time you are doing nothing, absolutely nothing to attract foreign investments and to help create new jobs”, he told SITA.

The parliamentary discussion was not lacking in theatrical gestures such as that of former Labour Minister Jozef Mihál of the opposition Freedom and Solidarity (SaS) party, who said if he happens to be wrong about his predictions that the ministry will have to revise the budget in the spring, he would grow a beard by June.

SDKÚ Deputy Ľudovít Kaník, who lost his bid for governor of Banská Bystrica Region in the run-off to extremist Marian Kotleba, gave a pre-Christmas gift of a roulette wheel to Kažimír, as he believes that the 2014 draft budget boils down to the government betting on the Slovak economy’s development, TASR reported.

Kaník’s colleague and SDKÚ Deputy Chairman Ivan Štefanec stressed that the state needs better collection of the existing taxes and not new ones, adding that “the numbers clearly show that we have got a problem in direct taxes”.

Kažimír lashed out at the opposition deputies, suggesting that even if they warned that the government has to save money, they did not specify how and where. He also warned that only this year the opposition has submitted proposals that would have deepened the deficit by hundreds of millions of euros.

“This is your way of communication; the lowest possible deficit and debt on one hand, but on the other hand [submitting] proposals which are deepening the deficit,” Kažimír said when wrapping up the parliamentary debate, as quoted by the SITA newswire.

Kažimír said he is willing to make a bet that the consolidation result in 2014 will be more positive than what is currently budgeted. The finance minister expects positive results on the fight against tax evasion in the form of higher tax revenues, but he cannot include these in the budget as of yet, he said.

According to Kažimír, improving tax collection is a response to criticisms that the budget is too reliant on one-time saving measures, since the elimination of tax evasion is a structural change that would bring income even in the upcoming years, SITA reported.