Firms can still donate 2 percent of tax to NGOs

CIVIL SOCIETY groups are breathing a sigh of relief after the government agreed to keep the current 2 percent assignation scheme that allows corporate entities to divert a portion of their paid corporate tax to non-profit groups. The decision changes course on what was a planned reduction in the amount that firms could donate to non-governmental and non-profit organisations. 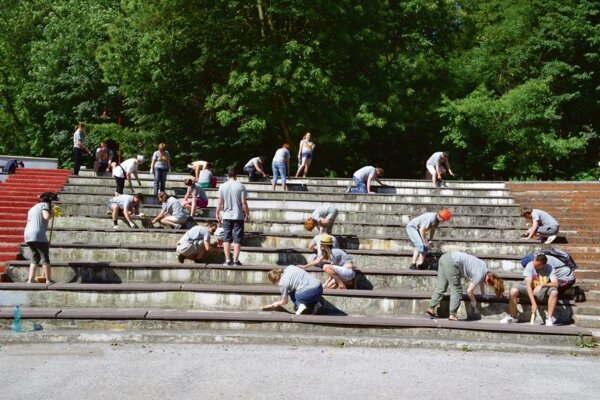 CIVIL SOCIETY groups are breathing a sigh of relief after the government agreed to keep the current 2 percent assignation scheme that allows corporate entities to divert a portion of their paid corporate tax to non-profit groups. The decision changes course on what was a planned reduction in the amount that firms could donate to non-governmental and non-profit organisations.

The Finance Ministry explained to The Slovak Spectator that the current scheme was extended to help ensure that NGOs and non-profit groups can continue to provide publicly beneficial activities, like making improvements to education, drug rehabilitation programmes and environmental protection, as well as providing social help to people in need, among other things.

Organisations from the non-governmental and non-profit sector had warned against the harmful impact of altering the scheme.

“For many organisations not only would the income directly from the tax assignation decrease, but also incomes from various grants of corporate foundations and funds which also use money raised by the 2 percent scheme,” Pavel Hrica, programme director at the Pontis Foundation, a leading NGO, told The Slovak Spectator. “Non-profit organisations would not have any base funds thanks to which they can mobilise the work of volunteers and gain further support.”

Filip Vagač, from the office of the government proxy for the development of the civic society, believes that sticking to the previous scheme would affect the quality of the services provided, either in the social or environmental fields, and also the quality of service, which many non-profit organisations provide to citizens.

Hrica contends that the increase of obligatory donations by 100 percent in order for a company to assign 0.5 percent more of its paid taxes would discourage donations. He estimates if the current assignation scheme is not extended, the sum the civil society groups obtain in this manner would drop by some €7 to €10 million annually. Companies assigned €19.683 million from taxes paid in 2012, the Association of Corporate Foundations and Funds cited the Financial Directorate.

“For the state this [decrease] is a drop in the sea, but for thousands of publicly beneficial activities this is a question of survival,” Hrica said. “Because other forms of support for philanthropy in Slovakia do not exist, it would be very difficult to fill the gap, and this process would be very slow.”

Boris Strečanský from the Centre for Philanthropy specified that the originally planned changes would mean, for example, two companies assigning €1,500 or 1.5 percent of their paid taxes while one of them would also donate €500 to increase its donations to 2 percent, leading to a drop for civil society groups from €4,000 to €2,500.

According to Strečanský, the assignation scheme has the character of so-called indirect state support for non-profit publicly beneficial activities and serves as an indirect tool to compliment direct support carried out via grants and subsidies.

“Indirect instruments are advantageous in the sense that decisions about them are decentralised,” Strečanský said, adding that the chance to influence them politically, contrary to state grants and subsidies, is limited.

Strečanský believes that the assignation mechanism for corporate entities is one of the ways to support civil society groups and such groups are supportive of the existing practices. There were other ways to contribute to such groups, for example, by deducting donations from the tax base, but these were cancelled in 2004 as part of tax reform.

Lucia Faltinová from the Slovak Donors’ Forum views the assignation scheme as a major form of support to the non-profit sector and raising public awareness of philanthropy, but warns that this is not philanthropy.

“The assignation scheme is, however, invaluable in that it enables [companies] to direct funds that would otherwise end up in the state budget portfolio, to go to largely charitable causes,” said Faltinová. “Again though, the scheme is not philanthropy. It is not a criticism, but all too many firms use it to claim philanthropic deeds. I wonder what will happen when the scheme closes down. Will the firms that rely on the income tax designation rethink their philanthropy?”

Contrary to previous years a public discussion about the extension of the current scheme was almost non-existent and the scheme’s extension has not been widely reported in the media.

Intensive negotiations with the Finance Ministry followed. The Pontis Foundation along with other non-profit organisations worked on analyses of the benefits the assignation scheme brings and participated in the launch of the Association of Corporate Foundations and Funds, whose aim is, along with others, to increase ethics and transparency with handling money collected via the assignation scheme.

Initially, the income tax assignment scheme allowed only private individuals to allocate 2 percent of their income tax payments to a chosen non-governmental organisation. Later, the scheme was extended to companies. In 2009, the government changed the corporate scheme to encourage donations by companies from their own profits. Under the altered scheme a company can assign the maximum portion of its corporate tax dues only when it donates money from its own profits; the percentages that should be assigned and donated can vary, but the total should always be equivalent to 2.5 percent of paid taxes.

For the first time, companies had to donate their own money in order to trigger the maximum assignment from their 2010 corporate taxes. Now the plan is to gradually reduce the portion a company can assign to 0.5 percent if the company also donates its own money as of the 2021 tax period at the earliest.

“We should not rely excessively on firms to be the sole philanthropists or on their good will support merely in financial terms,” Faltinová told The Slovak Spectator. “In-kind donations are often equally helpful as are the individual philanthropists, regardless of the state of their bank account. Each one of us has an opportunity to make philanthropy a lifestyle.”

The revision of the law on corporate taxes also enables companies to assign the same portion of the paid tax licence as from the paid corporate tax. Companies will pay tax licenses for the first time in 2015 and the government estimates that it will collect €120 million this way.

“I welcome this possibility, which will enable companies to assign a portion of their tax in spite of negative results and thus to help a good thing,” Vagač said.