'Women need someone to look up to'

ONE OF the earliest role models of Marjorie Maginn, the president and executive director of the Women in Government foundation, was her mother. Maginn’s parents bought and expanded a candy delivering business, which her mother went on to lead. Since all of the children helped with the family business, they quickly learned how a business functions. 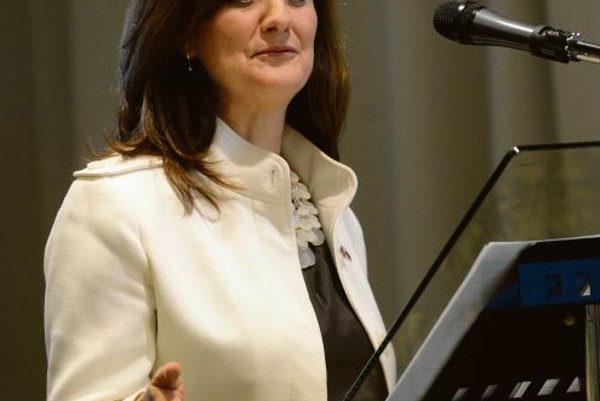 ONE OF the earliest role models of Marjorie Maginn, the president and executive director of the Women in Government foundation, was her mother. Maginn’s parents bought and expanded a candy delivering business, which her mother went on to lead. Since all of the children helped with the family business, they quickly learned how a business functions.

At the age of five Maginn learned from her mother that if she wanted to earn some money, she could not buy and sell candy for the same price, but needed to sell it at a slightly higher price.

“It is wonderful to be introduced from a very young age to business and learn how it operates,” said Maginn, who was one of the speakers at the Women’s Entrepreneurship Forum conference in Bratislava on December 3.

The Slovak Spectator spoke to Maginn about the importance of role models for women entrepreneurs, the mentor-mentee relationship, the salary gap between men and women and the proposal of the European Commission to set quotas for women in managerial positions.

The Slovak Spectator (TSS): During your opening speech at the Women’s Entrepreneurship Forum you stressed the importance of role models. Why do you consider role models so important?
Marjorie Maginn (MM): A role model is someone that, especially at a younger age, you start learning from and you probably emulate them or want to emulate them. You have someone that you can look up to and want to be like. I’ve had some wonderful role models in my life and yesterday I mentioned that my first one was my mother, who was a wonderfully successful entrepreneur and also a really great mother.

TSS: Slovakia is rather short on such role models, as the number of women running their own businesses or serving in executive or other important positions is quite low. Where should women who lack role models in their environment draw inspiration from?
MM: I’m going to disagree with you a little bit. I got to meet several Slovak women who are involved in the steering committee for the Women Entrepreneurship Forum, and I think each of those women are wonderful role models. They have great heart and spirit and drive. I have only gotten to see them at the end of this programme, not at the beginning when they started, but I understand that most of these women did not know each other when they came together. And now they seem to me to be a much more cohesive group.

The programme through the US Embassy that they started is a great way to shine a spotlight on these women and get them better known and get maybe some press about them, some more familiarity around the country with the role models that you do have here. You have some strong ones, you just need to get their stories out, so that others can follow them and be more like them.

TSS: In the case of mentoring, is it important for the mentor to be from the same environment as the mentee? What knowledge can a foreign mentor pass on to a mentee living and doing business in a different environment?
MM: There is probably a trust factor that comes when you have a mentor and a mentee that come from the same community; someone who is active in the community. I think there is more trust and belief that you can do it.

The biggest thing that a mentor can do is help develop the self-confidence in the mentee, to know someone who has gone through the struggles of dealing with the work-life balance, dealing with starting your own business, or how to promote yourself within a business.

Developing the self-assurance that you are smart enough and strong enough and you can do that role. Someone who encourages you along - that is the reason and the role for a mentor.

TSS: A lack of self-confidence among Slovak women is cited as one of the reasons behind the low number of women entrepreneurs in the country. What can the state, society and women themselves do to boost the self-confidence of Slovak women, and thus better prepare them for starting a business?
MM: What I have learned so far about your country and about the women in the country is they seem to be very educated. To continue to take advantage of any educational opportunity is the first building block. To make sure that you understand the issues and are staying current on what’s going on, policy-wise in your country. And then networking with others in the community to get your ideas out there, help develop your roots for your positions and work that way to help to start overcoming any barriers of feeling inferior. If we’re educated and knowledgeable we have nothing to fear.

TSS: In the US, similar to Europe, many women are more educated but earn less than men. What are the reasons behind this gender imbalance in the US? Is anything being done to address it?
MM: In the US women are still not on equal power with men as far as wages. We still have work to do in the US to make it even, or maybe even women should earn a little more. Why not? (laughs) But in all honesty, it comes from women’s self-confidence. In most positions in the US you can negotiate a little bit on the beginning wage. Not for someone in a service position, that is a flat hourly sort of paid arrangement. But when you start in a professional position, there is a range usually for the employer. He has an amount of money set aside and most employers are going to tell the employee the lowest level to hire them. And most women, if they are offered the position, they will say “Thank you” and they will start at that salary. But most men maybe are a little more astute, that you can negotiate the salary and feel a little more self-confident to say, “I would need to make a little more than that” and throw out maybe a 10-percent or 15-percent higher range and negotiate at that level. We find in the US that women start slightly lower than men right at the beginning of their employment, so they are always behind, even as they move up the employment ladder.

I would love to help educate women that, on the employment side, make sure that you are from the very beginning starting where men are. If you do not start at the same level, then you will never catch up.

TSS: How do you perceive quotas for women, either at the national or EU level? What is the situation in this respect in the US?
MM: It is wonderful that we are working on ways to improve the number of women who are employed at certain levels or positions. It is extremely important that we get women in those positions. But setting quotas I don’t believe is the correct way to go. One thing that we do in the US to try to encourage women entrepreneurship and the hiring of women is we offer some tax advantages to the companies.

I would like to see another way for us to encourage and promote businesses that are employing women instead of forcing them to hire a woman. I want to have them excited about doing it, and therefore they go out and seek these great candidates on their own. I don’t think any of us like being forced to do something. But if you put that goal out there, then we all want to reach it, especially if there is some sort of advantage fiscally or otherwise tied to it.