Norwegian cuisine: Treat from the kingdom of salmon

SALMON lay their eggs in fresh water, where they develop only to later migrate to the open ocean, where they become sexually mature and then return to their natal streams to spawn, where most of them die. The Norwegian Ambassador to Slovakia, Inga Magistad, finds the natural life-cycle of salmon fascinating, and even though today one of Norway’s primary exports is being bread in large salmon farms, she says that traditional salmon fishing is still very popular with many Slovaks who go fishing in salmon rivers along Norway’s coasts in the autumn. 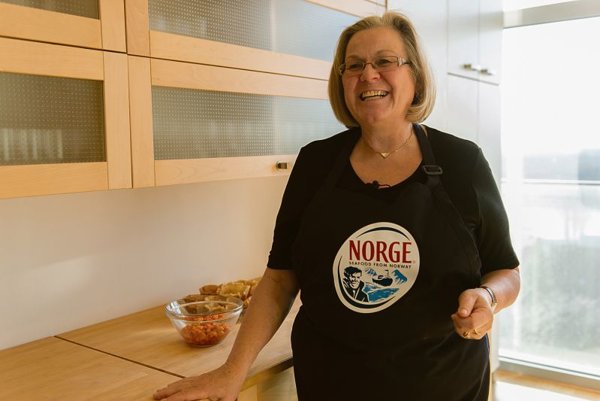 To leave no doubts about one of Norway’s most iconic food products, Magistad picked salmon mousse for the starter for the Cooking with Ambassadors programme, prepared by The Slovak Spectator and TV Sme.

“Salmon is a very good and easy fish,” Magistad said, adding that it can be consumed raw, for example, in the form of sushi, and “one can poach it, fry it or we can have it smoked or marinated. It is a very versatile fish and I suppose this is why it has such a big market”.

Magistad, whose homeland is the number one exporter of salmon, is glad that all the Slovaks whom she has hosted so far have liked the fish.

“We have always put a lot of emphasis on fish, because we are a fish-loving nation and so if you have several courses, at least one or two should be fish,” Magistad said when explaining why she added cod, one of her favourites, to the menu. “It is a very pure, healthy and lean fish, while also very traditional in Norway.”

The Norwegian ambassador poached the fish in water with salt and laurel leaf with a little pepper and some lemon to represent what she believes is one of the characteristics of the cuisine of her homeland: pure and natural flavour.

According to Magistad, in the past people in some parts of Norway were not as passionate about eating fresh fish as they are today, since fresh fish is now available all over the country, even inland. In many parts of Norway, fish used to be salted and dried to be eaten year round.

Childhood memories were at play when Magistad chose reindeer sirloin for the main dish of the Norwegian menu: her grandfather had a hotel in the mountains and also had a herd of reindeer roaming around in the wilderness, looked after by herdsmen, though the animals are not wild.

“We always had reindeer for festivity; grandma loved it,” Magistad said, while adding crushed juniper berries and brown cheese made of goat and cow’s milk to the sauce to go with the game meat. “This dish always brings back fond memories of my childhood. I think it’s special.”

To complete the festivity of Norwegian flavours, Magistad also served a dessert with lingonberries, which come from Norway, as they do not grow in Slovakia: “they have a strong and very special taste and are picked only in September in the far north, so you don’t get it here in Europe”.

When asked about her experience with Slovak cuisine, Magistad recalled an occasion when she was invited to dinner by a Slovak family who served her a potato pancake filled with goose liver, which she described as “wonderful”. She has also tried bryndza, and given her appreciation of all things cheese, she liked it a lot.