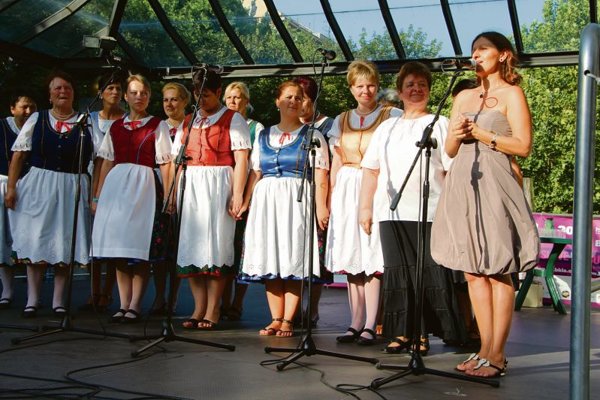 Minorities will get money for culture under new rules. (Source: Courtesy of In Minori)
Font size:A-|A+

THE SYSTEM for financing minority cultures will change for the second time since Prime Minister Robert Fico’s second government took power in 2012.

While former government proxy for national minorities László Nagy changed the scheme for distributing money to minority groups in early 2013, making funds proportional to the number of members, criticism of the scheme led members of the Committee for National Minorities and Ethnic Groups to clear new rules at their November 13 session. The new plan still ties financing to the size of the minority groups, but also takes into account the number of people using the affiliated national language as a mother tongue and whether or not the group has its own country.

In addition to this, representatives from officially recognised minority groups passed changes to the status of the committee, reducing the number of votes to one vote per minority. While the Office of the Government Proxy for National Minorities says it will bring more equality to committee members, some minorities have criticised the change, saying that it runs contrary to the status quo promised in the government’s programme statement.

“The proposal takes into account several criteria with the aim of transparent and fair redistribution of money,” reads a statement from the Office of the Government Proxy for National Minorities.

Moreover, the final financial contribution will include an invariable sum of 8 percent of the money allocated by the government, but not less than €25,000. Representatives from 11 of 13 national minority groups agreed to the changes.

Géza Tokár from the Round Table of Hungarians in Slovakia however has criticised the changes and argues they lack transparency. He maintains that the new plan would require “better controlling mechanisms, making expert decisions within the commission and not changing these decisions without reason”.

He explained he wanted to correct the anomalies from the past when big minorities received less money per member than smaller ones, the Sme daily reported in January 2013. While Hungarians and Roma received more funds, other groups have seen their state support shrink by thousands of euros. Minorities will receive €3.83 million next year, as compared to €4.25 million in 2013.

The Round Table of Ruthenians in Slovakia (OSRS) welcomed the new system, saying that the rules are based on its own proposal, especially the suggestion to take into consideration the mother tongue of people and whether the minority has a homeland. Among the officially recognised minority groups, only Ruthenians and Roma do not have any homeland from which they can claim funds, OSRS spokesman Peter Medviď told The Slovak Spectator.

Yet, the OSRS still criticises the system of financing through grant programmes, as it takes a long time for minorities to get money for their projects. According to Medviď, a better solution would be to finance the minorities directly from the state budget.

Also, other minorities point to weaknesses in the new system. Agnes Horváthová from Romano Kher, who represents the Roma minority at the committee, said that it would be better to get data about the number of Roma from the Atlas of Roma Communities, rather than the census, as its data is more accurate.

Stane Ribič from the Club of Serbians in Slovakia considers the census to be weak as well, arguing that although the size of minorities changes each year, nobody will take these changes into consideration when deciding over the funds.

Moreover, Ribič considers the minimum sum for minorities too low, if the minority wants to operate normally, arrange festivals and run a publication, like a magazine. The minimum amount should oscillate between €35,000 and €40,000, he told The Slovak Spectator.

One minority, one vote

According to new status of the committee, passed by 10 of 13 national minorities, every minority will have only one vote, regardless the number of minority representatives. This means that instead of 24 members having the right to vote (with Hungarians having five votes, Roma four votes, Czechs, Ruthenians and Ukrainians two votes, and the rest one vote), one minority will have only vote vote, regardless the number of members in the committee. This change will “contribute to balance in decision-making over issues related to the national minorities”, according to a statement from the Office of the Government Proxy for National Minorities.

Ribič, who authored the proposal, explained that “every minority should be equal at the committee”, which was not possible if some had more votes. Representatives of Hungarians, Roma and Ruthenians however disagree with the changes, saying that they will harm them.

It is not objective if only one person represents a national minority that has 500,000 or 430,000 members, said Horváthová, adding that in that case there should also be only one representative for each minority sitting in the committee.

“The aim of the Government Office is absolute degradation of the committee and liquidation of uncomfortable opinions at this level,” Tokár of the Round Table of Hungarians in Slovakia told The Slovak Spectator.

Moreover, the changes will allow smaller minorities, whose needs are absolutely different from the ones of bigger minorities, to decide over discussed agenda, Tokár added.

Some representatives of minorities even sent an open letter to Foreign Minister Miroslav Lajčák, chair of the Government Council for Human Rights, National Minorities and Gender Equality, asking him not to accept the changes.

The Government Office however stressed that the changes were cleared by representatives of the national minorities.

“This means that the interests of national minorities are not harmed, but equalised,” the Government Office said, as quoted by the TASR newswire.

A SMALL coffin bearing the sign “small schools” was the symbol of around 350 protesters in front of parliament who disagreed with the passage of the School Act revision on December 4.

The revision set limits on the minimum number of pupils per class, which puts an end to small schools with fewer than 13 students per class due to state funding cuts.

According to critics, the new legislation forces pupils with non-Slovak mother tongues to learn in Slovak since many small classes are focused on teaching in a different language.

The new legislation requires elementary schools to create first-grade classes with at least 11 pupils, second to fourth grade classes with 13 pupils and classes from fifth to ninth grade with at least 15 pupils. Secondary school classes should have at least 17 students. The maximum number of pupils will be 22 from first to fourth grade and 29 from fifth to ninth grade, according to SITA.

The Education Ministry expects that 27 of 110 small elementary schools with less than 13 students will disappear because of the amendment, the Hospodárske Noviny daily reported. However, it also argues that setting a minimum number of students per class should increase the effectiveness of school management, according to a ministry report.

Moreover, rules will be less strict for schools in villages where classes are taught in foreign languages. For example, the 11 children threshold in the case of first-grade classes will decrease to nine children per class, according to Hospodárske Noviny.

Nevertheless, cancelling small classes will negatively affect minorities, according to Ondrej Dostál, a former MP and the head of Civil Conservative Party (OKS).

“We cannot see issues of minorities’ policy just from an economic perspective because education, culture and language are the most important things for preserving ethnic identity,” Dostál said, as quoted by SITA.

Érsek also complained that Education Minister Dušan Čaplovič, through this revision, will effectively close schools in villages but has not yet specified whether transportation will be provided for children forced to study elsewhere.

However, in cases when children would have to travel more than six kilometres to another school, the revision makes an exception for such schools to have classes below the minimum level, according to SITA. The same is true when more than 80 percent of children in a class come from a socially disadvantaged environment.