PUTTING an end to months of speculation, Prime Minister Robert Fico made his plans to run for president next year official during a public ceremony that doubled as a speech reviewing the year and previewing 2014 plans for his government. 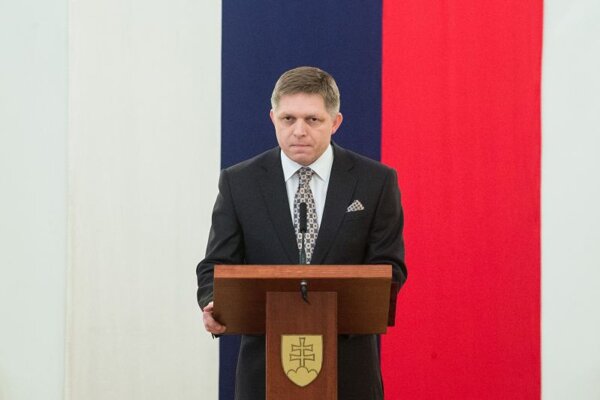 PUTTING an end to months of speculation, Prime Minister Robert Fico made his plans to run for president next year official during a public ceremony that doubled as a speech reviewing the year and previewing 2014 plans for his government.

“I understand my candidacy as a service to Slovakia,” Fico said during his address delivered to media, members of his government, members of parliament and foreign diplomats accredited in Slovakia.

“I’m going to run for the post in a full political condition,” he added.

Fico criticised the EU for being unstable and drew the picture of a potential Slovak government unable to cooperate with the president. He noted that none of the existing candidates appear to be interested in a dialogue with the Smer government.

Fico practically launched a campaign with these statements, as well as by stressing that the country’s right-leaning parties are disintegrating, leaving it to his party to guarantee political stability.

A recent phone poll by Polis polling agency suggested that 23.9 percent of the respondents wish Fico run for presidency as the candidate of the Smer party while 14.3 percent wished to see Foreign Affairs Minister Miroslav Lajčák run instead, the SITA newswire reported on December 17.

Leader of the opposition Christian Democratic Movement (KDH) Ján Figeľ responded to Fico’s announcement that 2014 might become a year of political breaking point, with the results of presidential elections either a kind of Pyrrhic victory or a personal defeat adding that Vladimír Mečiar made a similar trial [to get elected president] twice and “we have defeated him repeatedly”, SITA reported.

Observers have several times suggested that for the sake of power balance in the country, the next president should not be close to the ruling party, which already controls the posts of prime minister and speaker of parliament.

“We are not obliged to apologise to anyone for our victory in the elections in 2012,” Fico said on December 7 in addressing such concerns. He has argued that the president considerably contributes to the stability in the state while suggesting that “harmony between the president, speaker of parliament and prime minister is the basis of such stability”.

The current President Ivan Gašparovič was elected for his second term with the backing of Smer. Observers expect that Gašparovič will endorse Fico’s candidacy.

“I welcome the prime minister’s candidacy, because it reveals the leitmotif of the presidential election,” Radoslav Procházka wrote in his official statement reacting to Fico’s announcement. On one side stand efforts for generational and moral renovation of public service in Slovakia, he said, and on the other side stands an attempt of the exhausted political generation of the 1990s to secure their positions in the state forever.

“People will choose, my offer remains unchanged: a strong president who will be a counterweight to the political parties,” he said.

Fico, now in his second term as prime minister, will turn 50 next year, when the presidential election takes place. If elected, he would be the youngest ever Slovak president. He was born in 1964 in Topoľčany and in 1986 graduated from the Comenius University’s law school. He is married, with one son.

Fico worked at the Law Institute of the Justice Ministry after graduation, and also served as an agent representing Slovakia in front of the European Court of Human Rights and the European Commission for Human Rights. He was politically active from a young age, joining the Communist Party of Slovakia in 1987. After the Velvet Revolution, he became a member of the Slovak Democratic Left (SDĽ) party, and became deputy chairman in 1998. In 1992 he was first elected MP. In 1998, Fico ran for the post of the general prosecutor, but his party endorsed another candidate instead, arguing Fico was too young.

That same year, election brought down the government of Mečiar and SDĽ joined a ruling coalition of four parties led by the Slovak Democratic Coalition (SDK). Fico received the biggest number of preferential votes among party colleagues.

In 1999, Fico left the party saying he was disappointed with the way the government worked and acted as an independent MP until the 2002 elections. Almost immediately after leaving SDĽ, however, he founded Smer party, which he first labelled a party of the third way.

Between 2002-2006 Smer was the main opposition party in the Slovak parliament. In 2004, it swallowed up nearly all the leftist parties active on the Slovak political scene, including SDĽ.

In 2006, Smer won the elections with more 29 percent of the vote and entered a coalition with two small parties: Mečiar’s Movement for a Democratic Slovakia (HZDS) and the nationalist Slovak National Party (SNS). This brought heavy criticism to Smer from European partners, and the Party of European Socialists (PES) in the European Parliament suspended Smer’s membership until February 2008. Fico’s first term as a prime minister was marked by the country’s entry into the eurozone, but also by several big scandals, including the so-called bulletin-board tender and a murky emissions quota deal. Both incidents cost the country millions of euros.

In 2010 Smer received more 34 percent of the vote, but was outnumbered in parliament by a collection of right-leaning parties. Fico and his coalition were replaced by a coalition of four rightist parties led by Prime Minister Iveta Radičová.

But it was not long before Fico returned in full force, as he helped engineer the fall of Radičová’s government leading to early election in March 2012. Smer won an outright majority of 83 seats in parliament and became the first party to rule alone, without the need for any coalition partners since 1989.

The election must take place at least 60 days before the term of the incumbent’s presidential term elapses, which in this case is June 15, 2014. In Slovakia, elections are traditionally held on Saturdays, which means the latest possible date for the first round of the election is April 12, 2014. Smer might want to push the first round of the elections to the latest possible date, the Sme daily reported, quoting a source from the Smer leadership.

The list of other candidates who have thus far confirmed the will run include Pavol Hrušovský backed by the KDH and Most-Híd; businessman Andrej Kiska, running as an independent candidate; Ján Čarnogurský, a former chair of the KDH; Peter Osuský from Freedom and Solidarity (SaS); independent candidate Radoslav Procházka, lawyer and formerly a member of the KDH; Milan Kňažko, one of the leaders of the Velvet Revolution and a former government official who will run as an independent candidate; Gyula Bárdos of the Hungarian Community Party (SMK). Leonid Chovanec, Jozef Behýl, Milan Melník, Jozef Šimko and Ľubica Blašková have also announced their candidacies.

The Slovak Democratic and Christian Union (SDKÚ) is the only one of the major parties that has not announced who they will support as yet.