The centre of the Empire

Bratislava’s advantageous location on the banks of the Danube, and its close proximity to Vienna and Budapest, has made it one of the most important cities in central Europe for hundreds of years, especially during the period of the Austro-Hungarian Empire. 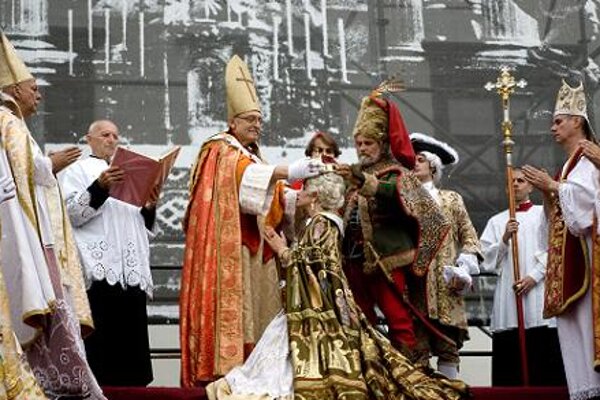 Bratislava’s advantageous location on the banks of the Danube, and its close proximity to Vienna and Budapest, has made it one of the most important cities in central Europe for hundreds of years, especially during the period of the Austro-Hungarian Empire.

Indeed, the single most significant period in Bratislava’s history was from 1563-1830, when it became the coronation city of the Hungarian Kingdom.

At the time, Bratislava was a well-developed, multilingual city, with a population comprised of majority of Germans and solid minorities of Hungarians and Slovaks. Society was divided into several classes: the upper aristocratic class provided the secular and ecclesiastical authorities, but the middle and lower classes remained strong, comprised as they were by the craftsmen and merchants crucial to the city’s business development, as well as servants and manual labourers. There were many job opportunities in Bratislava, and in local vineyards, and it attracted workers from far and wide.

CAPITAL OF THE EMPIRE

Bratislava’s fame rapidly grew after the Battle of Mohács in 1526, when Sultan Suleiman I defeated King Louis II of Hungary. In the aftermath of the battle, the Ottoman army occupied the Hungarian capital Buda as well as the primary coronation city of the Empire, Székesfehérvár. In 1543, the displaced rulers of a newly-founded empire turned to Bratislava to be its capital. It was besieged by Ottomans, but never conquered.

In 1563, the new King Maximilian II became the first Hungarian monarch to be crowned in St Martin’s Cathedral in Bratislava, and the church would continue to serve the same function for almost 300 years. Even today, it still has a 300kg gilded copy of St Stephen’s crown (the Holy Crown of Hungary) at the top of its cathedral tower.

After the era of coronations in Bratislava ended, the crown jewels were moved from the city. At the moment, the original crown is in Hungary, while Bratislava has only a copy.

The gothic cathedral is now one of the most popular sights on the Bratislava tourist trail, and contains numerous fascinating artefacts in its main building and catacombs. There is a permanent exhibition of relics and liturgical objects that were once used in the coronation ceremonies, as well as a list on the cathedral wall of the 19 monarchs – ten kings, one queen and eight consorts – who were crowned here.

The only queen on the list is, of course, Maria Theresa, who was crowned in 1741 and would become one of the most significant figures in central European history. Maria Theresa acceded to the throne after the death of her father, Charles III, and only after he had successfully campaigned for what became known as the Pragmatic Sanction of 1713, which allowed a female to inherit the possessions of the Habsburgs.

Although Maria Theresa took charge of the empire when it was still recovering from the plague epidemic of 1712, and her rule was blighted by conflicts in the region, including the war of Austrian Succession (1740-48) and the Seven Years’ War (1756-63), her influence over the empire was largely positive. Bratislava, in particular, underwent a period of significant economic and social improvement.

“Maria Theresa is interesting for being an enlightened ruler; she made several appealing changes,” said the historian Pavel Dvořák. “For example, she introduced compulsory school attendance and forbade torture.”

These days, the royal history of Bratislava is best remembered by the annual coronation march through the city, which remains as close as possible to the route taken by the Hungarian monarchs on their coronation day.

The new monarch would have led a parade on foot through the streets, via the Main Square and past Maximilian’s fountain, which was placed there in 1572. The tour continued into the Franciscan Church, where the king or queen would confer on selected noblemen the prestigious Order of the Golden Spur.

The procession would then proceed along Michalská Street towards Michael’s Gate, where the monarch would climb aboard a waiting charger and gallop to the coronation mound on the banks of the Danube. He would wave his sword to the north, east, south and west, promising to defend his kingdom from all directions.

In those days, the route would have been covered by red canvas, which was torn down by citizens after the celebration.

Today’s residents of Bratislava get to enjoy the festivities every year, in June, when actors play the parts of the courtiers and monarchs, dressed in period costume.

“I think it is good that Bratislava remembers its history,” said Dvořák. “A lot of buildings from that era have been demolished, such as the towns’ gates, and old buildings have been replaced by new ones. There were even plans to bring down Bratislava Castle during the first republic [1918-1939]. This is why it is very important to recall the glorious times of Bratislava.”