CHARACTERS from primary school textbooks virtually never make news. But a recent exception has drawn the ire of groups that claim to defend the idea of a traditional family. 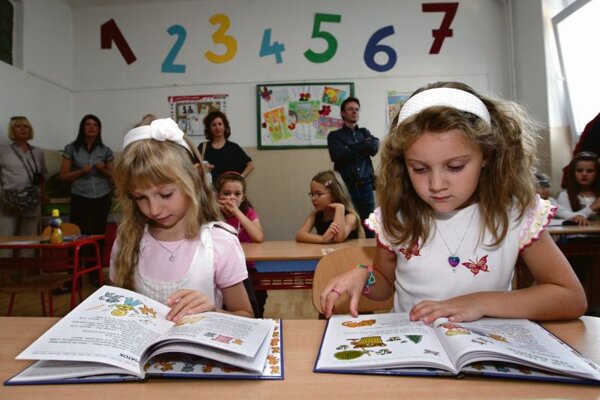 CHARACTERS from primary school textbooks virtually never make news. But a recent exception has drawn the ire of groups that claim to defend the idea of a traditional family.

Authors of the Lipka phonics book (one of three primers currently approved by the Education Ministry and used at Slovak schools) introduce every letter of the alphabet with a matching story. The now notorious star of the book, a neighbour named Žubajík, comes from a story related to the letter ‘Ž’. He comes to help out in the household of a divorced mother with one son. The boy grows up without a father, until his mother agrees to marry Žubajík.

Putting the example of a divorced family in the book provoked criticism from traditionalists. Later, their complaints were backed by the Catholic Church. While they claim that there is no room in a textbook for six-year-olds for such topics, the authors of the book claim divorce is a daily reality for many children and as such cannot be ignored.

The debate urged the Education Ministry to hold talks with both sides of the dispute, as well as with experts on primary education. Within a working commission they drafted three options to solve the dispute, ministry spokesman Michal Kaliňák told The Slovak Spectator. Either the primer Lipka will be withdrawn from schools altogether; or the criticised text will be replaced with a “more appropriate” example, or the schools who no longer want to use this primer return it and select one of the other two available primers.

The final decision is now up to Education Minister Dušan Čaplovič. Kaliňák was not able to say when the minister will make a decision when asked by The Slovak Spectator.

The publisher of the primer argues that the divorce rate in Slovakia reached up to 52 percent last year.

“Let’s not cover our eyes from the reality, children have classmates whose parents are divorced,” Miroslav Sedláček, a representative of the Aitec company, the publisher of the textbook, told the Sme daily.

By using the story of a divorced family in the primer, the authors wanted to “give them hope that they too can once again live in a complete family”. Gabriela Futová, one of the co-authors of the primer, sees no problem with the article about a divorced mother and her neighbour-turned-suitor Žubajík.

“The whole textbook is oriented pro-family,” Futová told Sme, adding that there are children depicted in it from complete families as well as children with single parents – just like in real life.

Although admitting that divorce and single families are far from rare, Ján Horecký, the director of the Joined School of St Francis of Assisi and president of the Association of Catholic Schools, sees the bone of contention in the dispute whether the children should be taught about the reality, which is not always ideal, from such an early age.

A primer is a textbook that should teach children to read and write and as such it should not feature any topics that are controversial, he argued in an interview with The Slovak Spectator. Those should be left for religion, ethics, or social science classes. A primer should show things that are undoubtedly good; offer ideals, not controversies, said Horecký, who represented the Association of Catholic Schools as well as the Conference of Bishops of Slovakia (KBS) in the talks at the ministry.

The Lipka primer however offers a reflection of reality rather than ideals. Horecký said he recognises the good intentions of the authors of the book and their good faith that such articles provoke children to discuss with their peers and with the teacher, to express their own, independent opinions and attitudes.

“This is where we conceptually differ very much,” Horecký said. “We believe that a six- or seven-year-old child really is not independent in opinions and attitudes, but needs leadership. Not only information, but also education, formation.”

Children need to know the ideals before they are confronted with the life that is not always ideal, Horecký insisted. Additionally, children from divorced families, who do not experience the functioning of the complete family at home, need the message that there it is a good thing for a family to stick together.

“We don’t want to describe reality and say that’s where it ends, thus somehow backing off of education,” Horecký said, adding that the whole issue goes beyond the one particular textbook and is about a whole approach to education at schools.

At the same time, Horecký insists the purpose of the groups he represents is not to stigmatise the children and parents of divorced families. Anton Chromík from the Alliance for Family made a similar argument when speaking to The Slovak Spectator, saying in addition that the textbook fails to note that divorce is a traumatic experience.

Looking at the law

The fact is, however, that the textbook is composed in line with the requirements set out by the State Educational Programme, regarding both content and methodology, Kaliňák said. It respects the general and specific aims of education, as well as the latest trends in education, observing social correctness, he added.

The primer was evaluated by nine lectors and all of them recommended it be published, according to Kaliňák. Still, some Catholic and other organisations insist that efforts to protect the model of the traditional family must continue.

In mid-December, some two dozen Christian organisations united to create the Alliance for Family, to promote this aim. They refer to the massive support of the March for Life, the first-ever pro-life march in Slovakia that took place at the end of September in Košice. They believe politicians should not remain deaf to the people calling for more support for marriage and family as “the ideal space for bringing up children”.

“There are tendencies and efforts to redefine family, make it equal with various alternatives, give the name of marriage to other bonds, thus degrading it,” said Chromík, a co-founder of the Alliance.

If politicians fail to respond, the Alliance does not rule out initiating a referendum to secure better protection for family in the form of a constitutional definition of marriage as a bond between a man and a woman; a ban on same-sex registered partnerships, and making adoptions available only to complete families.

Chromík said the family is the basic cell of society and state, and it should thus be mainly in the interest of the state to promote functioning families, “because they bring a new generation which allows for reproduction and further functioning of the state”. If talking to politicians, which is the first step the Alliance wants to take, proves to be in vain, people “have the right to decide, even in the form of a referendum”.

A similar referendum, defining marriage as between men and women, took place in early December in Croatia. The government there might be obliged to change the constitution accordingly.

“Croatia is an example for us, but also a warning,” Chromík said, noting that politicians have thus far ignored the referendum.

The Foreign Ministry, which oversees the human rights agenda in the government, stated that family is sufficiently protected by the constitution and both international and national laws. Besides, the basic rights and freedoms cannot be the subject of a referendum, ministry spokesman Boris Gandel told Sme.

Conflicts between the proponents of the traditional family and gender equality and LGBTI rights advocates have escalated over the past year. The Foreign Ministry fell prey to a hateful campaign for promoting the LGBTI rights agenda as part of the draft human rights strategy, which was subsequently postponed until next year. More recently, the Catholic bishops caused outrage among their opponents but also among Catholics after they wrote a strongly worded pastoral letter which was read out loud in Slovak churches on the first Sunday of December, calling gender equality efforts “the culture of death”.