WHICH city or town can deserve the title European Capital of Culture more than one that comprises not only one culture but rather several ones, combining and entwining to create a distinctive blend that gives a completely unique quality? In Košice, apart from Slovak culture, there has also been Hungarian, Ukrainian (and/or Ruthenian) and Jewish culture strongly represented historically, resulting in a particular atmosphere and culture. Košice’s name in Hungarian is Kassa and in German, Keschau. 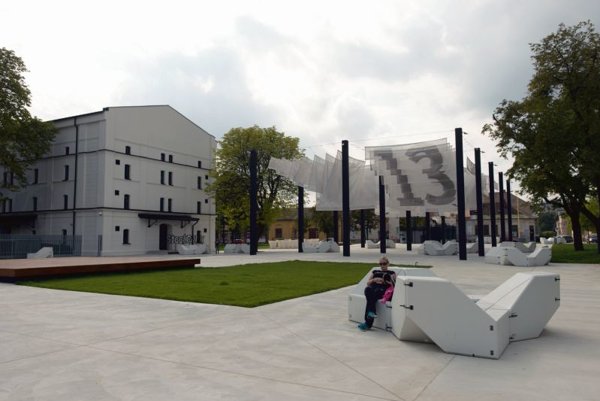 WHICH city or town can deserve the title European Capital of Culture more than one that comprises not only one culture but rather several ones, combining and entwining to create a distinctive blend that gives a completely unique quality? In Košice, apart from Slovak culture, there has also been Hungarian, Ukrainian (and/or Ruthenian) and Jewish culture strongly represented historically, resulting in a particular atmosphere and culture. Košice’s name in Hungarian is Kassa and in German, Keschau.

Throughout 2013, this metropolis in eastern Slovakia shared the title European Capital of Culture (ECOC) with the French port city of Marseilles. The title is awarded each year to two European cities. Košice secured its title in September 2008 to represent the ‘new’ EU member countries while Marseilles was selected to represent the original EU-15 member states.

From the opening ceremony on the weekend of January 19-20 to the closing events between December 10 and 15, the ECOC programme in Košice offered a series of events, projects, contacts, and cultural exchange with Marseilles and even more: changing the atmosphere, the feeling, and the impression of Košice for local residents as well as how it is seen in the extended world. The question comes, naturally, how well the potential offered by the title was used and how much of it will remain for years to come – as many of the projects and programmes were projected to last longer than just one year and to have a permanent impact on the community.

Košice mayor Richard Raši said that ECOC 2013 was concluded only symbolically in mid December. “In fact, we will continue in 2014 with what we started this year,” he told TASR. He stressed that the city is gradually changing from an industrial one into a creative one.

Vladimír Beskid, the art director of the non-profit organisation named Košice 2013 (which managed the ECOC 2013), sees the success of the programme in the fact that all investment projects were finished and a new platform for communication in a wider European space was created, as well as involvement of local community projects within the SPOTs initiative. He added that the biggest success will be if cultural formats like Sound City Days, White Night, Use the City, New Dance Days, the Triennial of Contemporary Art and others will continue into the future as well.

The guarantor for the continuation of the launched projects should be the new, partially-subsidised organisation called K-13 Košické kultúrne centrá (Košice Cultural Centres), which are local cultural hubs built or reconstructed during the year – like Kunsthalle (The Hall of Arts), Kasárne/Kulturpark (the Barracks/Culture Park), SPOTs, and the Amphitheatre that will further develop and house activities stemming from ECOC. On December 16, Ján Kováč was appointed the head of K-13 to start as of January 1, 2014 – selected based on a public tender by the city parliament, TASR wrote.

Among the events included in the closing ceremony of ECOC 2013 were the world premiere of a contemporary Slovak opera, 66 Seasons (composed by Marek Piaček as inspired by a documentary movie of the same name by Peter Kerekeš, which narrates the stories of 66 seasons at the Old Swimming Pool in Košice that operated from 1936 to 2002, and directed by Sláva Daubnerová); the Light of Understanding concert taking place simultaneously in the Jewish Synagogue and the Evangelical Protestant Church, as well as a concert of traditional songs of the Ruthenian minority that were recorded in 1950s in the United States by the mother of Andy Warhol, Julia Zavacká-Warhol, of Ruthenian origin, the SITA newswire wrote.

A 2-in-1 concert by Slovak and French musicians also marked the symbolic takeover of the ECOC title by Aive Rosenberg, programme director of the Latvian capital Riga which will follow in Košice’s steps in 2014. Representatives of the Swedish city of Umea, the other European Capital of Culture for 2014 apologised for not being able to attend the ceremony, TASR wrote.

However, just recently ECOC Košice was tainted in that an audit carried out by the Office of the Košice City Main Auditor found serious shortcomings in the way that the independent organisation managing Košice European Capital of Culture 2013 has been operated over the past year. According to the audit’s findings, in some cases services were purchased without tenders even though standard public procurement processes were required under the law because of the sums involved. The audit report also noted that many invoices did not provide adequate information on the extent of the services rendered.

The organisation’s director, Ján Sudzina, rejected the audit report and refused to sign it. He maintains that there were only formal shortcomings that had already been remedied and that the law on public procurements was not violated. The chief auditor for Košice, Hana Jakubíková, has submitted the report on the audit findings to the Košice City Council.

Mikuláš Jesenský – the Košice-based reporter for the Sme daily – wrote that it remains a question how the “most-translated global writer at the break of the 20th and 21st centuries”, Sándor Márai (a Košice native writing in Hungarian), who deemed Košice a European city long ago, would assess its one-year stint as the European Capital of Culture. The reporter also wrote that Márai, together with film director Juraj Jakubisko, artist Gyula Kosice and architect Ľudovít Oelschläger, are considered to be the Personalities of the Year in this important year for Košice.

Jesenský named the recently opened Košice Modernism exhibition as one of the highlights of the ECOC project, stressing also that the Eastern Slovak Gallery that hosts the exhibition is one of the “Culture Islands” and one of the biggest projects – the gallery’s reconstruction cost about €3 million and its completion was delayed by one year.

Other big initiatives include the Kunsthalle, involving the reconstruction of a former indoor swimming pool into a hall of art, with Jesenský noting that this was “the first of its kind in Slovakia”. He added, however, that its future as an art gallery is questionable, although it is meant to serve as such for at least five years, because in the basement under the pool there are still hundreds of locker cabinets like the ones used at pools – reportedly for artists to use – but they raise the question whether the new space will be used as a cultural hub or merely as a pool.
The most important investment, Jesenský opined, was the rebuilding of the former barracks from the 19th century into a complex for art and culture, known now as the Barracks/Culture Park. He praised the structure but noted that the main disadvantage of the multi-functional grounds is that it is situated amid a residential area and concerts will have to end precisely at 22:00 so as to not “disturb the night-time peace”.

The Barracks/Culture Park was also named as among the five main positives of ECOC Košice 2013 by Zora Jaurová, the former head of the project who was subsequently replaced by Sudzina. She also noted as important positive contributions: the change in public discourse, new issues, new language and new challenges; increased international cooperation with other cultures; several artistic projects such as the Monument of Folk Architecture by Tomáš Džadoň; and the creation of a few original Slovak works such as the 66 Seasons opera.

Jaurová told The Slovak Spectator that there were also some negatives: abandoning of the original ambitious vision and local politicking; lack of professionalism in execution and inability (or reluctance) to acquire a wider range of valuable collaborators; poorly managed communication, marketing and public relations; the way in which projects were funded and the non-proportionality in allocating resources and lack of transparency; and also the contents and design for several investments projects. She added that she considers the Kunsthalle to be clearly unsustainable while some others such as Barracks/Culture Park and SPOTs are of questionable sustainability in the short- and medium-term.

“We will be able to evaluate the true effects of ECOC Košice only in the course of the coming years,” Jaurová concluded. “Then it will become clear to what extent the city will be able to exploit the investments and the potential reputation acquired due to the project.”